Sherrod Brown visits CWRU, speaks about his past 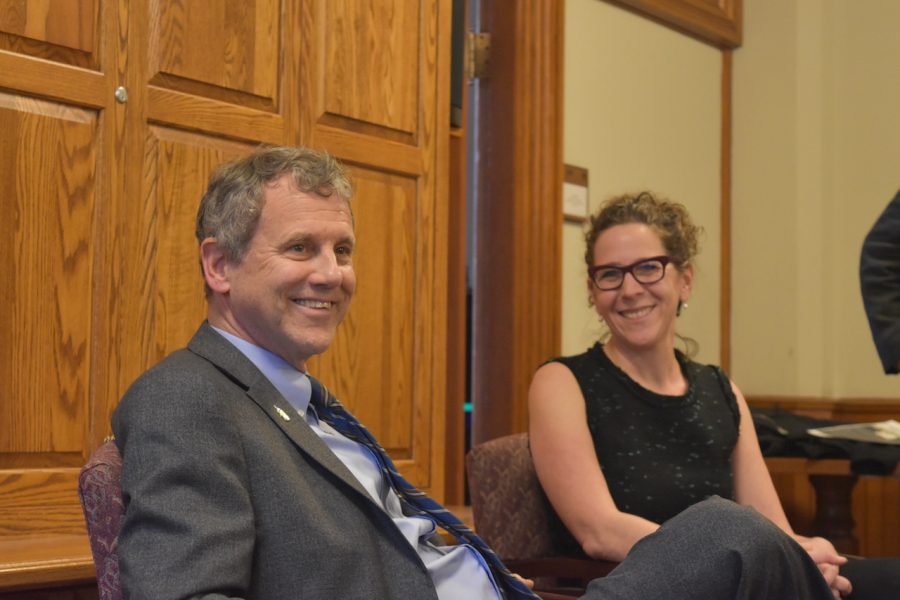 On Monday, Jan. 20, Senator Sherrod Brown visited CWRU to share his experince as a politician and a college student majoring in humanities. Brown not only talked about current political enviornment but also encouraged students to major in humanties.

On Monday night, Jan. 20, Democratic Senator Sherrod Brown was looking for the entrance to Clark Hall, only three minutes before an audience expected him. He and his wife were walking next to Harkness Chapel studying Clark’s many entrances, patiently searching for a door that would actually open and take them to the small room filled with students and staff that had gathered to watch and interact with a sitting senator.

The Baker-Nord Center for the Humanities hosted the hour long question and answer session with the former Representative and Secretary of State for Ohio; Brown has been senator since 2007. From 5 p.m.-6 p.m., he wove anecdotes, advice and political musings into answers for questions ranging from the value of his liberal arts undergraduate education—Russian Studies at Yale University—to his relationship with President Donald Trump and his party’s plans for the next couple of years.

He stressed the importance of not being discouraged by failure, pointing to his loss in 1991 in the race for Ohio Secretary of State and his track record as a campaign employee—he said that “every candidate [he] worked for has lost”—as things to look to and learn from on the path towards greater success.

He also spoke about his roots as a reader, describing how as a young man his brother would send him copies of The New York Times Book Review, which sparked his lifelong interest in fiction. He also credited his wife, Pulitzer Prize-winning writer and columnist Connie Schultz, for aiding in his continued enthusiasm for both fiction and nonfiction.

Brown’s affinity for fiction also served as a launching board into a discussion of politics, as he described his appetite for fiction as greater than some of his colleagues, which opened the door for the audience to ask questions about his workplace. In his own words, Brown’s view of politics is summed up as “both a noble calling and [not].”

He wasn’t shy of criticising the president, describing his ego as “a black hole that no kindness and empathy escapes from,” and said his only interaction with the president was a phone call over which Trump spent a portion describing by how much he won had Ohio by. During the call, Sherrod promised to work with the president on Ohio-related infrastructure issues.

When a staff member asked a follow-up question about how to respond to Trump wanting to cut federal funding for the humanities, Brown responded “well first you resist,” and then surveyed the room to see who’d attended a Women’s March or an airport protest, to encourage further civic engagement.

This is not to say that Brown spent the entire time espousing political ideology. There was a five minute discussion on skills necessary for success in life, during which the senator focused his attention on pushing students towards developing writing skills, describing the necessity of using proper grammar and developing interesting sentences as must-haves for all majors and professions.

He also reminisced about his college days, relishing in the retelling of his discovery of the Russian Studies professor that would convert him into a major and describing the circumstances that led to his surprise victory at age 21 that would make him a representative in the Ohio legislature.

The fact that the vast majority of time was spent on issues that were less partisan and more historical was not lost on some members of the audience that didn’t quite identify with Brown’s politics, including first-year student Mark Hornyak. Hornyak, a Baker-Nord scholar, attended the event because “it would be a really unique experience to hear a senator in [such an] intimate center.”  He found the talk “definitely interesting” and that he was “surprised with how much of it [he] could agree with.”

The event ended with several hands still in the air due to time constraints, but the senator made himself available for questions and photos, staying well after the planned 6 p.m. ending time to meet with everyone interested in speaking with him.