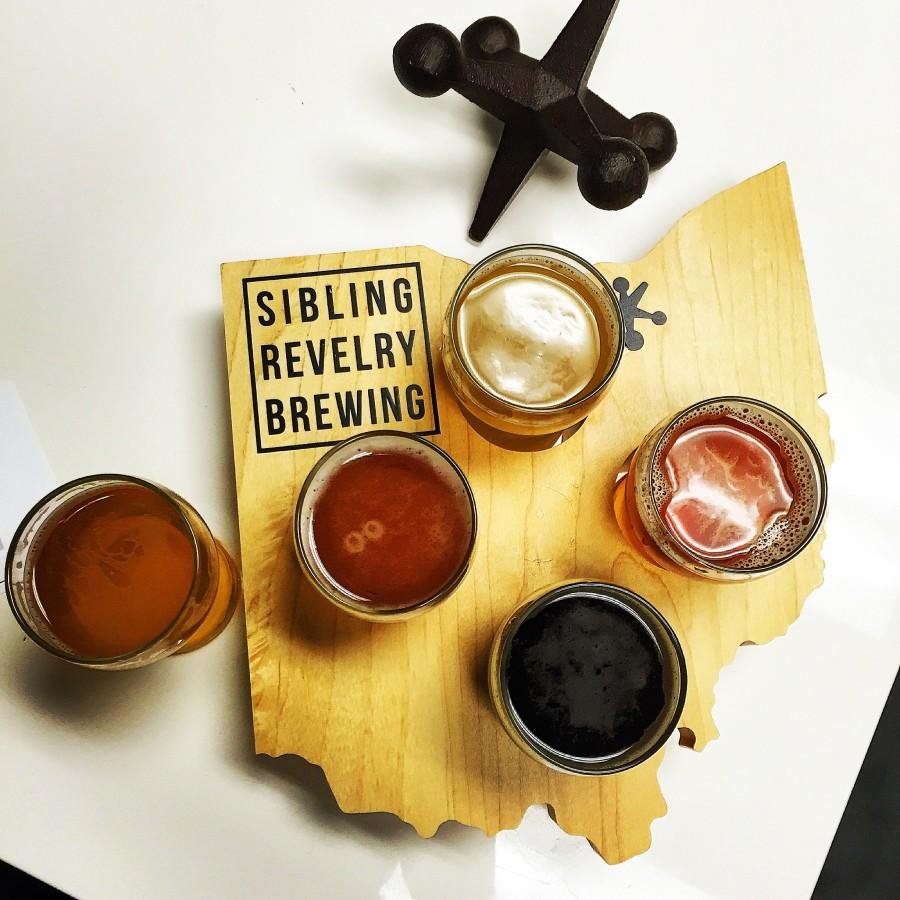 It has been roughly two years since this column first started. Breweries continue to pop up and sadly some I have reviewed have closed. The laws of supply and demand inevitably eat up some breweries due to the sheer volume of them.

Cleveland tastes have changed as well. Cocktails are the new kings and trying to make the coolest and most innovative mixed drink can trump a craft IPA to some Clevelanders.

However, Sibling Revelry Brewing in Westlake, OH, I believe has changed the brewing market completely. I had the excellent opportunity to check out this new addition to the brewery family on their grand opening on Wednesday, Feb. 24.

A beautiful Cleveland skyline mural shines above the bar. Behind the bar is a picturesque window to the giant, 30-barrel brewing system. Overnight, Sibling Revelry has become one of Cleveland’s biggest production breweries, which will start canning their brews this summer.

Cleveland’s Kennedy family, who wanted to venture into the brewing industry, owns the brewery. The name was formed as a “celebration of family and community.”

Carol Sanders, who leads their sales and marketing efforts, first started working at Deschutes brewery for 7.5 years until she moved to New Belgium brewery. From there Sanders worked at Hopunion where she met Pete Velez who shared her passion of starting a brewery in Cleveland.

Velez, brew master at Sibling Revelry, started brewing at Capitol City brewery before learning the trade and sales of a very important part of beer making, hops, at Hopunion. His goal is to offer well-made core beers, such as IPA’s or pale ales, which are made with high quality and drinkability. Velez is not looking to make any beer that tastes like cereal or bacon as created by other breweries.

Most breweries start small and expand their barrel system, but Sibling Revelry did not want to be restricted by size and wanted lots of room to grow not only by volume of beer but room in the building to have yoga or business meetings in their fantastic conference room.

The beers were all standard classics done right. I started with the Cream Ale, an American classic. Cream ales are one of two types of beers created in the United States (the other is steam ale). The brew was smooth with a light cream taste. It was a darker gold color than most cream ales and delicious unlike most domestic cream ales.

My favorite of their brews was the Spring Wit, a seasonal Belgian Style White. Unlike most Wit beers, the tastes of orange were minimal and instead had an amazing lavender taste and aroma. As I wafted in the smell of spring I could taste hints of coriander and other spices. A very floral brew!

One of the best and most drinkable IPA’s I have ever had was Sibling Revelry’s IPA. Clocking in at a strong 7.4 percent ABV, this brew made with Columbus and Simcoe hops. Velez explained that he was frustrated that so many IPA’s are made with the same hops so he wanted to create one with the use of different hops. This IPA had big pine and citrus taste to balance out the hops.

The Pale Ale was made with all American hops but had an English style taste to it, one that was not too dry like most pale ales in the craft beer scene. Though it may be mild it was full of flavor. Even if you only drink IPA’s, you will definitely enjoy this pale ale brewed with magnum, bitter gold, and cascade hops.

Finishing up my beer tour at Sibling Revelry, I had the Dark Ale, which was dark as night in color. It had a smooth ale taste though it resembled a stout in appearance. The beer had aromatic hints of coffee with a roasted finish with every sip.

Sibling Revelry will of course have a big party on national sibling day April 10. Sanders noted that their brews would start popping up in bars as early as this week so be on the lookout for some excellent locally brewed beer coming to a bar near you.