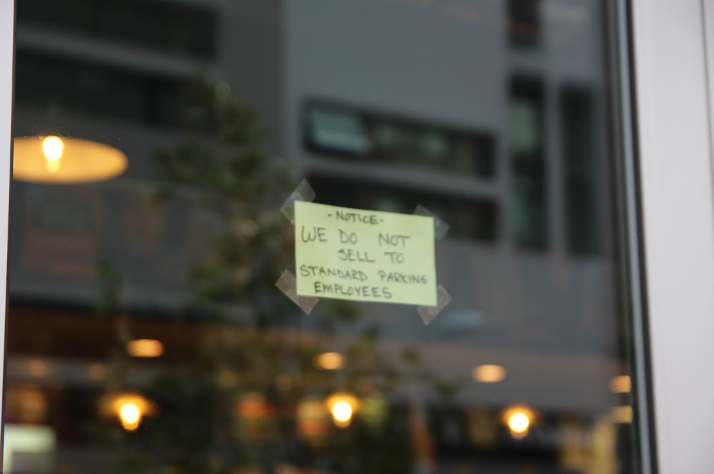 Simply Greek has a note on its window annoucing that it will not serve employees from the Standard Parking company.

Recently Simply Greek posted a sticky note on their window, stating that it will not serve employees from the SP Plus Corporation (SP), more commonly known as Standard Parking, the parking company on and around campus. Pete Moissis, the owner of Simply Greek, took this action to protest SP’s parking charges.

“They hurt all the businesses here by a militant enforcement of parking,” said Moissis. He depicted SP as “revenue generator,” saying employees would purposefully wait on cars whose passes will soon expire and issue tickets right on the spot when it is legitimate to do so.

An employee from Simply Greek reportedly had such an experience from a week and a half ago. Despite there still being four minutes left on his parking pass, which was supposedly perfectly visible to the SP employees, he was still issued a ticket. He said the reason given by the employee who ticketed him was that he didn’t think he would be back on time.

Moissis confirmed that the bad business practice of SP is the main reason why he set the policy not to serve people from the company. Moreover, Moissis said he thinks that SP’s business model is unfair because its employees ticket the businesses in Cleveland that have valid passes. Moissis himself was ticketed even though he possesses a pass that is still valid.

Moissis said that the appealing process to SP is complicated, arbitrary and lengthy. He thought that the company’s hostile actions have a negative influence on the friendly campus environment.

This dissatisfaction towards SP does not seem to be a special case of Simply Greek. An employee of Jimmy John’s said that he was ticketed three times for no specific reasons by SP, so he started using another parking lot.

Since January, complaints have been reported to SP, primarily to the company’s shift supervisor, to Case Western Reserve University and to Triangle Management, but none of them had any effect. SP has actually shortened the free parking time from an hour to half an hour. About his policy of not serving SP employees, Moissis said, “This is the tangible thing I can do to express my displeasure.”