Women’s Basketball rallies to put one in the win column 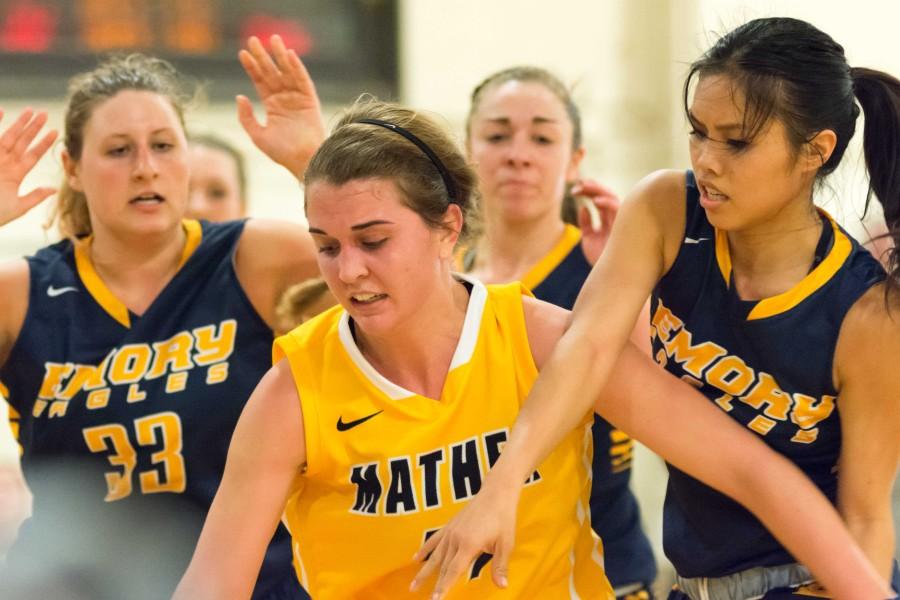 Brooke Orcutt is swarmed by Emory defenders in the opening game of Throwback weekend. Orcutt and the Spartans wore Mather College uniforms for the weekend.

Hard work and persistence pays off. The Spartans, after dropping handfuls of close games as part of their nine-game losing skid, finally broke through by defeating Rochester in the capping game of this year’s Throwback Weekend.

The weekend started in heartbreak for the Spartans, however, as they narrowly missed defeating visiting Emory University, dropping the matchup 61-60. The Spartans were led by junior Laura Mummey, who put up a season high 21 points to lead the Spartans’ offensive push. Joining Mummey atop the Spartan stat sheet, freshman Kara Hageman and senior Brooke Orcutt added 16 and eight points, respectfully. Hageman’s 16 came on a career-best performance, sinking six of her eight shots from the floor. Orcutt filled out her stat sheet with 11 rebounds and seven assists.

The Spartans had seen themselves down early. The team found themselves behind the visiting Eagles 19-8 with just over nine minutes left in the first half. They fought back, refusing to go away, but slipped back into a double-digit deficit before heading into the locker room down 31-20.

The Spartans came out of the locker room on a tear and rattled off an 11-2 run to find themselves down a single bucket with 15:06 remaining. That margin slipped back down to eight over the next five minutes of play, however, before the Spartans responded with a run of their own to tie the game at 48 apiece.

The two teams battled down the stretch and despite the Spartans finishing the game with six of the seven final points, found themselves short by a sole point as time expired, another loss and the fourth by one point since the beginning of University Athletics Association play. Sunday however would see the team finally turn it around.

Orcutt led the Spartans as they faced off against Rochester and put 19 up on the board, and narrowly missed a double-double while pulling nine down off the glass and setting up her fellow Spartans six times Sunday afternoon, as the team placed one in the win column, after overtime play.

Four different Spartans put up double digit points. In addition to Orcutt, senior Berit Eppard posted her third double-double of the year by putting up a career-high 18 points and pulling down 10 rebounds. Sophomore Jessica McCoy hit a season high 17 for the second time this year and Hageman again found herself filling out the stat sheet with 14 points off the bench.

The Spartans found themselves ahead at the half after a hard fought first 20 minutes and entered the locker room up by a bucket, 33-31. The Spartans repeated Friday night’s early success in the second, putting up the first six points to lead by a game high of eight points. However Rochester fought back to eventually tie the game at 42.

Four different lead changes followed until the Yellow Jackets jumped up to a 62-55 lead with under five minutes to play. Refusing to let another one slip through their fingers, the Spartans forced a 64-64 tie with 1:20 left in the game. However with 42 seconds left, Rochester found themselves ahead and underestimated the Case Western Reserve University defense as the Spartans forced a turnover, and after a foul, McCoy found herself at the line with 5.9 seconds left on the clock and sunk both from the charity stripe to send the game into overtime.

At the end of overtime, highlighted by a bucket off a strong drive into the paint for Eppard, the Spartans walked out of the building with an impressive and well-deserved 79-72 win.

The Spartans will hope to keep up the winning as they finish the season Saturday, Feb. 28 against rival Carnegie Mellon University. Tip-off is at 3 p.m. at Horsburgh Gymnasium.