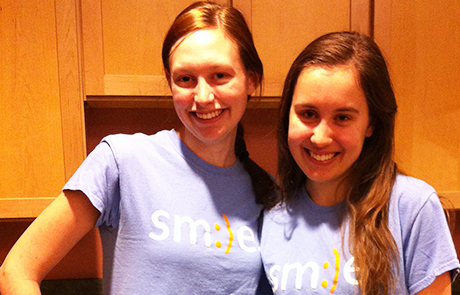 When Gabrielle Kelly was in elementary school, there was no competition against her in the classroom, or when she played the “scar game.” From a distance, it may just look like she’s worn too many headbands, but Kelly doesn’t make an effort to hide the perfectly hairless line that arches around her head from ear to ear. The scar serves as a constant reminder of the cranio-facial surgery that saved her life from a birth defect called craniosynostosis and the role chance played in her access to surgery.

Kelly, a second-year undergraduate pre-med and nutritional biochemistry major at Case Western Reserve University, doesn’t take anything for granted. She has realized how lucky she is to be alive in the United States where she has access to simple, life-saving medical procedures. When she learned about Operation Smile, an international children’s medical charity that provides reconstructive surgery for children born with facial deformities, she knew she couldn’t just ignore the chance to give back.

“I just became more empathetic toward people who were less fortunate than me,” said Kelly, president of CWRU’s chapter of Operation Smile since fall 2012. “I’m involved with it because I’ve personally been affected by cranio-facial disorders… It’s just really a treatable cause.”

Established in 2007, the mission of CWRU’s chapter of Operation Smile is to raise awareness about cleft disorders and to raise money for the international umbrella organization. At the international level, Operation Smile is a force of medical professionals who provide reconstructive surgery and medical care in over 60 countries for children born with facial deformities such as cleft lip and cleft palate.
According to the organization’s website, every three minutes, a child is born with a cleft, and one in 10 of those children will die before their first birthday.

“It’s not a condition that you think of as being deadly, but it actually can be very deadly,” Kelly said. “When you see the pictures of the kids [affected by cleft disorders] it just looks like they may have a little bit of a deformity and socially they might not be accepted, but actually a lot of them have problems with eating, drinking, just basic life functions because their internal cavities are all kind of combined,” Kelly said. “Overall, the first thing that people think of when they see you is your face.”

According to Kelly, the surgical procedures take about 45 minutes and costs $240 through Operation Smile. “The idea is that it’s something that’s very cheap compared to [something like] curing cancer. It’s just something that’s very tangible,” she said.
Operation Smile just wrapped up their latest event last Friday afternoon in the Hovorka Atrium with a speaker panel on facial deformities. About 50 guests attended, and the panel of experts featured geneticist Suzanne Debrosse, pediatric plastic surgeon Gregory Lakin, orthodontist Manish Valiathan, and otolaryngologist James Arnold from University Hospitals’ Rainbow Babies and Children’s Hopsital. The panel was moderated by Karl Rishe, Operation Smile’s advisor and assistant director of residence life for the First Year Experience. Rishe, also a personal patient of cleft palate surgery, provided a middle-ground for all of the questions.

“I think one of the most exciting things about [the event] was one of our speakers, Dr. Lakin, was really interested in getting people involved with the cranio-facial team at University Hospitals. He extended a big opportunity to anyone there if they wanted to get involved with any research, volunteering, or shadowing,” Kelly said.

Additionally, the CWRU chapter of Operation Smile raises money and awareness through community activities such as bake sales and selling t-shirts. Their monetary goal this year is to raise $500, and according to Kelly, they are well on their way.

“There are going to be a lot of upcoming opportunities for people to get involved with doctors specifically, so it’s going to be a really good pre-medical, pre-dental organization for anyone who wants to actually get into the hospital and see how to treat these deformities,” she said.

With regards to the chance she was given, Kelly never forgets why she’s the president of Operation Smile. “It’s a gift to know that you’re in a position that thousands and thousands of people were never given,” she said. “It definitely puts life in perspective.”

Prepared in partnership with the Student Leadership Journey Council, Spotlight On… is a recurring piece that features Case Western Reserve University student organizations.