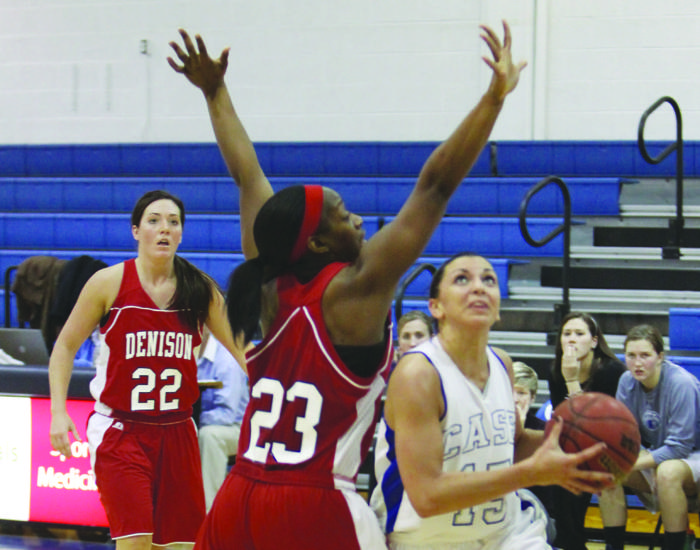 If you weren’t paying close attention, you might mistake the tension in the gym for that of a WNBA game, rather than the Spartans going against the Eagles and Yellow Jackets. On Friday, Jan. 20, the Spartans’ women’s basketball team was barely outplayed by the University of Rochester, the No. 5 team in the nation by D3hoops.com. Two days later, the Spartans lost another highly contested game to the Emory University Eagles. The losses dropped Case to .500 on the season at 8-8; the Spartans are now 1-4 in the UAA with their lone victory against Carnegie Mellon 63-51.

To the casual observer, the final score in each of these contests might indicate one-sided affairs, but that was hardly the case. Indeed, even the scores at halftime weren’t indicative of the high level of competition. Facing a deficit of 24 points versus Rochester with six minutes left in the first half, the Spartans battled back to come within three points late in the second half.

Similarly, the Spartan women found themselves down seventeen points to the Eagles partway through the first half, only to fight their way into the lead with six minutes left in the second half.

Senior forward Erin Hollinger was the Spartans’ leading scorer in both of the contests, with 17 points against Rochester and sixteen points against Emory. “The key is getting back into the game one point and one rebound at a time,” she said. “We’ve been doing well at focusing on each possession and not making [the deficit] bigger than it is.”

The Spartans were certainly able to focus on each possession during their comebacks, solidly winning the rebound contests during these streaks, although solid rebounding is usually a result of well-played defense.

“Runs are stopped on the defensive end; that is where we start our runs as well,” said senior Chelsea Peck. “Our offense is generated from our defensive stops at the other end of the floor.” Peck added nine points and five rebounds versus Rochester, as well as seven points and six rebounds against Emory.

The Spartans practically put on a free throw clinic in both games. Against the Yellow Jackets, Spartans went 14 for 17 (82.4 percent) with no player missing more than one attempt. Similarly against the Eagles, the Spartans went 12-14 (85.7 percent), far outshooting Emory (68.0 percent).

It is impossible to ignore the rookie contributions to the Spartans’ ability to run with top-ten competition. Freshman forward Erin Reynolds played well off the bench against Rochester.

“The Rochester post players were extremely talented, and [Reynolds] came into the game and was able to defend and make some amazing stops. She handled the pressure well and had some amazing clutch rebounds,” said Peck.

Against Emory, freshman guard-forward Rachel Beaty was able to pull the Spartans to within 11 points of the Eagles with a pivotal play on the offensive end of the court. Taking on multiple defenders, Beaty somehow managed to get the ball in the basket and draw the foul.

Against Rochester, junior guard Erica Iafelice was able to put up all-around good numbers. Playing in all but two minutes, Iafelice scored 13 points and had six rebounds, five assists, four steals, and only two turnovers. Freshman guard-forward Brooke Orcutt took advantage of her time on the floor, hitting a three in both games and missing only once.

One sore spot for the Spartans is shooting. Other than free throws, the Spartans tended to go on long droughts of poor shooting. With seven minutes left in the first half against Emory, the Spartans were shooting a dismal 19 percent from the field. In addition, the Spartans were, up to this point, on the negative end of the turnover margin, with seven turnovers committed versus only one by Emory.

It seems what Case needs is simply consistency. They ended the game shooting 31 percent from the field, indicating that once they got into a shooting rhythm, they were far more competitive.

“Offensively, we just need to continue to work to finish our open looks in order to improve our shooting percentage and put more points up on the board,” said freshman Berit Eppard.

The Spartans travel to Massachusetts today to take on Brandeis University and then head to New York to play NYU on Sunday. Case’s next homestand will be the week following, when they host a doubleheader with this weekend’s teams; the Judges come to town Friday, Feb. 3 at 6 p.m. and the Violet arrive for a matchup Sunday, Feb. 4 at 2 p.m. Those games will be part of CWRU’s Throwback Weekend where the Spartans will host Disco Night on Friday and Girls’ Sports Day on Sunday. The women will wear uniforms commemorating Mather College.