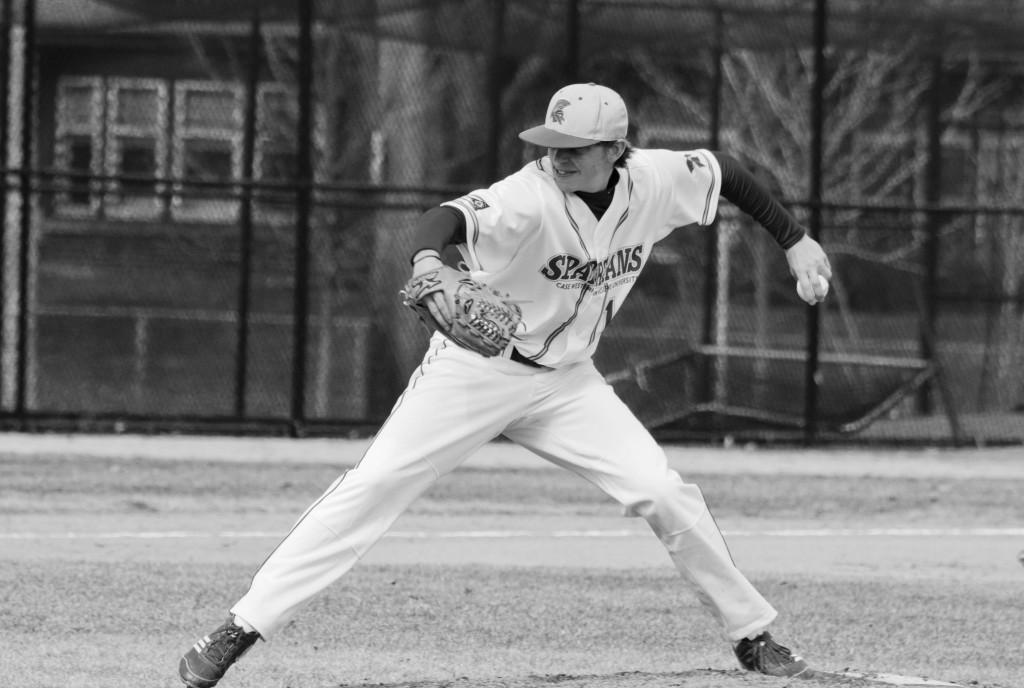 Opening the final week of the 2012 regular season, the Case Western Reserve Spartans rode a fifth-inning grand slam from junior center fielder Paul Pakan to their key 7-5 victory against local rival John Carroll University. On Tuesday, April 24, the Spartans arrived at Schweickert Field holding a 4-2 record in their last six games. Looking to end the season on an excellent note, the Spartans began their three game series with JCU with the victory.

The Spartans improve to 26-14-1 overall, with only a Saturday, April 29 home doubleheader with JCU remaining on the season schedule. Case’s 26 total victories equals the second highest single-season win total in program history. With the loss, the Blue Streaks fell to 16-15.

Case jumped out to a 2-0 lead in the first inning as senior designated hitter Bobby Marko led off with a ground-rule double, then came around to score on an RBI single to left by junior shortstop Matt Keen. Keen stole second before cleanup hitter Sam Alexander reached base thanks to an error, which allowed Keen to score from second and giving the Spartans a 2-0 advantage. The game went into a stalemate for four innings as both teams were kept from scoring.

In the fifth, the Spartans loaded up the bases with a single by sophomore second baseman Andrew Frey and back-to-back walks by Marko and Keen. Pakan then stepped to the plate and shot his team-leading seventh home run of the spring to left field, pushing the Spartan lead to 6-0. However, the Blue Streaks cut the lead in half in the bottom of the fifth. After a walk by designated hitter David Lykens and a double by right fielder Ryan Konsler, JCU responded with an RBI single by shortstop Huddle and then a run-scoring fielder’s choice by second baseman Bobby Sabatino. The Blue Streaks tagged on one more run to the inning as center fielder Joe Veltri doubled to left field for their third run.

In the bottom of the sixth, with runners on first and second, Konsler singled to left field. An error by left fielder Alexander allowed Konsler to advance to third, and two runs crossed the plate. In just one play, the Blue Streaks got within one run of the Spartans. In the seventh inning, the Spartans tacked on an insurance run when Keen lined out to center field for a sacrifice fly. Sophomore Jose Vega came out of the bullpen with a clutch appearance to preserve the victory.

Freshman Edward Abramson picked up the win on the mound to improve to 4-2 in his rookie season. The righty threw five-plus innings, allowing three earned runs on six hits with one strikeout. Vega tossed a career high 3.2 scoreless innings with three strikeouts to earn him his team-leading ninth save.

At the plate, freshman utility player Andrew Gronski went 2-for-3 with a walk while Alexander went 2-for-4 with a RBI. For JCU, Konsler and Huddle each collected two hits and an RBI. Patrick O’Brien took the loss on the mound by surrendering five earned runs over six innings of work.

The Spartans and the Blue Streaks will meet again this Sunday, April 29, starting with a 1 p.m. doubleheader at Nobby’s Ballpark as Case looks to improve its NCAA Tournament resume.