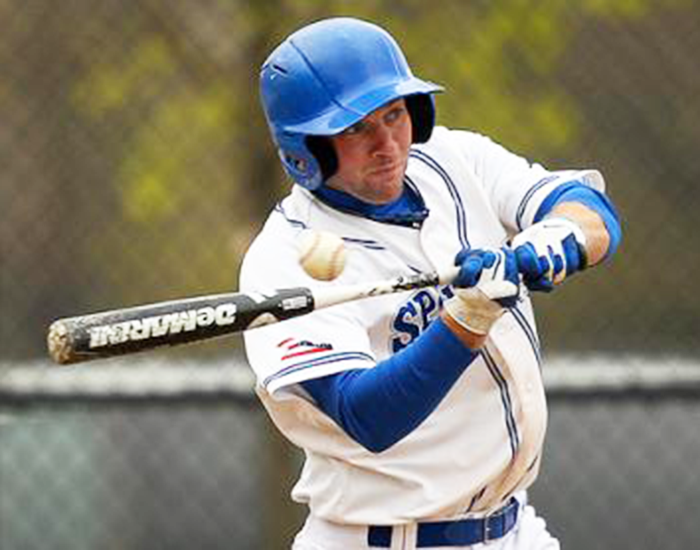 Senior centerfielder Paul Pakan picked up his second straight UAA All-Tournament honors as the Spartans won a share of the conference championship for the first time in program history.

The Case Western Reserve University baseball team won a share of its first ever University Athletic Association Championship last week, finishing 5-3 in the conference tournament. The Spartans will split the Association title with the Washington University Bears. The Bears, who also finished 5-3, were unable to pick up a win in the final game of the tournament.

The Spartans defeated the Bears in both of their games last week on their way to the best finish in program history. The Spartans (7-4, 5-3) and Bears (9-6, 5-3) finished tied atop the conference standings while Emory University (10-9, 4-4) and the University of Rochester (4-4, 4-4) finished just a game behind the two champions. Brandeis University (4-10, 2-6) rounded out the tournament field in fifth place.

The Spartans opened the tournament on a mission, squeaking out a 7-4 win over Emory, followed by a 12-0 dismantling of the Yellowjackets. Brandeis would halt the Spartans momentum in extra innings with a 10 inning 4-2 victory early on Tuesday. The Spartans bounced back later that day and run-ruled the Bears 13-3 in seven innings. Rochester took one back as the Case bats cooled off in a 4-3 pitcher’s duel between Yellowjacket Stephen Cool and Spartan Jamie Hora. Another blowout in an 11-0 win over Brandeis, followed by a 6-2 win over Washington, left the Spartans at 5-2 in the conference, guaranteed at least a share of the conference title with a win over Emory on Saturday. Case was left disappointed after leading 2-1 in the fourth; the Eagles would score three in the fifth and two more insurance runs in the seventh to top the Spartans 6-2.

With their fate out of their own hands, the Spartans could only watch as Washington took on Rochester in the tournament’s final game on Sunday morning. The Yellowjackets came out swinging with the game on the line and were up 4-1 until the Bears tied it with three runs in the bottom of the sixth. Rochester would add an insurance run in the seventh and three more for good measure in the ninth and would shutout the Bears down the stretch. The win moved Rochester into a tie with Emory for third place and left Case and Washington tied at 5-3, forced to share the Association title.

The Spartans were led by their pitching staff as the squad combined for a 2.48 ERA during the tournament, the lowest in the conference by .69 runs. In addition, the Spartans pitching staff allowed just 23 runs for the week, nearly half as much as second place Emory and Washington, who each let up 42 runs.

The pitching staff was led by freshman Neal Krentz, who led the conference with two wins and no earned runs allowed in 10.1 innings. Krentz had a pair of unearned runs on his record and recorded four strikeouts to two walks. Senior southpaw Jarrett Gish was fourth in the UAA in ERA, allowing 1.12 runs per game. Gish went 2-0 on the week and struck out 10 batters in 16 innings of work. Krentz and Gish were both tapped as members of the UAA All-Tournament Team. They are both first-time honorees.

Sophomore Kevin Johnstone was the other top pitcher for the Spartans, starting two games with a pair of no decisions. Johnstone finished fifth in the conference with a 1.42 ERA, allowing two earned runs in 12.2 innings on the mound.

The Spartan bats had an exceptional week and finished second in batting percentage, hitting .291 as a team. The Case sluggers brought the power all week long, as the Spartans had the most runs (56) and home runs (5) in the tournament and the second-most hits, doubles, and triples.

Senior centerfielder Paul Pakan was the Spartans top hitter and the only representative in the top ten for hitting on the week. Pakan batted .406 at the plate, finishing seventh in the association. Pakan scored five runs and racked up eight RBIs on 13 hits, with a UAA-high four doubles and two home runs. Pakan was named to the UAA All-Tournament team for the second straight year.

Senior shortstop Matt Keen hit for power, notching two doubles and two home runs on nine hits for nine RBIs. Keen hit .300 and tallied a UAA-high 12 runs. Keen pulled off a rare feat and stole home against Brandeis; it was one of Keen’s two steals in three attempts. Keen was also named to the UAA All-Tournament team for the fourth time in his career. Keen set the school career record for runs during the week.

The Spartans will return to action, after having the week off, when they host Heidelberg College this Saturday, Mar. 23, for their home opener. The first pitch is scheduled to be thrown out at noon for the first game of the doubleheader and at 2:30 p.m. for the second game. Case will then travel to Heidelberg for a one-off to finish the three-game series on Sunday, Mar. 24 at 1:00 p.m.

The Spartans will also host Muskingum University on Mar. 27 at Nobby’s Ballpark at 3:00 p.m.