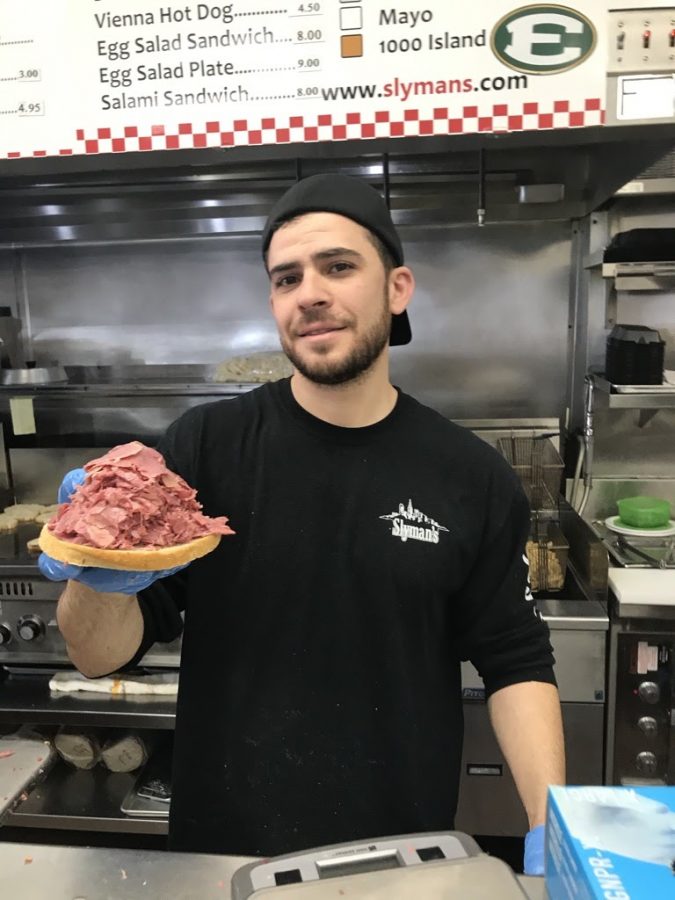 Slyman’s manager Sam Mahfouz holding up just one half of one corned beef sandwich. The restaurant sells between one and two thousand sandwiches a day.

Slyman’s Restaurant and Deli is a no-nonsense establishment. It takes up two rooms on the ground floor of a building on the corner of St. Clair Ave. and E. 31st St. The interior is red, white and black with menus covering several of the walls, the kitchen visible behind a counter, all flat top grills and piles of corned beef.

Breakfast is served Monday to Friday from 6 a.m. until 11 a.m., and then lunch takes over until 2:30 p.m. There is no dinner service.

We visited Slyman’s on Martin Luther King Jr. Day. Though it was a Monday in the restaurant’s slowest month, we were lucky to get a table. Tyler Null, a relatively new addition to the restaurant’s staff, told us that in the morning he’d pulled out four buckets of corned beef just to get ready for the day, and that each of those buckets had weighed between 80 and 90 pounds.

“We go through between one and two thousand sandwiches a day,” explained Sam Mahfouz, Slyman’s manager. Mahfouz has been with the restaurant for 14 years, and he’s seen a lot from his perch behind the counter.

The menu touted Slyman’s as “the place the stars come to eat,” and Mahfouz has the celebrity encounters to back it up. When asked who the biggest name was that he’d personally met, he turned to the rest of the kitchen and they started bouncing names off each other.

“Well there was the vice president,” one called out, pointing to a picture of former Vice President Joe Biden on the wall, posing next to Sen. Sherrod Brown.

“[Celebrity cook] Rachael Ray, she came, too. Oh, and Bush.” Then President George W. Bush, that is.

Other names listed included LeBron James and food show host Alton Brown. The team from “Man v. Food” had been in just two weeks before, prepping for an episode that is still months from release.

With all the talk of celebrity visits and the absurd number of sandwiches produced per day, Slyman’s really had a lot to live up to, taste-wise.

I ordered the reuben, crinkle-cut fries and a cup of coffee. I didn’t quite order properly, Mahfouz later told me, because I ordered the reuben as is. For his money, it’s better to trade the sauerkraut for coleslaw, a preparation he calls the Rachel reuben, after an ex-girlfriend who preferred hers that way.

Still, I was pretty darn happy with my improperly ordered sandwich. It came out fast, a literal mountain of paper-thin corned beef piled between grilled rye with a little cheese on top. The horseradish that came in a plastic container on the side was delicious and intense, too much of it on a bite would require a full cool down period for your mouth.

Everything that Slyman’s served us gets ordered thousands of times a day, and for good reason. The reuben was over $16, but contained so much food that the second half of my sandwich went home with me, a situation that happens so often that the restaurant has to-go boxes piled high on the server station.

If there’s anything bad I have to say about Slyman’s, it’s that I wish the pickle was a little crunchier and that they served breakfast a little bit later. I was excited about trying the corned beef hash, until it was pointed out to me that 12:20 p.m. was, in fact, after 11 a.m.

The pickle thing is a personal preference vote, but the breakfast timing has a much easier solution—I’ll just have to go back.