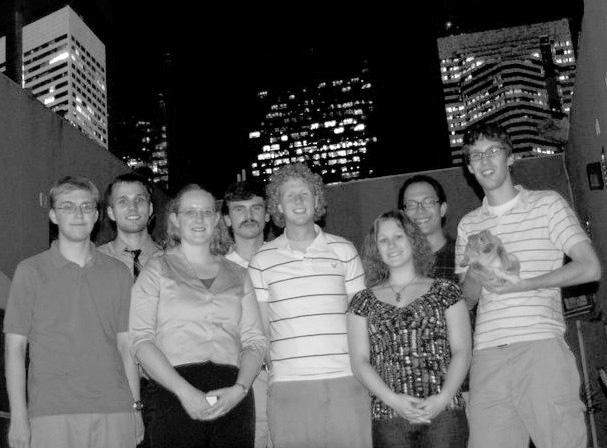 Case Western Reserve University’s materials science department is probably the smallest in the engineering school, with fewer than ten majors per class, and it doesn’t get much press. There are certainly advantages to having such a small department: classes are smaller, it’s easier to get involved in research, and you get to know your professors better. You also get to know your peers extremely well—you take the same classes, you agonize over the same lab reports, and, in our case, you stay in the same hotel rooms (and fight over the weak Wifi).

This year, roughly 20 percent of the materials department’s undergrads (seven students, that is) spent their fall break in Houston at the Materials Science and Technology conference, MS&T. MS&T is one of the year’s biggest materials science events, hosting hundreds of students, professors, scientists, and industry professionals from around the world. It was also our first professional conference, so we weren’t sure what to expect.

The trip to Houston was in itself an adventure. We met outside the dorms around 3:45 a.m., left campus on the 4:15 Rapid, then took off from the airport at 6—and only one of our number was pulled aside for a full-body scan. We stayed in a small, family-run hotel—the cheapest we could find—which turned out to be quite pleasant. However, most of our time was spent in the conference center getting the full MS&T experience. There were several events geared for students, including a Q&A session on graduate school and an expo hosting dozens of employers, such as GE, Corning, Nucor Steel, and the Department of Energy. Many were accepting résumés for internship, co-op, and full-time positions. We proudly sported Spartan blue at the MS&T student social, and enjoyed wine and cheese with several of our professors at the CWRU alumni reception. We definitely left the conference with improved networking skills, not to mention numerous business cards.

We also attended lectures on a variety of current materials research and applications. As the name suggests, materials science is a broad field, encompassing everything from metals, plastics, and ceramics to glass, composites, and nanofibers. Short lectures, grouped into series based on subject matter, ran from about 8 a.m. to 5 p.m. every day. There were dozens of topics, including new and improved biomaterials, composites for aerospace applications, and material failure during natural disasters. The lectures were presented by graduate students and faculty from universities across the globe, as well as researchers from national laboratories and private companies. Most of the lectures were very interesting and informative despite their brevity. They certainly offered a broad glimpse of recent innovations in materials science, although there was far too much information to take in at once.

When we weren’t busy absorbing knowledge at MS&T, we were meandering through the streets of Houston or hanging out in one of our hotel rooms watching Shrek and The Bourne Supremacy. There wasn’t much time for sightseeing, but we had a lot of fun doing “materials bonding” as we called it (we got a lot of mileage out of that pun). The highlight of the trip, however, was definitely the pet rabbit the hotel owners kept on the second-floor terrace—he makes an appearance in almost every photo we took.