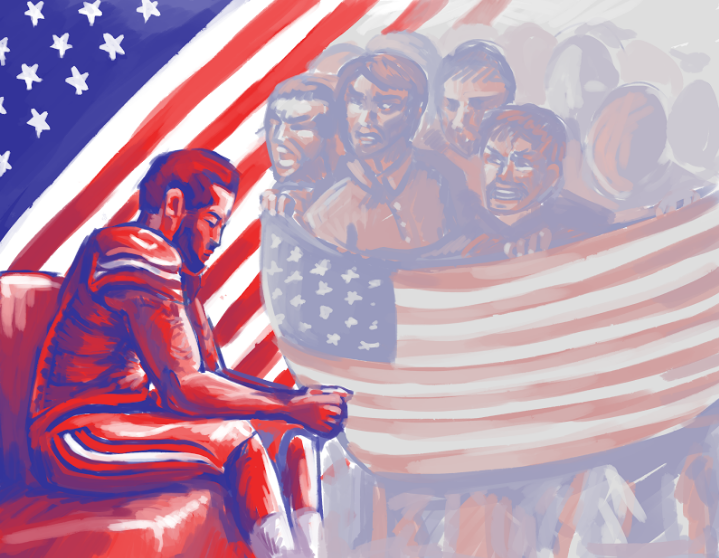 San Francisco quarterback Colin Kaepernick has transformed from NFL quarterback to a walking political talking point over the last couple of weeks. In case you missed it, he has refused to stand for the national anthem and salute the flag not once, but twice.

“I am not going to stand up to show pride in a flag for a country that oppresses black people and people of color,” Kaepernick told NFL Media. “To me, this is bigger than football and it would be selfish on my part to look the other way. There are bodies in the street and people getting paid leave and getting away with murder.”

Politicians and journalists around the country took on the topic, with smaller time analysts and bigger talking heads such as Tomi Lahren weighing in.

Turning red whilst yelling at the camera, Lahren expressed the anger that other Americans have directed at Kaepernick during the past couple of weeks. She turned Colin’s protest into an attack on white people, whom were never mentioned in his initial statement. She even called him a racist for talking about oppression from police officers, who can be of any race.

Everyone should really just calm down. Seriously, calm down.

People are far more outraged at Kaepernick than the racial injustice he speaks out about.

Not saluting the flag became a personal attack on everything America stands for. Old Glory has been equated to whatever is politically conservative at the moment.

In the name of American patriotism, many have called for Kaepernick to be removed from the league, something completely antithetical to freedom of speech.

But they’re completely missing the point.

Being patriotic has nothing to do with the flag, but holding America responsible to its greatest struggle since its inception: equal rights for all. The real patriots of America have held this country to that standard, protesting and fighting for equality for everyone.

Protesters have been criticized again and again for their “aggressive” tactics. But Kaepernick’s actions didn’t show aggression. He peacefully protested, as encouraged to do, but has still faced harsh criticisms. This is to be expected. No matter how peaceful the message or the medium, there will always be opposition.

Some will brand Kaepernick as a well-paid pro-athlete who caused a ruckus over something that they do not consider to be important, but those who listened know that at the core, his actions are truly patriotic.

Despite the criticisms, his actions have received support. His jersey has catapulted to the bestselling spot after hardly selling any in the past year.

To those who feel like Kaepernick’s stance is yet another sign that their country is being taken away from them: It isn’t. You can’t take this country back. This country belongs to all of us as Americans. It was never solely “yours” to begin with.