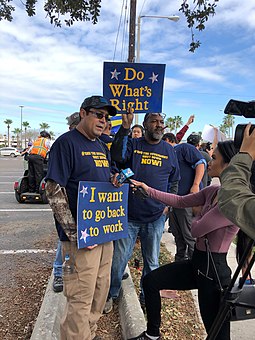 There’s something seriously awry when around 800,000 people aren’t able to go to work despite their eagerness to do so. It is impossible to frame this occurrence as ethical or even a means to an end.

Before delving into why our government has been shut down, we should recognize and agree that a government, let alone that of the most powerful nation on earth, should not have provisions where it will not operate the way that ours has over the past few weeks. By function alone, the problem is silly to ponder. It would be like constructing a personal budget that you can use only if you and your complete opposite agree.

Why does this continue to exist? I’m sure there are several answers to how this immorality has persisted, but none of them are sufficient to explain why your family or others may not eat. If there’s ever been a reason to do better, this is it. It is equally simple and crucial that we avoid continuing down the same path.

It is worth mentioning that this is a drastic increase from just a couple of months ago when the number was lower than 10,000 apprehensions. But, it is also important to note that these numbers are forever fluctuating and even in their current state they are the lowest numbers of their kind that we’ve ever seen.

In knowing these numbers, it is hard to rationalize any significant change to our already existing infrastructure. Because with data this promising, U.S. Customs and Border Protection is clearly doing an exceptional job with securing the safety of this nation.

Even at the height of illegal apprehensions, 200,000 illegal aliens seems quite a pitiful threat to the nearly 300 million people who call the continental United States home. There would be a reason for frantic worry if a population the size of China threatened to move to the United States. At that point, I’d rally for a wall. “Build it as high as you can,” I’d scream. That many people would instigate a significant imbalance in our economy and livelihood.

So, I offer yet another query: why the general panic when things seem to be going well? What are the grounds for a brand new fortification of our border? And why does it hinge upon law-abiding Americans, our own citizenry, being able to go to work?

On that note, however, it should be said that building a wall is not immoral. Every day we live within and depend upon walls to secure our safety.

In this case, I believe building a wall that stretches the distance of our southern border would be flagrantly unnecessary, but immoral is an extreme I’m not willing to concede. We are a nation that is supposed to protect its own above all else. If there is legitimacy to a threat at our southern border—not a measly caravan of around 100,000 asylum seekers—then we should and must build a wall. But, the “crisis” as we are currently portraying it is pitiful.

The government shutdown, of course, has immediate effects, but the long term consequences are far more frightening. The most significant issue is that the trust in the American dollar, which affects its value, will struggle to recover. With the government being partially shut down, which includes two agencies that deal with the movement of money, the U.S. Departments of Treasury and Commerce, the trust in the U.S. economy declines and its strength over outside economies weakens. There are many layers as to why this is problematic, the most critical being that it weakens our economic impact on a global market that is dependent on the strength and stability of the U.S. dollar. The longer this lasts, the more the United States relinquishes its highly coveted strength and stability, which affects not only the local economy but the global one as well.

Every day this shutdown continues to linger, for what is an insignificant “crisis,” Americans suffer. From what I can tell, we need more protection from our own than from those who are trying to come in.