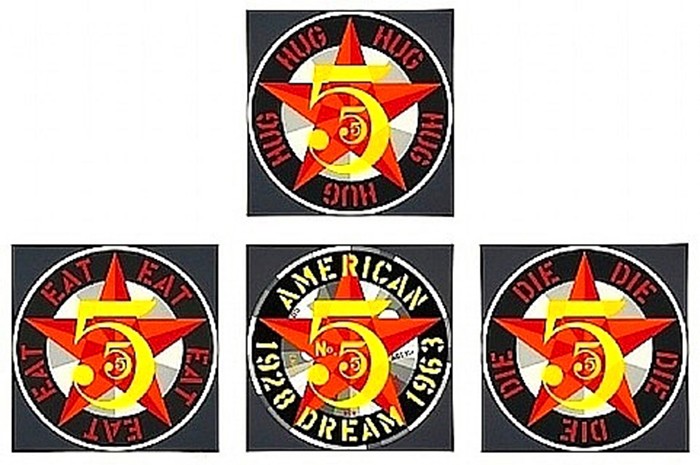 The white walls near the Jolly Scholar restaurant in the entrance of Thwing Center are looking barer than usual. The Case Western Reserve University Police Department is currently investigating the theft of one of the prints comprising “American Dream #5” by Robert Indiana, the artwork that used to decorate this space.

Student shift workers at Thwing Center reported seeing the full set of paintings at 5 p.m. this past Saturday. However, by 10 p.m. on the second day of Homecoming Weekend, the set was one print short.

Adorning the first floor entryway of Thwing East, the prints were donated to the university many years ago and have been a building staple as long as Thwing Center director Casey Medley can remember.

The series features four square prints surrounding a centered print with the works’ title. The other four prints contain the words “Err,” “Eat,” Hug,” and “Die.” The “Die” screenprint was the subject of the bandit’s thieving efforts. While Thwing Center administration believes the theft was meant to be humorous, the $5750 value of the set of prints is no laughing matter to Medley.

“If the culprit brings it back in good shape, we’ll just forget about it,” she explained. “All we want is the print back.” According to Medley, the culprits are guaranteed a safe exchange by leaving the painting outside of her office on the second floor of Thwing West, up the stairs from the LGBT Center.

While this robbery is the first of the academic year for Thwing, it is not the first time thievery has struck the center. Over past years, a marble-top table, a television, and other pieces of artwork have been illegally removed from this student hub.

Because of past burglaries, many offices, such as those belonging to the Undergraduate Student Government and Media Board, require card access to enter. While this may protect these offices from experiencing theft, the decorations and furniture in the center’s hallways remain vulnerable.

According to CWRU police sergeant Jeffrey Daberko, the painting theft remains under investigation by the department. In the meantime, the faded outline of a perfect square fills the void left behind by the vacated artwork.