Snowball is a hit 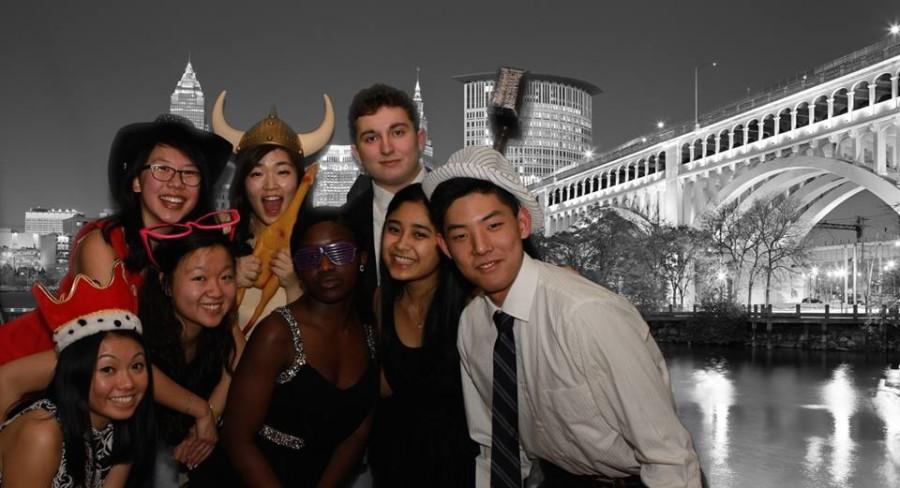 Students pose with props in the Snowball photo booth, one of the attractions at the annual dance downtown.

On Friday, Feb. 19, the Class Officer Collective (COC) hosted the annual Snowball dance, which featured a James Bond theme this year. Although the theme was not in the least bit evident (except for the remixed theme song played at the beginning) the dance was a huge success, possibly the most successful social event thrown by a student organization this academic year.

For starters, plenty of people showed up: 14 buses full of students were driven to The Westin Cleveland Downtown. There has probably not been such a large gathering of students from all classes at any prior event this academic year. Graduating class was not a dividing factor, allowing for a great melting pot of students who were full of energy and yearning to have a good time. Who knew belting Miley Cyrus’ “Party in the USA” could unify every soul in the room? It probably helped that a good portion of attendees were buzzing with energy from the open bar offered to students over 21.

A surprisingly good factor of the night was the food. At the start, there were just meats and cheese, leaving me unimpressed. But as the night got into full swing, waiters starting appearing with plates of different food including spring rolls, chicken drumsticks and sliders. In addition, there were also cheesecakes stations where people could customize their cheesecakes with different toppings. The food was high quality and it was plentiful, satisfying everyone.

Music-wise, the playlist was the typical music played at dances with a DJ that took requests. This being said, it still could have been better. The transitions between the songs were extremely rough and didn’t make sense most of the time. Going abruptly from a hype song such as “Turn Down for What” by Lil John to “All of Me” by John Legend without a warning or transition isn’t the best move.

Overall the actual dance portion was great. The people on the dance floor were happy and energetic, and despite the music the night went well for attendees who were there to show off their moves.

The transportation system in place for taking students back to campus was a different story. It was without a doubt one of the worst systems I have encountered. Instead of the 14 buses present that took us to the hotel, only three poorly timed ones were in commission on the way back. This left a lot of people outside in the cold, waiting. A bus would come and fill up quickly before anyone knew what to do.

People who were waiting in the front for the longest time would miss the bus because it would stop in front of those who just arrived outside. It got to the point where a large number of students gave up on the buses and ordered Ubers or took the RTA. Some girls were so tired of waiting they started taking off their heels and squatting on the ground.

Needless to say, this is an aspect COC must work on for next year. However, there is some silver lining to the situation; the system that was used was not at all acceptable for the number of students present, but at least attendance skyrocketed this year.