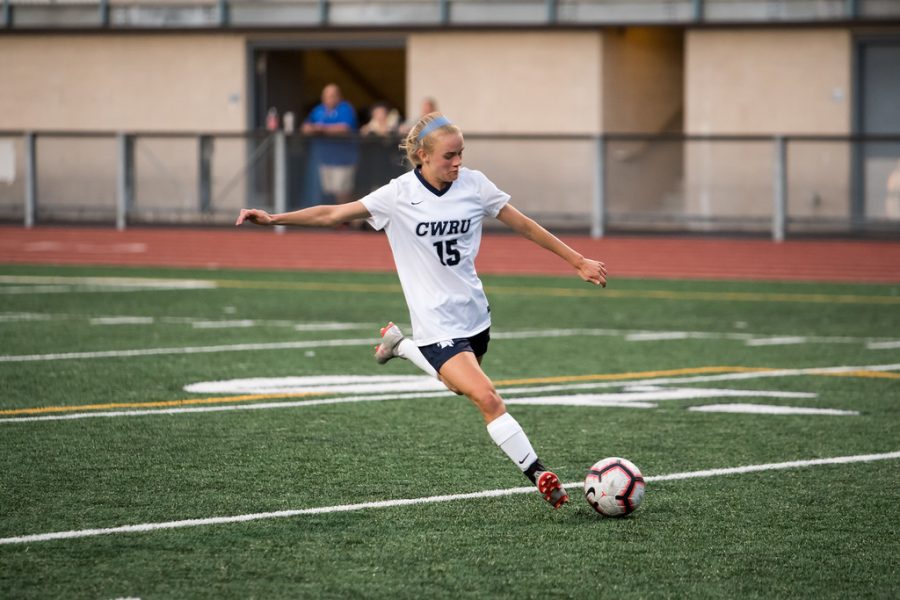 For the first women’s game, Emory struck first, when the offense found a striker open at the left side of the box and shot at the top right side for the first goal of the game. Fourth-year goalie Lauren Unterborn then bounced back by saving the next two goals. At the 27th minute, second-year Anika Washburn received a cross in the box, but the opposing goalie managed to block her shot. Emory then lengthened the deficit to 2-0 when two recently substituted players crossed to each other in the box for a goal. Leading the Spartan’s unwavering defense, Unterborn then saved the shot by Emory the minute after, ending the game with seven saves. The Spartans came close to scoring in the second half when Washburn crossed the ball to first-year Johanna Dunkers, but a diving save by the keeper blocked the shot, and the Spartans never came back from the deficit.

Determined to shake off their 0-3 UAA record, the Spartans turned up the heat against Rochester, with Washburn scoring two goals, deciding the fate of the match in the first 15 minutes. First-year Merry Meyer drilled a pass to Washburn at the top of the key, who crossed two defenders and drove the ball deep into the net for the goal. Washburn then scored the second goal off a penalty kick, tying for second-most goals scored in a season. At the 19th minute, the Yellow Jackets responded with a goal of their own off a corner when the defense was unaware. CWRU won the game 2-1.

The men played their games directly after the women, continuing the fiery Spartan fighting spirit. Against Emory, both teams failed to score in the first half. In the second half, third-year Seldon Magruder gained possession of the ball towards the opposing goal, jumped over a defender’s tackle and shot it over the goalie to the top right corner of the goal. The Eagles responded with a header from a corner pass to tie the game 1-1. Magruder then received a pass in the center of the box, boxing out his defender, dropping it off to a running fourth-year forward Zachary Senft, who drilled the ball through the diving opposing keeper’s hands. Physicality was a tough factor in the game for both teams, as the teams had a total of 28 fouls and four cards called. In the last two minutes, Emory managed to tip in the ball into the goal off a header pass. Both teams struggled to score in overtime, combining for 11 shots, but time ran out for the deciding goal. First-year Jackson Kallen totaled a career-high nine saves, manning the tight Spartan defense.

The Spartans found themselves in the same situation against Rochester, as both team’s defense’s won out. The Spartan defense survived multiple corner kicks by Rochester in the first 20 minutes, then Magruder and Senft counterattacked but their shots were not converted. The Spartans continued attacking in the second half, attempting three shots in the first three minutes. The first two were blocked, and a header shot by second-year Peter Dernelle off a corner was saved by the opposing goalie. The Yellow Jackets stole the show by scoring off of a corner in the final seconds of the game. Both teams were close in shots, but the Spartans had one more, 12-11.