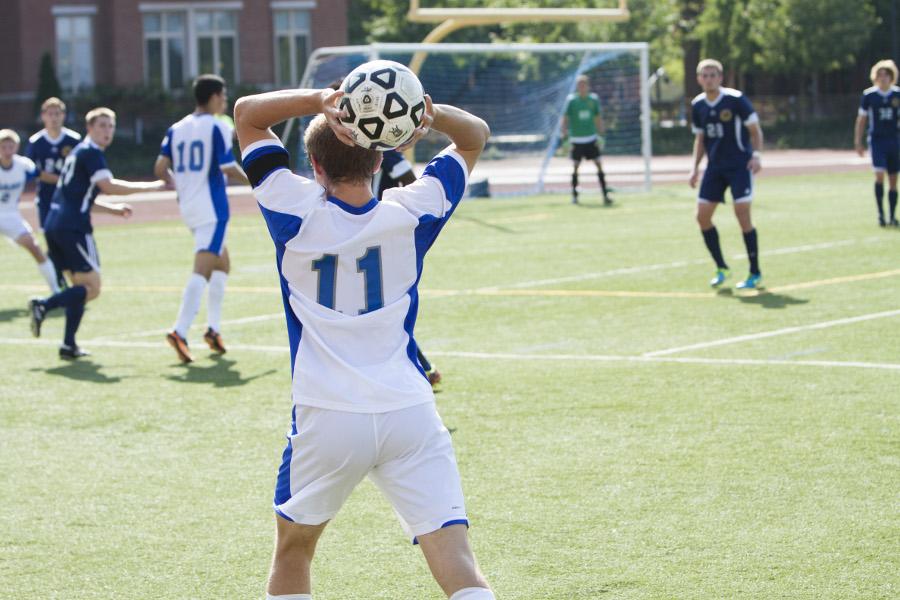 Zach Broujos throws in the ball during a game last season. A loss to John Carroll ended the team's current win streak.

The Spartans took the lead in the 29th minute when junior forward Matthew Zembas outraced two Capital defenders to meet a pass from junior midfielder Chris Cvecko. Zembas, less than 10 feet away from the net, drove it in to end the scoreless tie.

Cvecko powered the offense for the majority of the game, adding a goal of his own later on at the 40-minute mark on a penalty kick after being fouled in the box.

“Zembas, Cvecko, and [sophomore forward] Josh Prosser were especially dangerous in the attack for us,” said head coach Brandon Bianco after the weekend match.

The Spartans dominated for the first 45 minutes, but allowed Capital to score their lone goal on a corner kick midway through the second half. The point allowed was freshman goalkeeper Calvin Boyle’s first of the year.

Case found the tables turned when they traveled to John Carroll University. Down 2-0 after two early goals, the Spartans regrouped at halftime and came out strong to start the second half.

Freshman midfielder Michael Balog put the Spartans on the board in the 52nd minute with a goal from 18 yards out, assisted by Prosser. Five minutes later Balog was at it again, scoring the equalizer to tie the match at 2-2. The goals were his third and fourth of the season, making him the current team leader in that category.

John Carroll scored off a set piece header in the 83rd minute. It was the final goal of the game for either team.

The Spartans now own a 4-2-1 record. With conference play approaching, the time to iron out flaws is now.

“We will continue to work to improve on our ability to finish teams off. We’ve had opportunities to score decisive goals and haven’t been sharp enough to finish the plays,” explains Bianco. “Thankfully, we’re creating really good chances. The goals will come.”

The Spartans will see action again on Saturday, Sept. 20 when they travel to Ada, Ohio to take on Ohio Northern University. Their next home stand will come a week after that at 7 p.m. when they take on Wilmington College of Ohio.