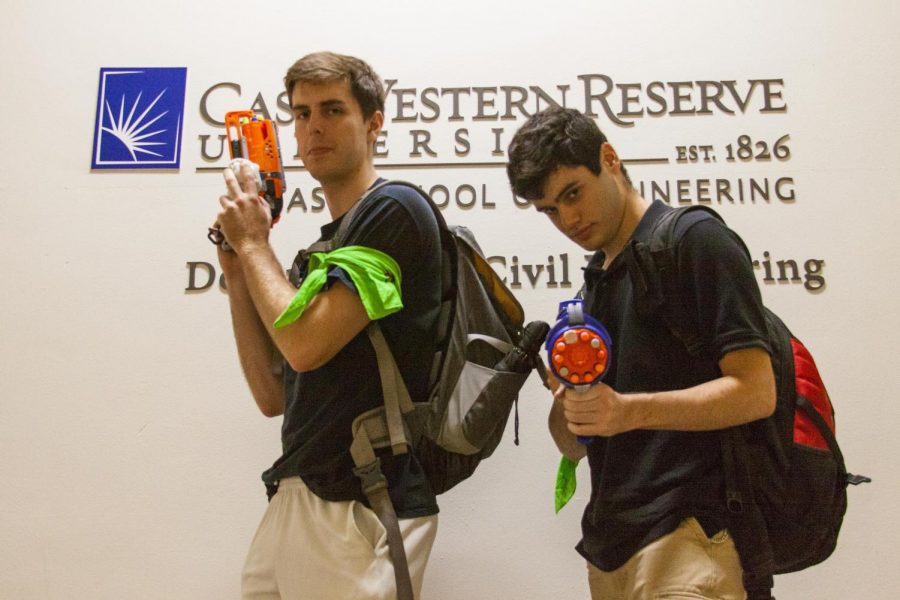 Have you noticed a bunch of students running around with NERF blasters in green bandanas for the past week and a half? You’re not imagining things. These students have been playing Humans vs. Zombies (HvZ), a 10-day long, campus-wide game of tag that simulates the zombie apocalypse.

The game is about humans trying to survive the apocalypse and zombies trying to increase their ranks. The game starts with five “Original Zombies” (OZs), whose objective is to tag as many humans as possible. You can recognize an OZ by their bandana, which will be green and pink and worn on their head.

Zombies tag humans by touching them. However, humans can prevent being turned with NERF blasters and balled-up socks. If a human hits a zombie with a NERF dart or a sock, the zombie will be stunned for 15 minutes, during which time they are not able to tag anyone.

HvZ Core, a committee created by the executive board of Big Games Club, plans and runs HvZ each semester. HvZ Core chooses the rules, story, dates, missions and pretty much everything else involved in making HvZ happen. They also run other weekly events, such as Nerf Wars, when weather permits.

Missions are hour-long games where humans and zombies compete to achieve objectives that occur every other day during HvZ. These missions impact day-to-day play as the winning side receives rewards for their triumph. This year, the humans won the first two missions.

Every semester, the game has a different story.  The overarching story drives the gameplay for each mission.

“This semester our story is all about dinosaurs, where our campus has become ‘MesoZombic Park.’ Just like Jurassic Park, we’re in a dinosaur theme park, but the dinosaurs (zombies) got out of their enclosures,” said third-year computer science major and Core member Dylan Briggs.

On Monday, HvZ held “When a mommy dinosaur and a daddy dinosaur…,” its third hour-long mission. According to the mission statement, the dinosaurs gained access to the mating grounds region of MesoZombic Park. This area of the park was still functional during this mission and held genuine dinosaur eggs. The mating grounds were most of the North Residential Village section of campus, with the area near the first year dorms and upperclassmen housing in play.

As the mission started, the humans dispersed from the Leutner Pavilion picnic tables, their base, to go stand near the nests. A few stragglers came to the mission late, meaning that they did not receive rubber bands and would become zombies for the rest of the game if they got tagged. Other than that, the first 10 minutes were mostly just humans standing around.

After those first 10 minutes things started to pick up. Four zombies chased three humans across Leutner Pavilion. A few humans were scouting out nest locations and had to sprint away after finding a bunch of zombies. Some scouts did not survive and returned to base shortly after the zombie chase across the pavilion. After the dead scouts returned, a bunch of other humans also returned to the base because they had been killed.

At the base, humans discussed the mission and how zombies got them. It felt strangely like Christmas. Christmas music was playing, including “You’re A Mean One, Mr. Grinch,” and a human was dressed up in Christmas lights and wearing a Santa hat.

The zombies became more active toward the end of the mission. They were chasing humans all over the pavilion and humans desperately tried to stun them.

Around 35 minutes in, a bunch of zombies rushed the pavilion, killing several humans in the process. Soon after, a couple humans stunned several zombies. This stirred excitement among the dead humans at the base, who were cheering on their teammates. Unfortunately, around the 40 minute mark, the last human died and the mission ended. The zombies won. The zombie reward for this mission was a two minute reduction for the stun timer, reducing it to 13 minutes, and getting Crawford Hall as a touch-to-spawn point, meaning that when a zombie touches one of the pillars of Crawford, they get immediately respawned, rather than having to wait 13 minutes after being stunned.

This result is not surprising, as historically the third mission is anyone’s mission, and humans virtually never win the full game. Since the game is supposed to be like the apocalypse, the odds are heavily stacked against the humans.  In fact, the only time recently that the humans have even come close to winning was in Spring 2018. However, winning missions does increase the odds for the humans.

All of this might sound like something you might want to participate in, but you may be unsure if you want to participate or not due to safety concerns. Fear not, HvZ Core’s number one priority is safety. Because of this, HvZ rules explicitly state boundaries of play, as it is a campus-wide game and campus includes roads and other potentially dangerous places. The rules describe how to be safe at crosswalks, how to keep both players and non-players safe and everything else pertaining to the safety of those playing the game.

Still not sure if you want to play? Playing HvZ is a great way to meet people, according to third-year mechanical engineering major, and HvZ Core member Eddie Conger, Fifth-year music and chemistry major and eighth semester player Ethan Reid said that it’s a great way to liven up the bland daily routine of going to class and doing work. Overall, it’s just a lot of fun.

If you’ve decided that you do want to play next semester, here are some tips and things to remember from veteran players.

“One tip I have for humans is always make sure to look behind you.  One for zombies is to think where you would be as a human, and look there,” said Conger.

“Have fun. Go to missions, and if/when you get tagged, remember that being a zombie is at least as much fun (if not more fun) as being a human,” said Reid.

“HvZ can be as much of a time commitment as you want. You can go about your day as normal, just trying to survive or get tags in between classes without adding significant time to your schedule. Or you can go all out and hunt for tags whenever you can, or go out of your way to survive,” said Briggs.

“Remember to go to classes, stay healthy, and have fun!  Too many people take one side of the game to seriously. Try [being a] human and [a] zombie and have fun doing it,” said Conger.

Whether you decide to play or not, at least now you know why people wearing bandanas have been chasing each other around campus with NERF blasters.