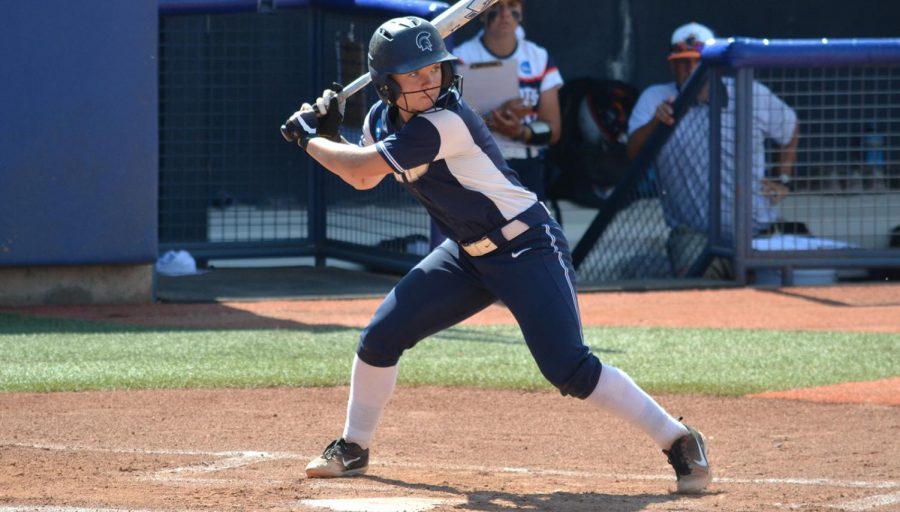 Fourth-year student Nicole Doyle steps up to the plate to bat. The Spartans have opened their season with a .500 record through their first 10 games and recently traveled to Arizona for their spring break trip, which they finished with a 4-2 record.

One season after a program-best sixth place finish at the NCAA Division III Championships, the Case Western Reserve University softball team began their 2019 campaign with a target on their backs.

Yet, in spite of a grueling non-conference schedule, the Spartans have opened the season with a .500 record through their first eight games, including a 4-2 record during their spring break trip to Arizona.

The season did not start cleanly, though. The team saw their first action on March 2 at the Pio Classic in Kentucky, ultimately losing both of their games during the chilly afternoon.

In their season opener, the Spartans fell in five innings to Thomas More University, 8-0. The contest was close for the first four innings, with CWRU only trailing by two entering the top of the fifth. However, that half inning ended like the rest for the Spartans: scoreless. Thomas More took advantage of the opportunity, gaining momentum early in the inning and exploding for six runs, thereby ending the game two innings short. The CWRU bats did not fare any better in the second game of the day, losing 5-1 to Transylvania University. In total for both games, the Spartans only recorded seven hits.

Quickly, though, Head Coach Josie Henry and her squad put that weekend behind them. They traveled to Tucson, Arizona for the Tucson Invitational from March 11 through 15. On the first day of the competition, CWRU showed the dominance that earned them a bid to the national championship tournament a year ago, defeating the No. 15 team in the country, Central College, by a score of 8-0 in just five innings.

The Spartans jumped on Central early, scoring four runs in the bottom of the first. Their bats were mostly quiet for the next three innings, but in the bottom of the fifth, they erupted for four more runs to end the game. Third-year pitcher Ilissa Hamilton pitched all five innings and only surrendered two hits. Third-year first baseman Nicole Carty went 3-for-3 from the plate, scoring two runs and driving one in herself. CWRU lost the second game to Millikin University, 5-4. First-year designated player Liv Thomas hit her first career home run in the game.

Games were canceled on Tuesday, and the Spartans had Wednesday off, so they returned to play on Thursday. CWRU won their two games by two runs each, first beating George Fox University 7-5 and then prevailing over St. Mary’s College 4-2. Against George Fox, Hamilton earned the win, and Carty came on in relief in the seventh to earn the save. Second-year catcher Dusstyn Reynolds hit a double that scored two Spartan runners in the bottom of the sixth, putting the game out of reach for George Fox. In the second game against St. Mary’s, second-year pitcher Sidney Brannam entered the game in relief of Carty and held St. Mary’s scoreless for her 5 2/3 innings.

On their final day of competition in Arizona, the Spartans split their two games. They began the day with a 7-5 loss to Buena Vista University but capped off a successful trip with a 5-0 victory against the University of Wisconsin at Platteville. In the win, Brannam pitched a shutout.

After returning from the trip, the Spartans split a doubleheader at home against Baldwin Wallace University on Wednesday, March 20, losing the first game 5-4 in eight innings and winning the second 14-4 in five innings. They will be at home again on Saturday, March 23 to host Kenyon College.