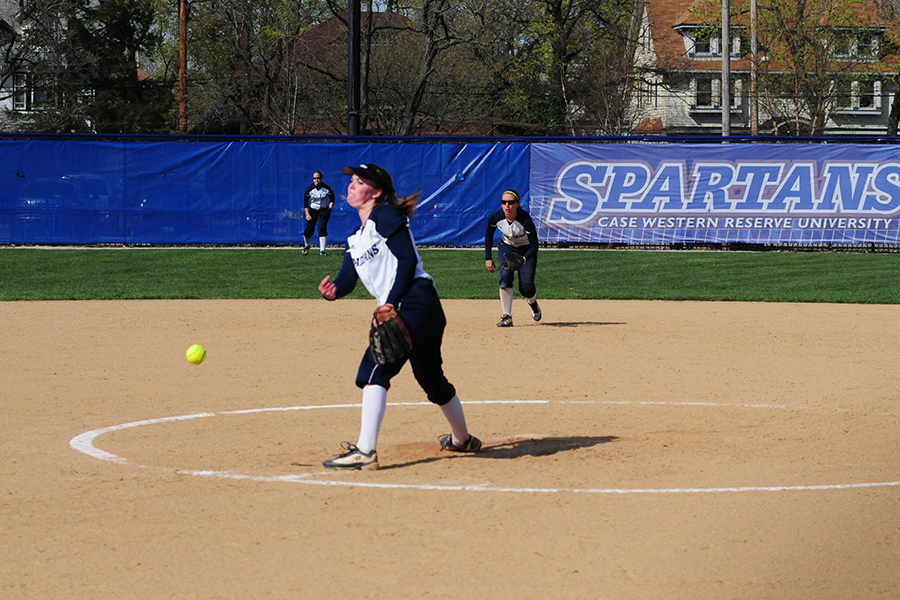 Sophomore pitcher Rachel Taylor won her 15th game of the season and earned UAA Pitcher of the Week for her performance in a 5–3 win over Hiram.

Improves to 6–0 at Mather Field this season

The Spartans (20-13) stayed red hot with seven wins in a row and 11 victories in their last 12 contests.

The two losses dropped the Terriers to 10-20.

O’Brien was 3-for-4 in game two with a solo homer in the fifth that helped invoke the eight-run “mercy rule.” Earlier in the contest, the second-year Spartan recorded her first of two stolen bases to surpass 2011 graduate Beth Andrasik’s school career record of 34.

O’Brien now has 36 in less than two full seasons.

In addition, freshman third baseman Rachel Komar continued her torrid pace at the plate with a combined 4-for-7 performance and is now 17-for-30 (.567) over the last eight games.

In game one, the Spartans got on the scoreboard first in the home half of the second inning. Sophomore pitcher Rebecca Taylor drew a one-out walk, moved to second on a groundout and came around to score on a double to left center off of the bat of sophomore leftfielder Ashley Parello.

The Terriers answered in the top of the third with three runs via back-to-back-to-back homeruns from Miranda Wright, Jessica Bolanz, and Angela Perella and built a 3–1 advantage.

Case sliced the deficit to one with a single tally in the third on a two-strike single up the middle from junior catcher Amy Taylor to plate Komar, who drew a walk. However, Hiram starting pitcher Taylor Miller wiggled out of a bases loaded jam with a groundout and kept the visitors in front by one, 3-2.

The score remained that way until the bottom of the fourth. Freshman designated player Kristen Klemmer walked, moved on a sacrifice bunt, and easily jogged home on Komar’s homer to right, her third four-bagger of the spring.

Not done yet, the Spartans tacked on an insurance run, an unearned tally, in the sixth. Klemmer led off with a single and scurried to second on a Terrier error. After a pop-up, Komar poked her third hit of the contest to the opposite field to plate Klemmer.

Rebecca Taylor improved to 15-10 on the mound with her 15th complete game of the spring. The right-hander allowed three runs on five hits and three walks with five strikeouts. Taylor now has 25 strikeouts versus just five earned runs in her last 21 innings of work.
Miller (2-9) took the loss for the Terriers with five runs, four earned, on seven hits with four strikeouts and five walks.

For the game, Komar was 3-for-4 with three runs batted-in and two runs scored.

In game two, the hosts batted around and jumped out to a three-run lead in the bottom of the first. The big blow came from freshman designated player Erin Dreger and her two-run single down the left field line. Dreger eventually came around and scored the third tally of the frame on a miscue by the Terrier catcher.

The Terriers cut the Case advantage to two in the following inning with a run via a one-out homer to right by Perella.

However, the Spartans put two runs on the board in the bottom of the second. Much like the opening inning, O’Brien singled and stole second once again. O’Brien scored on a groundout and Komar promptly produced a steal of home plate after she followed O’Brien’s lead with a single of her own.

In the third, the hosts continued to push ahead with a pair of unearned runs and made the score 7-1.

Neither team scored in the fourth. Then in the fifth, the Spartans ended the game as O’Brien led off the inning with a homer to center, and Dreger scored on a double to left center off the bat of sophomore right fielder Gena Roberts.

On the mound, freshman Rebecca Molnar pitched all five innings and surrendered just one run on two hits with a walk and a career high-tying six strikeouts.

Offensively, Roberts was 3-for-3 with a double. O’Brien was 3-for-4 with two stolen bases, while Komar was 1-for-3 with three steals as the Spartans pounded out 12 hits.

The Spartans will travel to Wittenberg University on Saturday for a doubleheader before returning home for a four game home stand to finish the season. Case will host Bethany College on Senior Day on Sunday, April 28 with the first pitch at 2 p.m. The Spartans will then close their season against Geneva College on Tuesday, April 30.