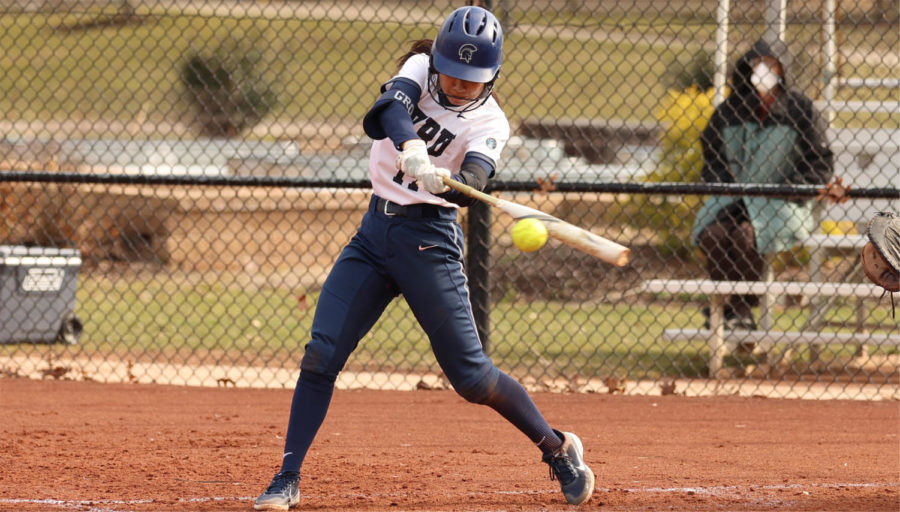 Decisive runs by second-year KaiLi Gross (above) buoyed the Spartans to victory in their matches with NYU, the latest in a series of victories for the softball team.

Since opening the season with a lackluster 2-6 record, the Case Western Reserve University softball team has been tearing through opponents. After splitting a two-game series against the University of Mount Union on March 15, the Spartans swept four games in the Pioneer Classic hosted by Transylvania University in Lexington, Kentucky. With their weekend victories over John Carroll University and New York University, the Spartans hold a 11-6 overall record and a 3-0 UAA record.

First-year Pitcher Kylie Hosey led the way against John Carroll on March 23 with her first career no-hitter, pulling the Spartans to a 5-1 victory. Both teams were scoreless in the first inning, but the Spartans put two runs on the board in the second. Second-year catcher Jordan Manworren hit a double and first-year outfielder Isabella Russo slammed a single, allowing Manworrent to score. Russo eventually stole third and scored on a groundout from fourth-year Grace Yeung.

In the third inning, John Carroll scored without hitting. The Spartans responded with two runs on a double from Manworren, with second-year Stevie Rieger and third-year Amanda Riely scoring. After hitting a single in the fifth inning, Rieger singled and stole to third base. She then scored on a sacrifice fly from fourth-year Liv Thomas to put up a final score of 5-1. The game was called to a close at the top of the sixth inning due to storms.

Two days later, CWRU opened with conference play against NYU at home and won the game 7-4. Rieger and Riely both singled in the first inning, with an errant pitch from the Violets allowing Rieger to score. Another wild throw from the left fielder allowed Riely to touch home plate again, putting the Spartans up 2-0.

NYU came back with two runs, but the Spartans answered back. Yeung scored on a sacrifice fly from second-year Kaila Nutter, putting the Spartans back up 3-2. Hosey led the defensive charge in the third and fourth innings, holding NYU scoreless while the Spartans scored three runs in the third. Though the Violets scored one run each in the fifth and seventh innings, it wasn’t enough to top the Spartans.

The game was an all-around effort as each of CWRU’s seven hits came from different batters. Hosey pitched six strikeouts and allowed just two runs.

NYU’s mistakes resulted in their epic demise, as seven of CWRU’s eight runs were unearned. After a scoreless first inning, the Spartans scored four runs. Miskey put the score on the board. An error from the NYU first baseman allowed two more scores. Nutter rounded out the second inning scoring after second-year KaiLi Gross hit a double.

The Spartans scored two runs in both the third and fifth innings. Rieger scored after Manworren hit a double and fourth-year Liv Thomas touched home plate on a first-and-third steal play in the third inning. Gross scored off a sacrifice bunt by Rieger in the fifth. Rieger then scored on a throwing error to finish the game early.

On March 27, CWRU finished their sweep of NYU in a tight 5-3 win. Riely’s single in the first allowed Gross and Rieger to score for a 2-0 lead. Gross took the momentum into the second inning and scored on a groundout while Rieger pushed the lead to 4-0 with a run-scoring double.

NYU roared back in the third with three runs on a run-scoring single and a two-run double while holding the Spartans scoreless.

Fortunately for CWRU, it seemed that NYU ran out of steam for the rest of the game. Manworren added a run off an infield single in the fourth inning. Neither team scored for the last three innings as the Spartans came away with the series sweep.

Hosey was named the UAA Pitcher of the Week and the Spartan Club Athlete of the Week after pitching 16.0 innings and striking out 15 batters last weekend. Currently, Hosey leads the conference with 48 strikeouts in 59 innings. She also boasts a 1.90 ERA, which is the second lowest in the UAA.

The Spartans will hit the road on April 1 for their second UAA series, this time against the University of Washington in St. Louis. The team is slated to play one game on Friday, two on Saturday and their fourth on Sunday. CWRU will then return for a four-game homestand against Emory University from April 8-10.