Softball sparkles with the return of the sunlight 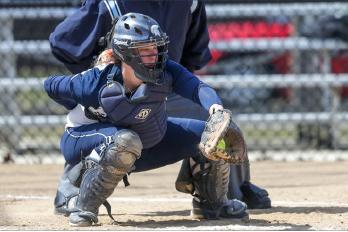 As the season progresses, the Spartans softball team continues to step up its game. The team finished the past week with three wins in four games, with a couple of wild finishes thrown in for good measure. At the individual level, shortstop Makenzie Lein is on the precipice of school history; she has now scored 110 runs in her collegiate career, just three runs shy of the Spartans record held by Carla Kinyon.

They stormed right out of the gate in the first game, scoring four runs in the first inning, and building up a 7-2 lead by the third. Pitcher Annie Wennerberg took it from there, surviving a three run scare in the fourth to secure a complete game victory. The second game was never in doubt for the Spartans, with a five run outburst in the opening frame setting the tone. By the fourth inning the team had built up a 13-0 lead and invoked the varsity run rule when Westminster failed to score in the fifth, completing the doubleheader sweep.

Over the weekend the Spartans hit the road again to play Marietta College in another doubleheader, splitting a pair of thrilling games. The first game remained scoreless until the bottom of the fourth, when Marietta broke through for two runs. After scoring one run in the fifth to cut the deficit in half, Wennerberg helped her own cause at the plate with a two run double to give the Spartans a 3-2 lead. The Spartans scored another run in their half of the seventh, pushing their lead to 4-2 with three outs left to go. Unfortunately Wennerberg couldn’t contain Marietta’s bats as they rallied for three runs, highlighted by a walk-off two run triple by Kelsey Kallenborn, to win the game.

The second game featured more of the same in terms of late inning drama. Although the Spartans struck first, Marietta pushed across two runs in the third inning and two more in the fourth. The Spartans were still down 4-1 when they came to bat in the sixth, but they were far from done. An RBI single by Ashley Parello cut the deficit to 4-2, and the Spartans completed their rally with two runs in the seventh. Rachel Komar delivered the tying hit, plating pinch runner Kristen Klemmer with a triple. Only one extra inning would be required, as the Spartans exploded for five runs in the eighth. Komar delivered once again with a three run single. Although Marietta threatened to rally in the bottom of the inning, pitcher Rebecca Molnar induced a double play grounder with the bases loaded to end the game.

After all of the craziness, the Spartans now sit at 15-9 on the season with plenty of action just on the horizon. They hope to squeeze in their home opener this Saturday at Mather Park against The College of Wooster, weather permitting. The Spartans played a double header against Mount Union on Wednesday winning both by scores of 8-1 and 6-3.