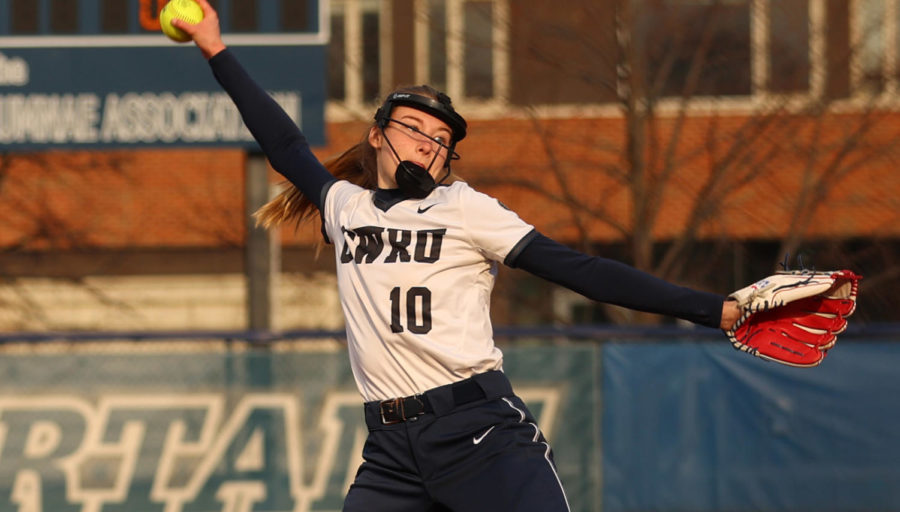 First-year pitcher Lexi Miskey was honored as the UAA Pitcher of the Week for allowing a batting average of just 0.157 against Washington.

Courtesy of CWRU AthleticsThe nine-game win streak was not meant to last for the Case Western Reserve University softball team, as the Spartans posted an even 2-2 record this past weekend against No. 25-ranked Washington University in St. Louis. The two teams went back and forth, with Washington winning the first game 7-2 while the Spartans answered with a 7-2 victory. In the third game, Washington squeaked out a 2-0 win, but first-year pitcher Lexi Miskey shut out Washington in the fourth game, leading to a 5-0 Spartan victory.

For the first game, both teams remained scoreless until the fourth inning. The CWRU defense was no match for the fiery Washington hits as they managed to score five runs, four of which came in a grand slam. After another scoreless inning in the fifth, the Bears scored two runs in the sixth, taking their 7-0 lead. The Spartans managed to get on the scoreboard in the seventh inning. Second-year catcher Jordon Manworren hit a double that allowed second-year outfielder Stevie Rieger to score. A single from fourth-year Grace Yeung scored Manworren, putting the final score at 7-2.

Miskey only allowed two Bears to reach bases in the first four innings and just a solo home run in the fifth inning to cut the Spartan lead to 3-1. Unfortunately for the Bears, CWRU exploded with a four-run inning in the seventh. Third-year Carli Tucci reached second base off a double and ultimately scored on a bunt from Rieger. Gross, who had reached third base following Tucci’s score, plated following third-year second baseman Amanda Riely’s sacrifice bunt. Manworren’s double sent Rieger to home plate for the third run of the inning. A single from fourth-year third baseman Liv Thomas allowed Manworren to score the Spartans’ seventh run.

Washington scored just one run in the seventh, and the game ended 7-2 in favor of CWRU. Manworren went three-for-three on offense, including a walk and a stolen base. Miskey earned her fifth consecutive complete game while allowing one earned run and four hits to go along with six strikeouts and one walk. Her earned run average (ERA) was lowered to 1.44, the lowest mark in the conference thus far.

The third game was a disaster for the Spartans. In a battle between pitchers, first-year Kylie Hosey was outmatched by Washington’s Madison Denton. The two teams combined for only six baserunners in the first five innings before the Bears broke the spell. In the sixth frame, Washington scored two unearned runs. CWRU couldn’t respond in the seventh inning, dropping their third game of the season 2-0.

Miskey turned it around in the series finale, allowing just four hits and two walks while striking out six batters to lower her season ERA to 1.24. In the second inning, first-year outfielder Isabella Russo’s double scored Thomas. Russo then scored off a Bears error to cap off the Spartans’ scoring 2-0 in the inning. Thomas caught fire and hit a solo home run in the fourth frame to push the lead to 3-0. Riely scored in the sixth inning on a fielder’s choice by Yeung, and Gross scored following a single by Manworren in the seventh. Miskey closed the game with two strikeouts.

Miskey received her first UAA Pitcher of the Week honors for allowing just one run in 14 innings in her two starts against Washington. She struck out 12 batters and allowed a 0.157 batting average.

CWRU now stands at 13-8 overall and 5-2 in conference play. The Spartans will host a four-game series against Emory University from April 8-10. The series opener will be on Friday at 3 p.m. in Mather Park. The teams will play two games on Saturday, at noon and at 2 p.m. The series finale will be on Sunday at 11 a.m.