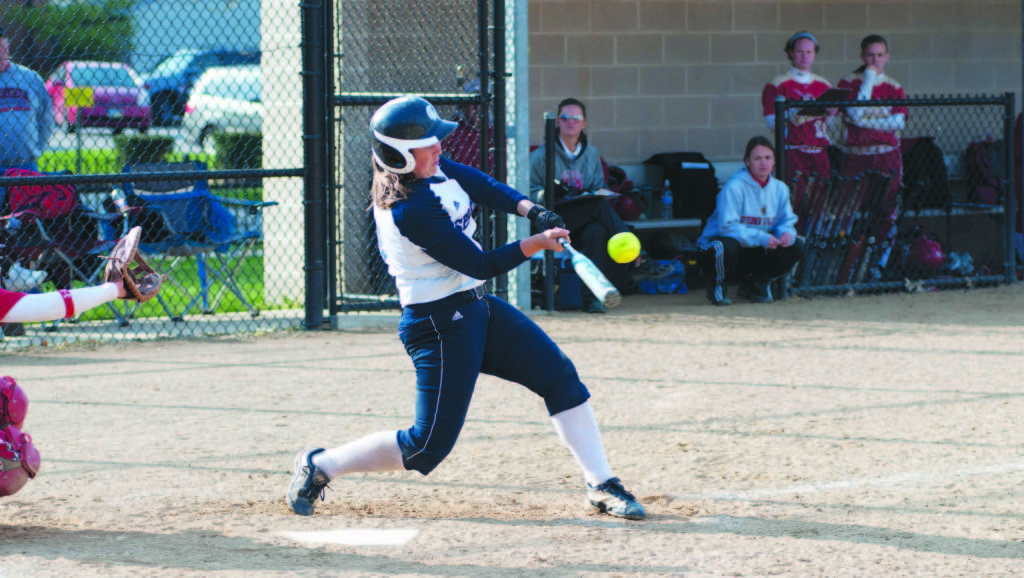 The Case Western Reserve University softball team split a doubleheader with Adrian College this past weekend as the squad celebrated the careers of its three senior student-athletes. The Spartans took the Bulldogs down late in the first game with a five-run sixth inning, 7-5, but the visitors’ batting proved too much in the nightcap and they won 11-2 in five innings.

The split moved Case to 21-14 overall, tying their fourth-best record in program history. The win also puts Case just one win away with eight games to play to ensure a winning season.

Before the game, the Spartans honored their seniors, third baseman Kaeleen Boden, first baseman Lauren Wolz, and catcher Ianna Wasser. The three veterans have seen the team improve immensely over their four-year terms, from a 9-33 record in 2010 and three winless conference seasons to one of the best seasons in program history.

The first game began quietly as Spartan Rebecca Taylor and Bulldog Kelly Eberhardt began a highly contested pitching duel. The game went scoreless after three innings until the visitors hit a solo home run with another run to go up 2-0. Taylor would escape with the bases loaded after a pair of sacrifice bunts.

The Spartans responded with a quick run when sophomore catcher Amy Taylor put down a bunt for a single down the first baseline, scoring Gena Roberts. The RBI single loaded the bases, but Case was unable to score again. The next inning saw the Spartans tie up the Bulldogs after Roberts drove in second baseman Molly O’Brien, who led off with a double.

Adrian turned up the pressure with two innings left. Tied 2-2, the Bulldogs took advantage of a walk and bunt for center Katrina Wotten to give Adrian the lead with an RBI single. With the lead and two runners on base, the Bulldogs sent in Leah Ostrowski to pinch hit. Ostrowski nailed a two-strike double to right field, scoring two runs and giving Adrian a 5-2 lead.

The bottom of the sixth came together for the Spartans; they started off strong, putting Boden and Taylor on first and second with no outs. After a fielder’s choice and a pop-out, things began to look bleaker as Boden and Taylor had both advanced but now had just one out to score. Nevertheless, it took just three batters to swing the game in the home team’s favor. After a walk by O’Brien, sophomore Mackenzie Lein had a two-run single to put the Spartans within one. Roberts, the team’s leading slugger, then knocked in her sixth home run of the year, a three-run shot to put the game out of reach and give the Spartans a 7-5 victory.

Taylor improved to 15-10 on the season and threw her 19th complete game. She is now three wins and one strikeout away from breaking program records for the season.

The second game of the afternoon didn’t go as planned; the Bulldogs and the Spartans traded runs in the opening inning. The Bulldogs posted two more wins on freshman pitcher Hillary Bunnelle in the second inning to give the visitors a 3-1 lead. In the fourth inning, Adrian broke open the game by virtue of an eight-run inning. The Spartans posted another run in the fifth inning but it wasn’t enough, and the Bulldogs claimed the 11-2 victory in five innings via the run rule.

The Spartans will head to Hiram College this weekend on Sunday, April 22 for a doubleheader. The Spartans will then round out the season with a four-game home stand, playing Waynesburg University on Wednesday, April 25 and Wittenberg University on Sunday, April 29. The final game of the regular season against Wittenberg will also mark the dedication of the new scoreboard at Mather Park and the announcement of a program endowment.