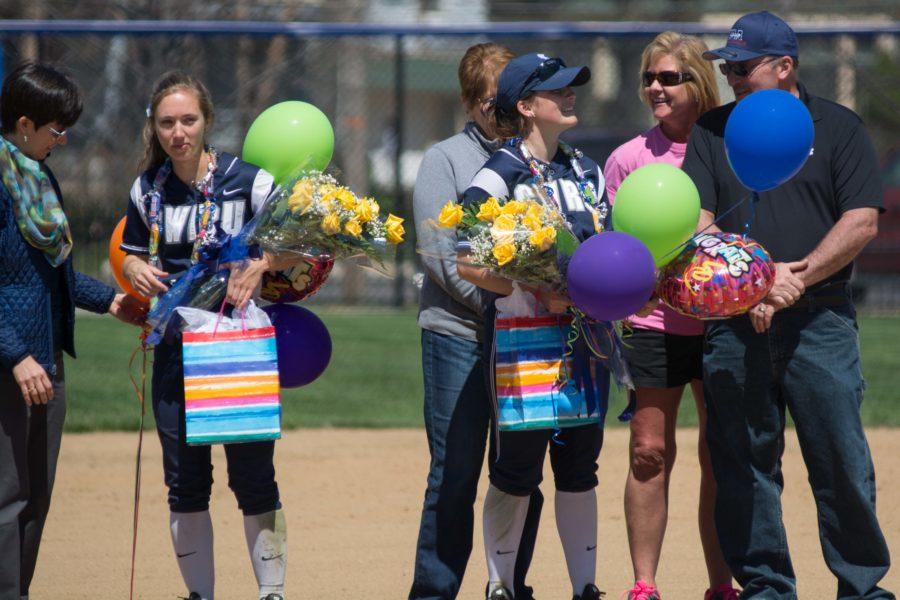 In the first matchup on Thursday, the Spartans won the first game 4-3 in nine innings of play. The game was back and forth for the first six innings before the scoring began. Second-year student Maren Waldner started in the bottom of the sixth inning with an RBI single. Third-year student Annie Wennerberg started for the Spartans and held the Blue Streaks in check until the top of the seventh when John Carroll scored three runs to take a 3-1 advantage.

After the Spartans were able to tie the game in the bottom of the frame, they suddenly found themselves in a tough spot, having the bases loaded with nobody out. Second-year Spartan pitcher Katie Dzierwa then entered the game and generated three outs without giving up any runs. The thrilling game ended thanks to a single by first-year student Nicole Doyle in the bottom of the ninth.

In the second matchup, the Spartans fell behind early in the contest, and despite repeated attempts to rally, fell to John Carroll 4-3.

In the second game of the doubleheader, the Spartans battled early on but ultimately could not stop the Ohio Wesleyan offense. The Battling Bishops scored five runs in both the first and fourth innings in the game. The Spartans found themselves down 5-1 after the first inning. After two Spartans scored thanks to an Ohio Wesleyan error, Wennerberg added an RBI single, putting the score at 5-4. The Battling Bishops would control the game from that point on, scoring seven unanswered runs to take a 12-4 lead and end the game in six innings.

On senior day, the Spartans split the series with Trine University, winning 4-1 in the first matchup only to lose 16-0 in the second game of the doubleheader. In game one, Wennerberg was her usual dominating self, pitching a complete game without allowing an earned run. On the offensive side, second-year student Grace Tritchler gave Wennerberg the run support she needed with a pair of doubles and two RBIs. A Trine player would not score until the sixth inning, and even then, Wennerberg was locked in and did not give other players the chance to score.

In the second game, the Spartan offense sputtered, registering only three total hits. Their defense wasn’t any better, committing three errors. After Trine scored 10 runs in the first and five in the second, this game was essentially over. The weekend was Senior Day for the Spartans as they honored Abbey Filliez, Kristen Klemmer, Meghann McMahon and Rebecca Molnar. When asked how much of an impact the seniors have had on this team, Head Coach Josie Henry said she has been “impressed by them and their dedication.”

When asked how the Spartans can finish strong on a solid season, Henry said, “We need to stop splitting series and make better adjustments for the second game.”

The Spartans did just that when they swept a doubleheader at Kenyon College on Wednesday, winning game one 10-0 in five innings and game two 10-2 in six innings.  The Spartans play Baldwin Wallace on Monday, April 25, the last day of classes.