Softball splits with No. 5 Trine 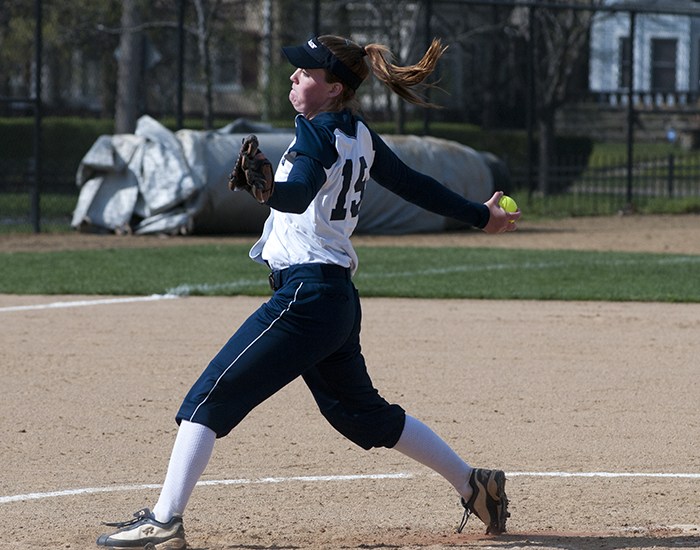 Sophomore pitcher Rebecca Taylor has been a force to be reckoned with on the mound for the Spartans. At 9-8 overall, Taylor leads the UAA in strikeouts with 91, nine more than the next pitcher.

Behind a strong pitching performance by sophomore Rebecca Taylor in the opener, the Case Western Reserve University softball team handed No. 5 nationally-ranked Trine University only its second loss of the season as part of a doubleheader split on Saturday at TU Softball Field. The Spartans won game one, 2-1, before the Thunder captured game two, 9-3.

The Spartans move to 9-10 overall and will return to Cleveland to open the home portion of the schedule this Monday, Apr. 1 versus Geneva College at 3:30 p.m. at Mather Park. The Thunder, ranked fifth by the National Fastpitch Coaches Association, sits at 16-2.

In game one, the Spartans wasted little time getting on the board when sophomore second baseman Molly O’Brien led off with a single, stole second, advanced to third on a wild pitch, and scored on a grounder by freshman first baseman Erin Dreger. Freshman third baseman Rachel Komar, who followed O’Brien with a walk and a steal, came around later in the inning on a grounder by sophomore rightfielder Gena Roberts.

Both starting pitchers shut out the opposition from there until the Thunder finally cracked the scoring column in the bottom of the sixth with a solo homer to left by Kaitlyn Clark. Undaunted, Taylor retired the next six batters in order to preserve the shutout.

In her ninth complete game of the season, Taylor surrendered just four hits and a walk while striking out two.

Trine starter Andi Gasco (7-2) held the Spartans to just two hits after the first inning but only struck out one in the loss.

In game two, another O’Brien lead-off single and an error set the table for junior catcher Amy Taylor, who knocked a two-run single through the left side of the infield. Trine got one in its half of the first via a Clark RBI single, but the Spartans countered with a single score in the second when O’Brien hit a sacrifice fly to plate freshman outfielder Kristen Klemmer.

However, the Thunder took over in the third with five runs on seven hits. Carly Searles got the ball rolling with an RBI triple and came home on a run-scoring single by Clark. Gasco then followed with a two-run homer to left center before Lauren Harris hit a solo shot down the left field line.

The hosts put the game away one inning later when Gasco hit a bases-loaded triple to make the score 9-3.

On the mound, freshman Rebecca Molnar started but only lasted 2.1 innings in the loss. Rebecca Taylor also struggled in an inning of relief, while freshman Marissa Kohley made her collegiate debut and retired the first five batters she faced in 2.2 scoreless innings.

Klemmer finished the game at 2-for-3 with a run scored, while O’Brien was 1-for-3 with her team-best 14 stolen bases. The second-year Spartan now has 30 steals in her career – just four shy of tying the school record.

At the plate for Trine, Gasco was 2-for-4 with five RBI. Justine Robles didn’t allow an earned run in four innings on the mound.

The Spartans headed back out on the road for a pair of games on Wednesday, Apr. 3 at Otterbein University. They lost 2-0 in the first game, the second game was ended too late for inclusion in this week’s edition.

Case will pray for good weather has they attempt to host their home opener for the fifth time. The Spartans will take on Big Red of Denison University. The game is scheduled to begin on Saturday at 1 p.m. at Mather Field. The second game of the twinbill is set to begin at 3 p.m.