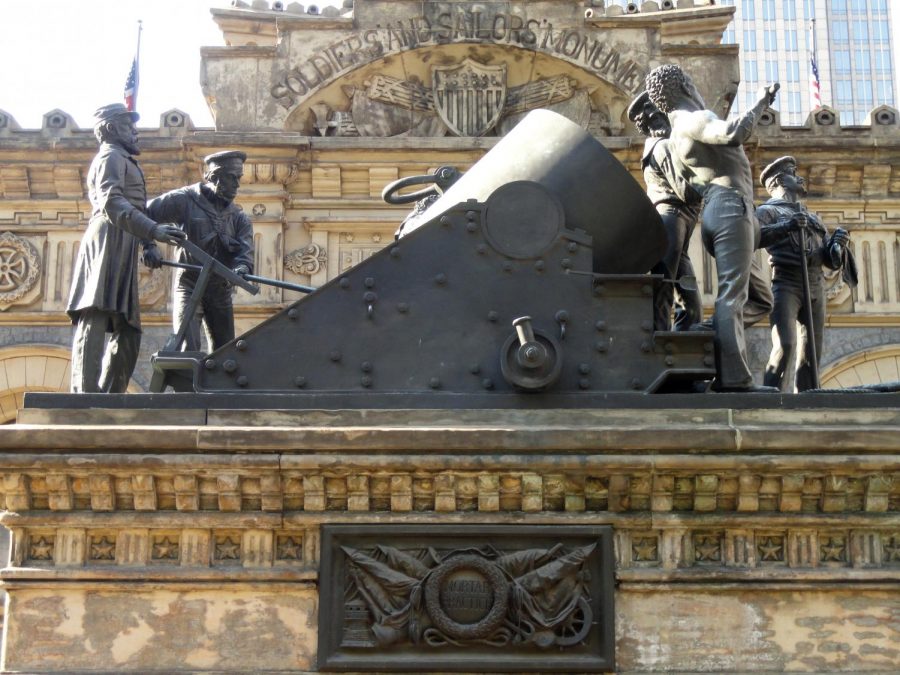 The Soldiers' and Sailors' monument in Downtown Cleveland

For one day only the public will be able to tour the tunnels underneath the Soldiers’ and Sailors’ Monument. This opportunity will take place on Saturday, April 23 and is only offered once a year.

The Soldiers’ and Sailors’ Monument was built in 1894 to commemorate the 9,000 Cuyahoga County soldiers who served in the American Civil War. Located below the monument, the tunnels are a labyrinth of passageways made of unfinished sandstone.

The tunnels are in the shape of concentric circles and are fully functional. They were built in the same architectural style as the catacombs of a European Cathedral.

While the tunnels serve as basement storage, their true purpose is to act as a support for the monument—which is made of 140 tons of black Quincy granite—and the outdoor sanctuary, the statues and the roof—which together weigh another 100 tons.

The monument includes a 125-foot shaft made out of black Quincy granite erected on a square base. Six carved bands divide the shaft, listing the names of 30 battles that soldiers from the area fought in. At the top of the shaft sits a bronze statue of the “Goddess of Liberty,” which represents loyalty to the United States.
The memorial building contains marble tablets listing the 9,000 Cuyahoga County soldiers. Also located in the building are four relief statues: Women’s Soldiers’ and Sailors’ Aid Society, Beginning of the War in Ohio, Emancipation of the Slaves and End of the War at City Point, VA.

Tours will go from 9 a.m. to 4 p.m. on Saturday, and everyone in line by 4 p.m. will have the chance to take the tour. Docents will be around to provide more information about the monument and tunnels.

The tours are free and do not require reservations, but tips and donations are accepted. They usually last about an hour.

The tours previously happened each October, but were moved up to spring to take advantage of the nicer weather. Last year saw around 1,500 people tour the tunnels.

Tim Daley, the Monument’s executive director told FreshWater Cleveland that visitors should anticipate a wait time; since only 30 people can go on each tour, some visitors last year waited up to an hour and a half.