Streaming recommendation of the week 12/04/20 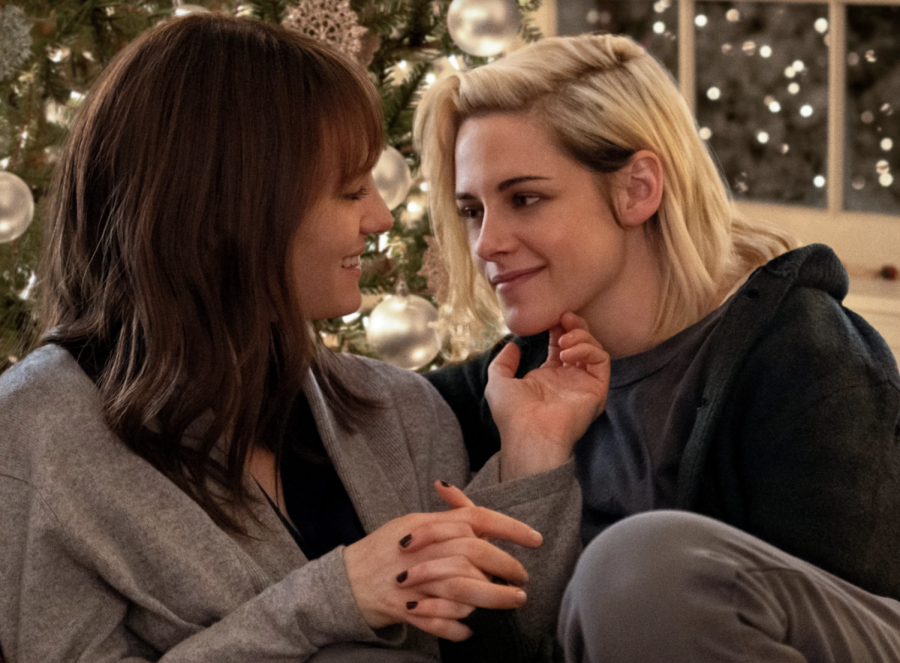 Mackenzie Davis and Kristen Stewart star as a lesbian couple in this groundbreaking Christmas rom-com.

Christmas is typically regarded as the happiest time of the year; however, this year that may be hard to imagine as we approach the worst weeks of the pandemic. That being said, Hulu’s new, original Christmas movie “Happiest Season” is delightful, but deceptively heavy.

“Happiest Season” was released on Nov. 25, and thankfully, does not require any annoying add-ons to watch. The basic premise is that Abby (Kristen Stewart) and her girlfriend Harper (Mackenzie Davis) go to Harper’s childhood home for the holidays. On the way, Harper drops the bomb to Abby: She has not come out to her family.

What might seem like a light, cheery Christmas comedy is really an emotionally-dense coming out story. Those looking for a light, queer fluff film will not find it in “Happiest Season,” for it’s a nuanced tale that has not been represented in queer media. The movie is an astronomical achievement in that sense alone; it’s a lesbian holiday movie that does not end in tragedy. As far as coming out stories go in mainstream media, “Happiest Season” tells one that feels authentic, showcasing how painful being in the closet is and depicting how familial expectations can hinder growth. It occasionally indulges in tiresome tropes—like an ex-boyfriend repeatedly showing up to family events—but spares viewers from the “dead lesbian” or “forbidden love” endings we have become exhausted by.

The genius of this film comes from Harper’s plight, despite the story being told from Abby’s point of view. She remains closeted to preserve her father’s image as he runs for mayor. Adding to her problems, Harper grew up in a household where perfection was demanded in exchange for praise and attention. This much is evident by her sisters, Jane and Sloane, who were cast aside for not living up to their parents’ expectations. Harper is the golden child of her family and has been conditioned to perform in a certain way to garner recognition and acknowledgement, undoubtedly as a coping mechanism. Coming out as a lesbian jeopardizes all of this, and as comedic relief, John (Dan Levy), Abby’s friend, tells Abby toward the end of the film, “Harper not coming out to her parents has nothing to do with you.”

While it is easy to categorize Harper’s actions throughout as selfish, they’re actually the opposite. She is bending over backwards to please her parents, putting herself in uncomfortable situations to uphold her parents’ image in an elite society, and because it is the only way she learned self-preservation growing up.

While these actions have explanations, they are not excusable. “Happiest Season” does not try to condone Harper—evident by Abby reaching her breaking point when Harper is outed but refuses to own up to it. She tells John that she wants to be with someone who is ready; it is not that her and Harper do not love each other, but Abby realizes that a relationship like this is not emotionally sustainable. The climax of this film, when Sloane (Alison Brie) outs Harper at their family Christmas Eve party is heartbreaking, with the brilliance of this movie shining through in the moment Harper denies her sexuality, and in effect, her love for Abby.

Director Clea DuVall does not take the easy route by having Harper own up to it and launch into some speech about being “gay and proud” or about the pain her family has caused her. Rather, she demonstrates how deep-rooted Harper’s fear of breaking the family’s perfect image is.

Nor does the responsibility to “fix” or support Harper fall on Abby. Even when Harper tells her family the truth in order to not lose Abby, Abby has already realized that she went through too much. It is not until Harper decides that, regardless of her family’s approval, she wants to be with Abby and goes above and beyond to make emotional amends that Abby eventually accepts her apology. It is a messy, layered story that accurately depicts how most people do not simply step out of the closet just once and how the decision to do so is both deeply personal, and highly complex each time.

I’d be remiss if I did not mention how funny the movie is for all its emotionally-loaded scenes. Levy is hilarious in just about every scene he is in. His character is similar enough to his former role David Rose—although wiser—that the movie is worth watching just to get your “Schitt’s Creek” fix. Aubrey Plaza offers her dry, sarcastic wit as Harper’s ex-girlfriend, Riley, and her story pulls heartstrings as well. Quirky, outcast sister Jane (Mary Holland) also adds humor throughout and brings another touching story to the mix. The movie does a good job overall of balancing Harper’s fear and Abby’s frustration with humor and levity.

Again, it is also remarkable to get a story like this told at all, with a lesbian director and largly queer cast. While queer cinema in general lacks stories that are not about coming out, “Happiest Season” does a remarkable job of telling a story not frequently told before with a happy, not overly cheesy, ending. There’s something to be said for seeing two women kiss onscreen multiple times and not have an overly sexualized relationship that is filtered through the male gaze. Stewart does an excellent job of carrying the emotional weight of a partner being forced back into the closet, and her discomfort is palpable throughout.

“Happiest Season” is a star on the burnt up, dead Christmas tree that has been 2020, and is worth a watch regardless of your sexuality. At the very least it will make you laugh, and at most it will make you consider the deeper intricacies of what it means to be closeted.