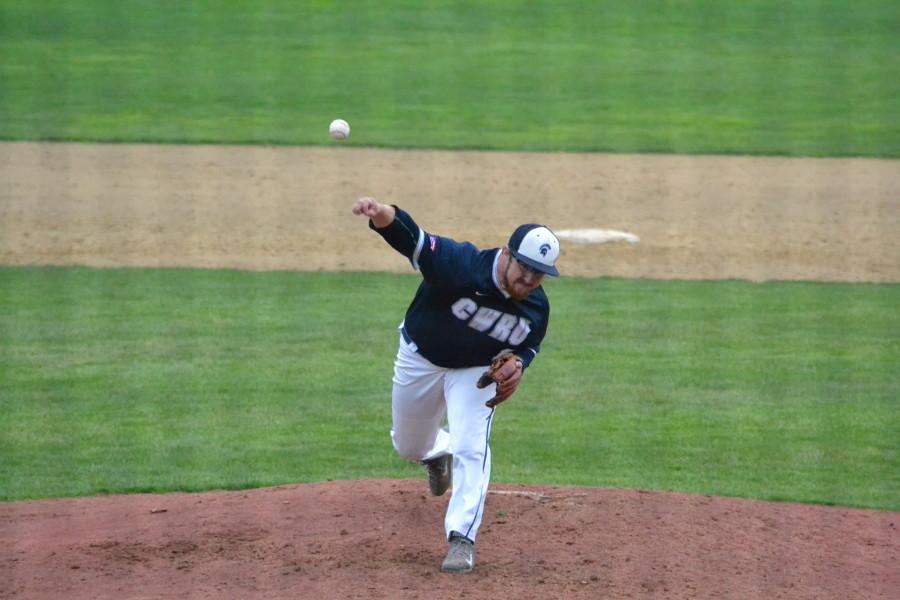 Nobby’s Ballpark played host to two baseball games on Saturday, April 2, including some baseball in the snow, but it did not hinder the home team from coming away victorious in both games of the doubleheader.

The Case Western Reserve University baseball team welcomed Denison University into Cleveland on Saturday and remained an undefeated 4-0 at home, winning the first game 7-5, followed by a dominating 11-2 victory. The first game featured some serious clutch hitting by the Spartans: All seven of their runs were scored with two outs in an inning. The Spartans were able to take a lead in the bottom of the seventh for good with a three-run inning, and fourth-year righthander Connor Tagg was able to pitch a scoreless final two and a third innings while striking out four to secure the win.

Tagg had some thoughts on the confidence that Head Coach Matthew Englander has in him, saying, “It’s great having a coach that has that much confidence in you. For me, it’s great knowing all I have to do is play my game and coach believes that will get the job done. I don’t need to do anything special and feel more comfortable when I go out in those situations.”

The second game saw the Spartans break it open in the bottom of the first with five runs, along with another five-run inning in the bottom half of the sixth, to lead to an 11-2 victory. Third-year righthander Jake Shields was able to pitch seven strong innings to get the win for the Spartans. Everyone contributed to the run scoring, with second-year infielder Alex Capetillo leading the way with three runs driven in, along with two by second-year student Daniel Watson, along with first-year students Tyler Wypiszenski and Mike Najmowicz.

The Spartans’ record following this game would improve to 14-9. Denison had been 9-3 entering the day, but CWRU handled them just fine. The Spartans again were dominant on the basepaths, and Watson had thoughts on this. “Baserunning is one of my favorite parts of the game and we have such an athletic team that it gives us a huge advantage, and one that doesn’t go in slumps,” he said.

Tagg was happy with all the performances of the day. He said,“I liked how aggressive we came out in all facets of the game. We didn’t give Denison extra opportunities to beat us and took advantage of their mistakes.”

As the season rolls on with a few games this week, Tagg gave thoughts on what comes next: “We stay sharp by continuing to practice with the same focus and intensity that we had at the beginning of the season.”

“Next for us is to stay focused and stick to what has gotten us this far. The biggest challenge in a season this long is bringing the same intensity and focus everyday,” added Watson.