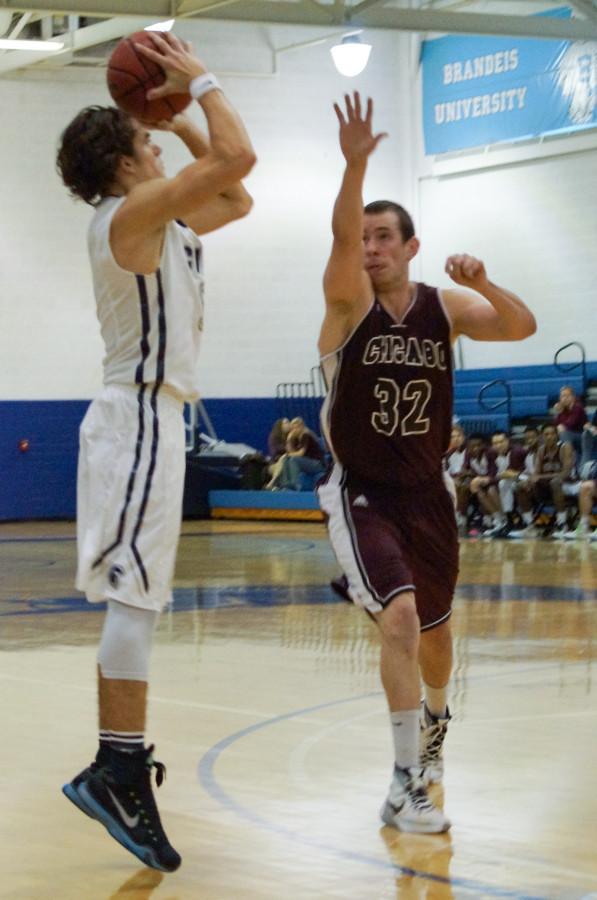 Spartan guard Javier Alvarez shoots over a University of Chicago defender, the Spartans return home and look to win the final three games of the season.

The Case Western Reserve University men’s basketball team dropped both games this weekend against Washington University and University of Chicago and fell to 10-12 on the season, including a 3-8 record in the University Athletic Association Conference. The Spartans have lost three straight and are now 2-8 in their last 10 games. “ Its definitely a deflating feeling knowing we played well, had a good chance to win and weren’t able to finish the job,” said fourth year student Jimmy Holman, “I think it’s important to take away some positives from those types of games; we had guys that stepped up and played really well in vital minutes and we had spots on offense when we were really clicking.”

In the first game against Washington, fourth-year student and guard Matt Clark scored 26 points, one away from his career high. In the first half, the Spartans found themselves down 10 points early on, trailing 187-8 with about 15 minutes left in the half. The Spartans battled back, continually wearing down the lead before going on an 11-1 run late in the half, taking a 47-45 lead at the half.

The game was tight throughout the second half, as the Spartans held a slim lead while the Bears continually chipped away. After building a 10-point lead, Washington pushed back again, trailing 81-80 with just over six minutes left. In a wild final minutes of the game, there were various big shots and lead changes.

Eventually the Bears would pull ahead and build the lead late to take the victory. Clark scored the final 11 points for the Spartans in the effort. The Bears closed the game on a 27-11 run to win 107-98. The Spartans let up 62 points in the second half of the contest. Head Coach Sean McDonnell, when asked about how his team can improve its defense, said, “We need to make sure that our opponents are held to one contested shot every possession that we don’t force a turnover.”

In the second game of the weekend, the Spartans had a difficult time scoring, putting up only 72 points in the effort. The Spartans shot only 38 percent for the game and were plagued by 20 turnovers. Jimmy Holman led the way for the Spartans with 18 points. Holman scored 13 points in a 20-point first half for the Spartans. The Maroons went up big, triggered by two key runs as they pushed their lead to 45-28 with 3:06 remaining. A small run by the Spartans cut the score 50-36 going into the half.

In the second half, the Spartans attempted to cut the lead, briefly getting their deficit down to single digits, 56-47, with 15:58 left to play. Chicago would respond, going on a 16-0 run over the next five minutes as the lead ballooned to a game-high 28 points as the Spartans went without a bucket for over six minutes. “We need to focus on playing a full 40 minute game and not allow teams to make late runs,” said Holman, “That’s killed us often this year.”

A late run by the Spartans helped close the lead by the game’s end with a final score of 89-72. McDonnell, when asked how to improve the team’s offense, said, “We need to push the ball at every opportunity and then confidently take the first great shot that presents itself.”

The Spartans come home to play two games against Rochester University and Emory University. The game against Rochester will be senior night. As the season draws to a close. “I’d love to win out,” said Holman “We have two of our last three at home, which is hugely important and I think the home crowd can help us gain some momentum going into our last one at Carnegie.”