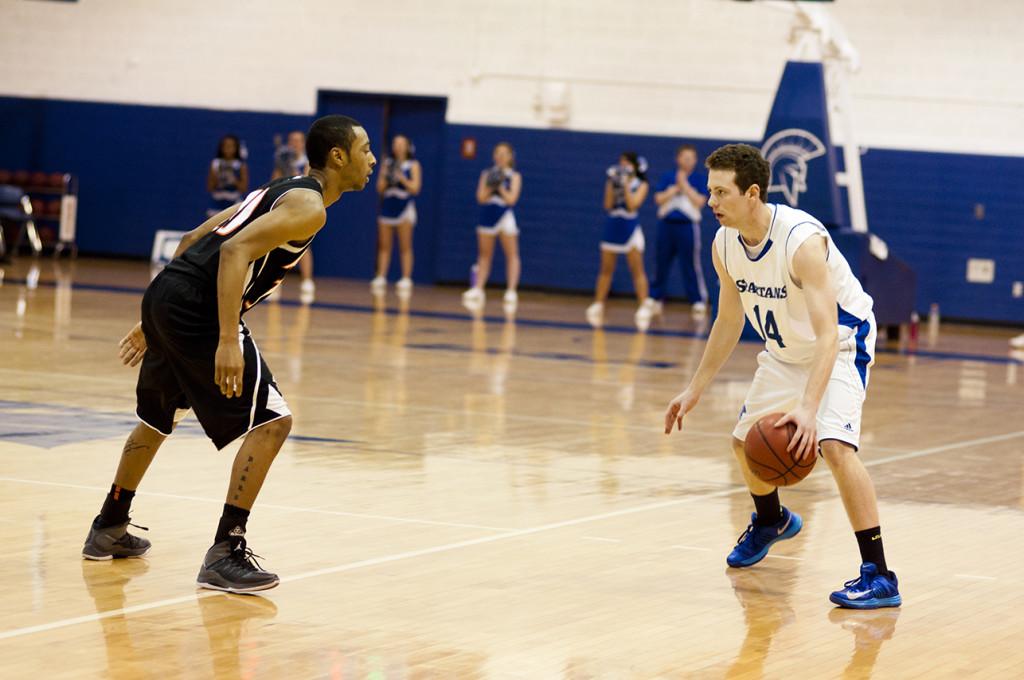 The men’s basketball team has started out of the gate with a 2-1 record the past week. After starting the season with two strong wins in the Stephanie Tubbs Jones Memorial Tournament, the Spartans dropped a high-scoring game against Baldwin Wallace to start the season. There is a lot of potential from the talented Spartans this season. “With so much talent, we have depth at all positions. We are confident in all of our reserve players,” said head coach Sean McDonnell, “Our bench will win us games this year.”

Friday night marked the kickoff of the 2013-2014 season and chants of “C-A-S-E! Case! Case! Case!” resounded through Horsburgh Gymnasium. The Spartans answered the call with a strong 70-64 victory over Anderson University (Ind.). David Thompson led the Spartans with a career high 22 points in a game-long battle with eight different lead changes and 10 ties. Four points was the largest separation either team was able to gain until the final four minutes.

In addition, early foul trouble limited both teams as the officials attempted to regulate the fierce and physical game. Thompson jump-started the Spartans’ season with an electrifying dunk on the first possession to go up 2-0. Anderson and Case traded leads until a 5-0 run by the Spartans put them up 16-12 at the 13:41 minute mark.

Anderson responded taking back the lead five minutes later when a driving layup gave the Ravens a 21-20 lead. The Spartans responded to the run but were unable to gain a foothold and Anderson closed the half with a single point 33-32 lead. The tough play was highlighted by multiple fouling first halves from players on both teams. “It was a good first game,” Thompson said, “We are prepared for a tough physical game, we practice that way.”

As the back-and-forth play continued in the second half, the Spartans turned to their bench for support.

A few key rebounds and baskets by Brian Klements off the bench and pivotal fast-break layup by Spencer Boyd led to a momentum swing in the Spartans’ favor. The layup gave the Spartans a two-point lead and the Ravens would never recover. Anderson was able to cut the lead to three multiple times in the following minutes but the Spartans didn’t back down. A clutch basket by Julien Person gave the Spartans a 66-60 lead with 35 seconds remaining on the clock, which forced Anderson to foul. A few extra points from the free throw line boosted Case to the win. The bench’s play was the stand-out factor, helping the Spartans to finish strong. “We can build and clean up on the defense going forward,” Klements said, “The guards did a great job getting me and David [Thompson] the ball inside, it was a team effort.”

Case followed its strong win with a thrilling overtime victory to win the Stephanie Tubbs Jones Memorial Tournament. Much like the night before for the Spartans, the two teams battled back and forth through the first half. The Spartans led twice by four, the last time occurring at 7:04 mark. The Lords led by as many as three, and finished the half up by the slim margin of 36-34. Case broke a 45-45 tie with a 7-0 run early in the second half that was capped by a three-pointer by senior guard Tim Chung. Kenyon answered with an 8-2 run and pulled within three, at 63-60. The Lords refused to go away and made the score 72-70 in favor of the Spartans with just over five minutes in regulation. On the very next possession, Person answered with a clutch three. Kenyon’s Ikenna Nwadibia made a layup in traffic with 5.8 seconds left to tie it at 80.

The teams headed into overtime and the Spartans took the lead when Thompson had a monstrous dunk with 3:54 left to play. Kenyon rebounded with three buckets in a row however and looked to have control but then wasted two at the free throw line. The Spartans took advantage of the missed free throws and came back with a three by Chung at 1:10 and a free throw from Person with 39 seconds to play. Person made a crucial lay to make it 90-89 with just 19 seconds left. Kenyon had their final look and their shot bounced off the rim. Person then grabbed the rebound and put away the Lords with two from the charity stripe ensuring the Spartans the win. The game plan didn’t change in overtime,” said McDonnell, “We needed to focus on stopping Kenyon’s top player, securing key rebounds and being efficient on offense.”

Hoping to capitalize on their previous wins, the Spartans headed across town to play Baldwin Wallace on Tuesday night. The game turned into a shootout that the Spartans would drop by a score of 88-75 for their first loss of the season. Strong shooting by Baldwin Wallace set the tone for the first half as they jumped out to a 17-9 led with just under 15 minutes left in the first half. The Spartans responded with a 10-0 run and would grab its only lead of the game off a fade-away from guard Tim Chung.

Baldwin Wallace answered quickly, however, and finished the half strong with a 41-34 led over Case Western. The hot shooting continued for Baldwin Wallace in the start of the first half, scoring 17 points in just over three minutes. With 16 minutes left the Yellow Jackets had a 58-42 lead. The Spartans were not finished as they battled back to within seven. It wasn’t enough, as Baldwin Wallace turned up the defense and kept the Spartans from getting within 10 points for the rest of the game. “Our team defense needs to keep improving,” McDonnell said, “Our opponents shot too efficiently, and we want to be more difficult to play against than that.”

The Spartans played on Thursday night at Muskingum, which occurred after this issue was sent to printers. A game recap is available online. Case will play next on Tuesday at home against Denison.