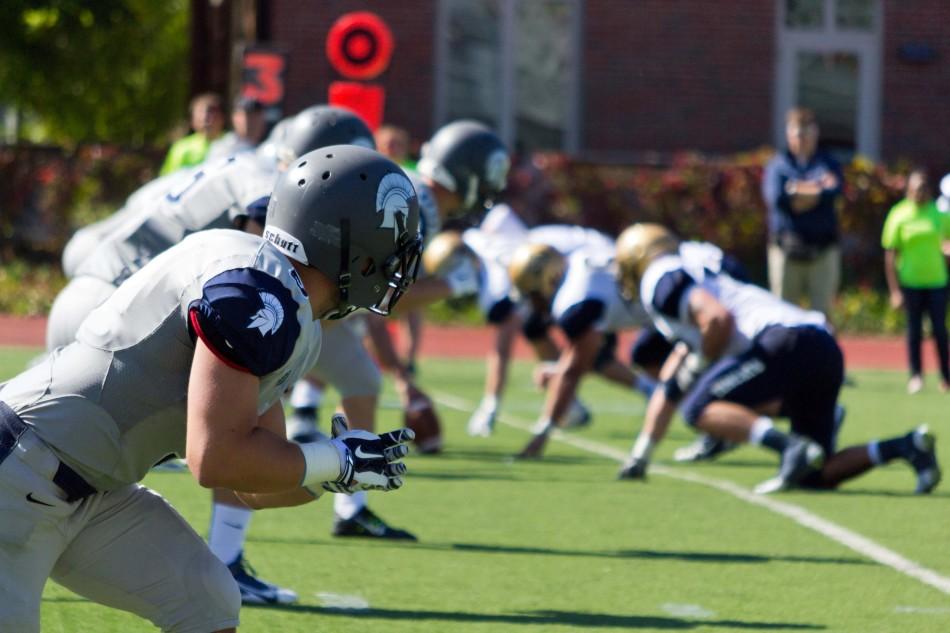 The return to their home turf was a challenge for the Spartans as the Case Western football team beat the Thiel Tomcats at DiSanto Field Saturday afternoon.

The Spartans captured that elusive 200th win in program history by a score of 23-16. We at The Observer expected a 28-21 final and though we were slightly off, we had the correct margin between the two teams and are going to chalk that up as a victory, putting us at 1-2 on the season with the Spartans standing at 2-1.

As expected, the Tomcat’s starting quarterback Ryan Radke’s ability to run for big gains when flushed out of the pocket hurt the Spartans, as Radke led any rusher on either team with 61 yards on the day.

It wasn’t enough, however, as the Spartans were led by quarterback Billy Beecher who threw for 174 yards on the day. His top target, freshman wide receiver Luke DiFrancesco caught four passes for 75 yards and a touchdown, earning him the honor of UAA offensive player of the week.

However, the two teams struggled to get going offensively, especially in the first half, and both teams had poor third down conversion rates, the Spartans converting three of their 16 attempts and the Tomcats managing only two of their 17 attempts. The two teams were sloppy at times, with penalties and turnovers leaving the game wide open for most of the game.

The Spartans started the game receiving the kickoff and then marched downfield for a strong drive before being forced to punt it away. That first drive was really the only drive of substance the entire first quarter as the two teams spent the rest of the 15 minutes unable to string together a drive and resorted to punting the ball back and forth.

This routine was ended less than a minute into the second quarter when the Spartans fumbled at their own 10-yard line, allowing the Tomcats to recover and to run the ball into the end zone for the first points for either team. The Spartans responded with a big return off the restart and found themselves at midfield when Beecher broke through for what would have been a 56-yard touchdown run, but it was called back due to a false start on the Spartans.

The Spartans managed to score the next 16 points however, off a 37-yard field goal off the foot of kicker Nick Bavaro, and with 3:59 left in the first half to make the score 3-7 at halftime. This was followed by a 35-yard touchdown run by Adam Hochman for the only score of the third at the 8:59 minute mark.

Then in the fourth quarter the Spartans went up 16 to 7 when Zech Medved scored off a 12-yard pass from Beecher. The touchdown was set up by the play of the game, an interception by the Spartans’ Jordan Esteban, which he returned 72 yards before being pulled down by the Tomcats.

The game wasn’t over however, as the Tomcats rallied to tie the game off a touchdown at the 9:58 mark of the fourth quarter and a field goal with just 2:54 left in the game to make it 16-16.
The Spartans responded with a four play 62-yard drive, capped by Beecher’s 23-yard touchdown toss to DiFrancesco, giving the Spartans the 23-16 victory.

The Spartans stay at home this week and will face off against PAC conference leader Bethany College, who stand at 3-1 on the season but are 2-0 in conference.

The Spartans will be challenged by the Bison’s quarterback, sophomore Brian Vales. Vales is 83 of 115 this season for 753 yards. This will be a challenge for the Spartan secondary, who were exposed in the Case Western loss to St. Vincent two weeks ago. Furthermore, like Thiel’s Radke, Vales has the ability to run with 226 yards and three touchdowns of his own. This versatility will pressure the Spartans and could be their Achilles heel this week.

With this in mind, The Observer predicts our mighty Spartans to fall to Bethany in a close 24-21 final. Here is to hoping we are wrong! The game begins Saturday at 6:00 p.m. at DiSanto Field.