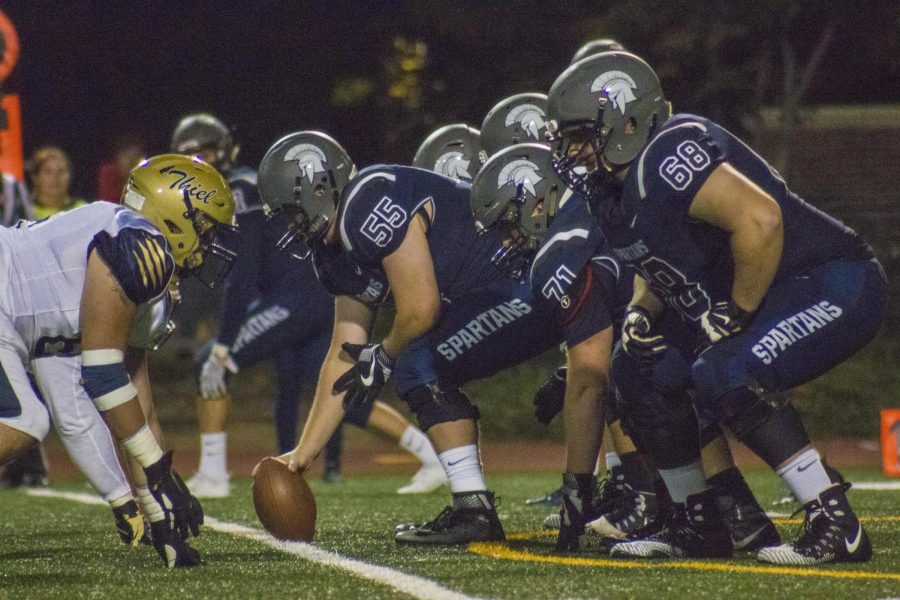 This win put the team at 3-0 for the season and kept them in the No. 18 spot in the Division III overall rankings, according to d3football.com.

By the end of the first quarter, the Spartans led by a score of 21-0. First-year quarterback Drew Saxton threw to Luke DiFrancesco, a graduate student wide receiver, for two touchdowns in the quarter. Third-year running back Sam Jenkins racked up the other touchdown with a one-yard run.

First-year defensive back Colin Schuster had four solo tackles and the only interception of the game. Schuster’s interception in the beginning of the second quarter gave the Spartans control of the ball, and the team quickly took advantage of the opportunity to score.

Saxton threw for another touchdown in the second quarter, this time to second-year wide receiver Colt Morgan. Morgan’s score increased the Spartans’ lead to 28, with the Tomcats trailing behind at zero.

Fourth-year wide receiver Joey Spitalli caught Saxton’s fourth touchdown of the night, bringing the Spartans up to 35. Thiel scored with one second on the clock, bringing the score to 35-7 going into halftime.

Second-year running back Zach Hall put the Spartans further in the lead, up to 42-7, with a touchdown in the middle of the third quarter.

On the CWRU side, DiFancesco scored again with another pass from Saxton, putting the final score for the third quarter at 49-13.

In the fourth quarter, first-year running back Nate Stefonsky scored his first and second collegiate touchdowns. Stefonsky rushed a total of 61 yards and put the Spartan score at 63 to end the game.

The Spartans played hard all around, making several notable plays throughout the game and racking up point after point.  The CWRU defensive line made seven sacks, an impressive outing even for such a talented group.

“The band’s faces were so tired by the end of the game. The team scored so many touchdowns that we played the fight song like, a billion times,” said Jess Dickson, a third-year saxophone player in the Spartan Marching Band.

The Spartans have successfully defended their Presidents’ Athletic Conference (PAC) Champion status, but the team isn’t getting cocky.

“It feels good to be 3-0 right now, but it also adds weight and responsibility, because we have a target on our back as we play some very good teams these next few weeks,” Morgan said.

As the team prepares for the rest of the season, Morgan shared some of his tips for keeping his head in the game and shaking off mistakes on the field.

“One of the most important things to keep in mind while on the field is why you are playing the game,” he said. “I will also mentally imagine myself making plays in the game to build my confidence and prepare my mind for split second decisions I might be forced to make.”

The undefeated Spartans face off against Westminster College, in New Wilmington, Pennsylvania on Saturday, Sept. 29. Westminster’s PAC record is also undefeated, with a 3-0 mark so far this season.