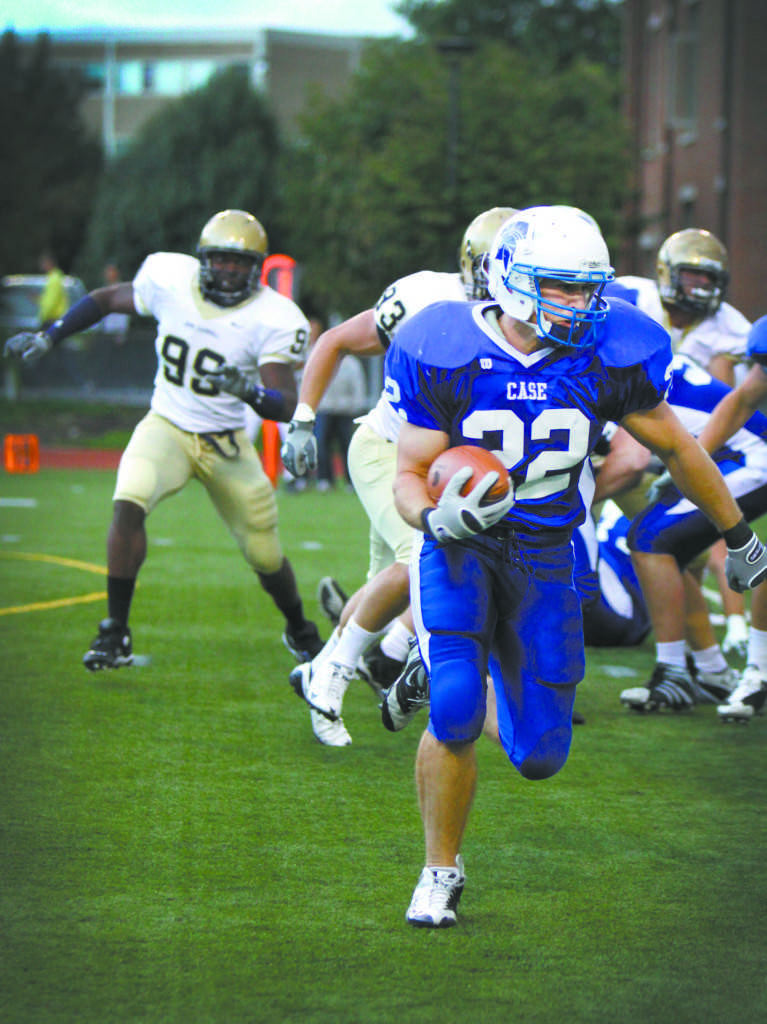 Case Western Reserve University kicked off their season with a 30-13 win against John Carroll University. Playing in front their home crowd, the Spartans wasted no time as senior running back, Billy Deitmen scored the first touchdown with his eight-yard run after a four-play, 41-yard drive. CWRU would later force JCU to punt the ball away and a minute later, Senior quarterback Joey Baum led a three-play, 64-yard drive that resulted in a 28-yard touchdown pass to senior wide receiver, Shaun Nicely. Senior kicker, Sam Coffey would complete the drive with his extra-point attempt. The Spartans ended the first quarter leading the Blue Streak 14-0.

The Spartans added to its their when Sam Coffey delivered a 30-yard field goal, with 4:58 left in the 2nd, to push the lead to 17 – 0. JCU got on board thanks to Teree Harriss’ two-yard run to cap off a seven-play, 59-yard drive and cutting CWRU’s lead to 17 – 7. The Blue Streak would go on to hold CWRU scoreless for the rest of the first half. At half time, CWRU had the total of 241 yards of offense while JCU had only 134.

The Spartans would continue its offensive threat when quarterback Joey Baum found junior tight end Bryce Coleman for a six-yard touchdown pass. This was Baum’s second touchdown pass of the night. Kicker Sam Coffey wasn’t able to complete the extra point attempt as JCU defense blocked the kick. This CWRU drive covered 75 yards in eight-plays which included an amazing 44-yard reception by senior wide out Zach Homyk. JCU would be unable to put up any threats as CWRU defense kept the score at 23 – 7 at the end of three quarters.

The Blue Streak opened up the fourth with 29-yard drive until CWRU senior defensive back Zack Hass intercepted JCU quarterback Michael Locke’s pass. JCU would recover the ball after CWRU’s punt and began a seven-play, 66 –yard drive that ended with a 14-yard run to the end zone by Michael Locke. The Blue Streak would try their hands on a two-point conversion but to no avail. The final scoring drive of the night came when sophomore running back Trevor LeBarge rushed for a three-yard touchdown run. Coffey would cap the evening with the extra point attempt. The final score of the match was CWRU 30 and JCU 13.

On the offensive side, CWRU quarterback Baum completed 9-of-13 passes as he racked up 133 yards and 2 touchdowns. Wide out Homyk led all receivers with six receptions and 91 yards. On the defensive side, junior linebacker Jacob Adams collected twelve tackles on the evening.

CWRU will travel to New York to take on conference rival University of Rochester at the Fauver Stadium on Saturday, September 11th and look to make an early statement in UAA. The Spartans won’t play at home until September 25th when they host the Denison University Big Red.