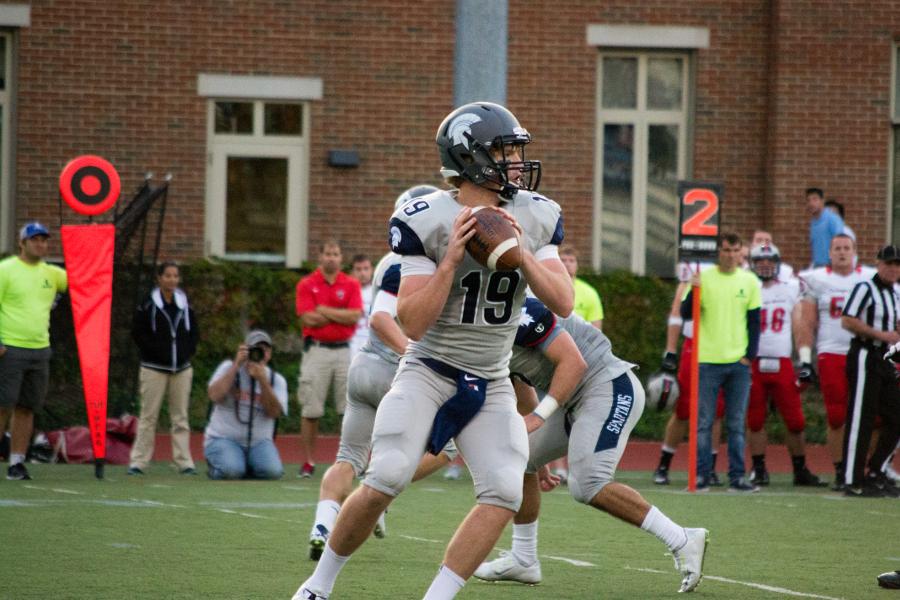 The Spartans football team stands at 1-1 after the disappointing loss to PAC rival
St. Vincent College.

The Observer sports team stands at 0-2 in picking the scores. The Spartans defense struggled to hold onto the 10-point lead that Case held midway through the third quarter over the Bearcats. The Bearcats clawed their way back to snap a 23-game losing streak, the program’s first win since November 2011.

The loss also broke the Spartan’s streaks of not losing following the bye week and winning in the state of Pennsylvania since both of which had held since the 2006 campaign.

Offensively Beecher threw for 22-of-35 for 183 yards and two touchdowns. In addition to the second half connection with Darany, Beecher hit fullback Adam Hochman at the 7:37 mark of the second quarter to put the Spartans on the board. Hochman had his second career two-touchdown game as he also ran in a score just over four minutes later at the 3:24 mark.

Looking ahead to tomorrow’s game the Spartans will look to rebound from the loss. The Spartans have not faced their opponent Thiel since 1983 when the Spartans left the PAC for the UAA. The Tomcats are 1-2 this season but have averaged 26.3 points on 161.0 yards rushing and 150.7 yards passing for 311.7 total yards per game. The Spartans should be most worried about Thiel’s starting quarterback, Ryan Radke. The sophomore has completed 48 of 85 passes for 448 yards and five touchdowns. However, Radke can also hurt teams on the ground as he has rushed 39 times for 227 yards. His ability to scramble out of the pocket for strong gains might be a challenge for the Spartans. If the Spartans turn to focus on the aerial attack, they risk being burned on the run by Radke.

However, the Tomcats have struggled on defense giving up an average of 41 points a game. Should the Spartans be able to exploit this weakness and use the home crowd energy to keep the offense going, there is hope for the Spartans.

The Spartans are historically good at DiSanto Field and will be looking to redeem themselves after the loss to St. Vincent. With this in mind, the Spartans will need look to an improvement in their passing defense, as well as a better offensive game which struggled down the stretch in order to capture the 200th win in Spartan history.

Being cautiously optimistic, we at The Observer are predicting a 28-21 victory. Be sure to come out to DiSanto Field and root for the Spartans at 1 p.m. Saturday afternoon.