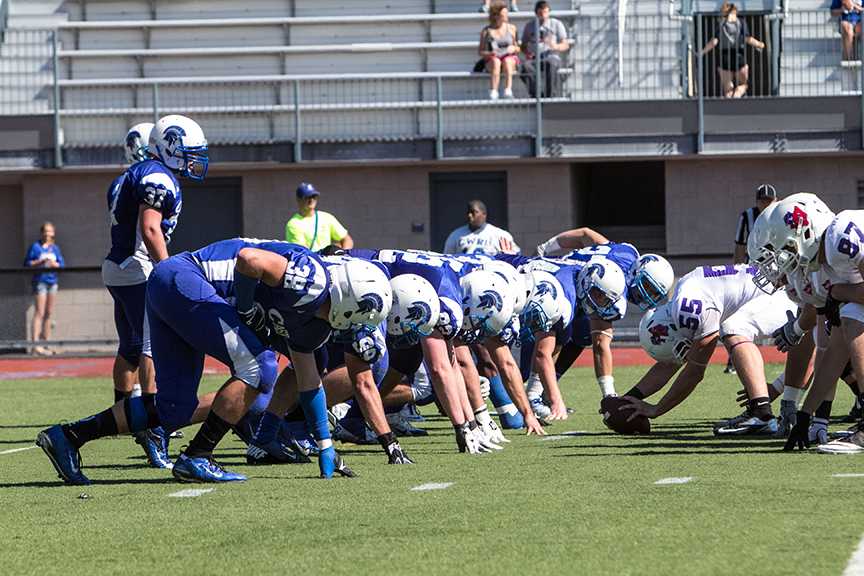 The Spartans get to the line during game versus Linfield.

The Case Western football team returned to .500 with a strong win on Saturday over Trinity University (Texas). The win continues to build momentum for the teams as they prepare for UAA play.

Decimated by injuries early in the season, the Spartans looked to be in great form against Trinity. A very good team on both sides of the ball, Trinity provided a challenge for the Spartans. However, the two-week bye allowed for healing and work with some of the younger players by the coaching staff. “We were as healthy as we have been,” said head coach Greg Debeljak, “After having eight starters out at one point it was great to have two bye weeks to heal.”

The healing and work showed as the Spartans beat Trinity by a score of 21-17 on Saturday. It was the first time Case has ever played Trinity and Debeljak’s 100th game as head coach for the Spartans. Led by running back Kenny Riordan’s 96 rushing yards and two touchdowns, the Spartans appeared healthy and ready to win. Riordan had 15 carries and quarterback Erik Olson completed 16 out of 21 passes. Of Olson’s 143 yards, 56 went to wide receiver Sean Lapcevic.

The Spartans scored first off of an 80-yard drive that was capped by a three yard touchdown pass from Olson to fullback Adam Hochman with 45 seconds left in the first quarter. Trinity responded early in the second quarter tying the game with a 23-yard touchdown pass with 13:08 left to play in the half. The Tigers struck again with a 24-yard field goal to end the first half after multiple possession changes including a crucial interception by Spartan cornerback Mike O’Donnell to stop a strong Trinity drive.

The opening drive of the second half resulted in Riordan’s first touchdown, a 35-yard run. The ensuing extra point gave the Spartans a slim 14-10 lead with 11:28 left in the third quarter. Trinity answered on the following drive however on a trick play when the Tigers looked to be going for a field goal and instead took the snap, rolled out, and floated a pass into the endzone. The Spartans weren’t finished, however, as Riordan pounced on a fumble in the endzone to give Case Western back the lead. Safety Austin Webb helped shut down Trinity when he intercepted a pass at the Spartan 25, which he returned 32 yards ensuring a Case Western victory.

Kenny Riordan’s efforts lead to him being named UAA player of the week.

Being named player of the week is a big honor for a player who came into this season off a season-ending injury last year. The Spartans will look to him to lead them into UAA success beginning on Saturday. The team looks to win the conference championship, a goal still in reach. Should the Spartans win the three remaining games against University of Chicago, Washington University and Carnegie Mellon, Case would win their fifth UAA title in seven years. “[A championship] is special to the guys,” Debeljak said, “We can still obtain it. They will be low scoring clashes and will come down to a couple key plays. We can’t have any mistakes.”

The Spartans play at home for the final time in 2013 on Seniors’ Day versus the University of Chicago next Saturday, Nov. 2 at 1:00 p.m. at DiSanto Field.