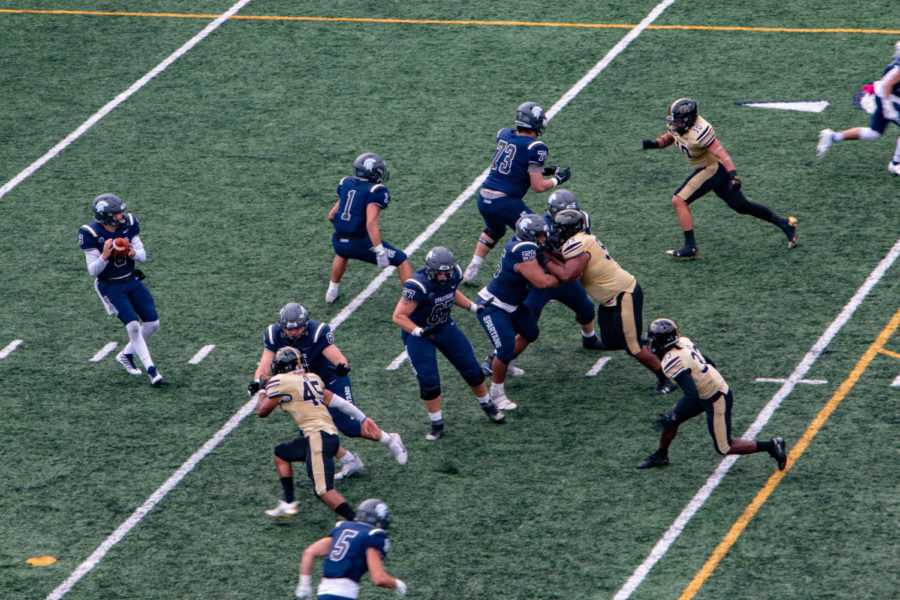 Tensions were high in the bleachers of Case Western Reserve University’s DiSanto Field as the Spartans hosted Geneva College in the 2021 Homecoming Game.The Spartans were down three points when the offense took the field. In a splash of 46 seconds, they capped off a 91-yard touchdown drive that ended with a 9-yard pass to third-year wide receiver Lucas DeCaro.The Spartans are now 4-3 on the season, thanks to two straight wins. Geneva fell to 2-5.

From a reported fight between a Geneva dad and a CWRU dad, it was clear that this was no ordinary football game. The game went as back and forth as one could expect. Even though the Spartans’ offense came out staggering, they managed to get on the board in the first quarter thanks to a blocked punt from second-year defensive back Marco Toth, who blocked it into Geneva territory and returned it all the way to the endzone for a 41-yard touchdown. A successful kick attempt from second-year kicker Jacob Lurie put CWRU up 7-0.

That seemed to provide the spark to get the offense going. In the final drive of the first half, the Spartans were in dangerous territory, down 21-7 after Geneva punched in three touchdowns. Things appeared to be dire as the Spartan offense began at their own 3-yard line when fourth-year quarterback Drew Saxton threw a dart to fourth-year wide receiver Colt Morgan for 13 yards and a fresh set of downs. Their connection fueled the rest of the offense on that drive, which culminated with Saxton and Morgan totaling 86 yards and scoring a touchdown.

Geneva held a 7-point lead at halftime thanks to the rough start on offense, but the Spartans were able to double dip as they got the first possession in the second half. It resulted in a game-tying touchdown from Saxton to first-year player Noah Coyne.

Special teams’ player of the day Toth made his impact felt again as he forced a fumble on the kickoff, making it the Spartans’ ball yet again. The ball was recovered by second-year linebacker Ryan Cabrera deep in Geneva territory. Just seven plays later, CWRU took its first lead of the game with another touchdown from Saxton: this time, he ran it in.

With CWRU up 28-21, it seemed to be a quick affair in trading leads. Geneva was able to even the score out with a crowd-silencing 60-yard touchdown pass to Jared Ozias in the third quarter. They regained their lead with another deep touchdown pass, this one of 47 yards, to Blake Peet.

When it seemed like all momentum had shifted away from the Spartans, the offense picked up the tempo and strung together an impressive five-play drive that took just 1:59 off the clock. They evened the score at 35-35 with a pass from Saxton to DeCaro.

The crowd was teeming with excitement with the game tied yet again, but the Spartan defense struggled to get off of the field. Geneva’s offense pieced together a slow-paced drive that took almost seven minutes off of the clock.

But, as they say, bend but don’t break. When Geneva was in the red zone, CWRU was able to get enough stops to force a field goal. With 1:10 left, Geneva’s lead stood at just 38-35. With the ball back in the Spartan offense’s hand for the final drive of the night, the rest was history.

And history was made on Saturday afternoon. Saxton’s tremendous game, in which he totalled five touchdowns and 393 yards, moved him up to second-most touchdowns in the school’s history, just ahead of Rob Cuda.

He wasn’t the only one who made history; wide receiver Morgan had 12 receptions for 151 yards and a touchdown. His 12 receptions catapulted him to becoming the program’s all-time leader with 216 career receptions.

The Spartans will have to put this thrilling and historical homecoming weekend behind them as they prepare to face Thiel College on the road on Saturday, Oct. 30 at 1 p.m.