Spartan football on the brink 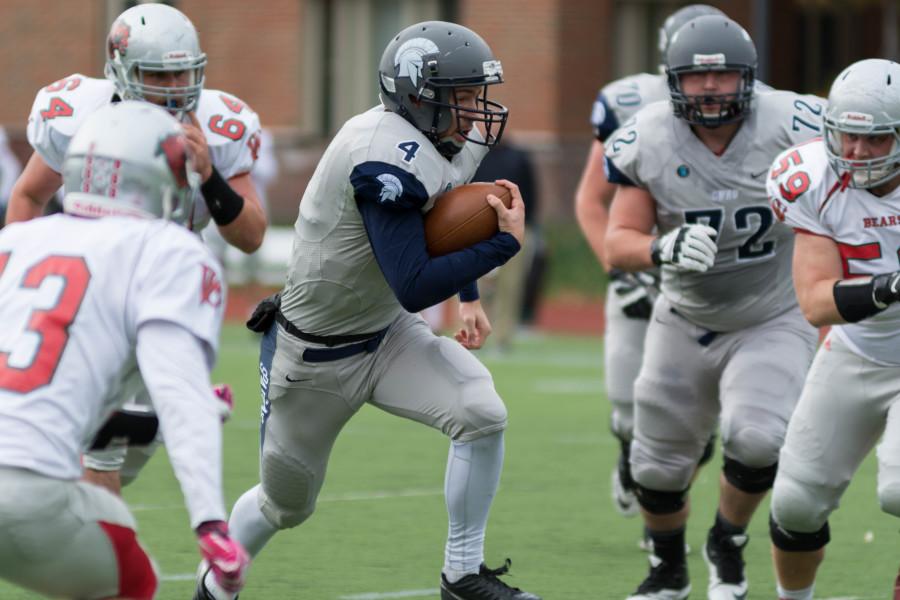 The Spartans are facing the apex of their season tomorrow. The time has come for the team to prove what they are made of and show that they belong amongst the football elite. The Spartans rose to be ranked number 18 in the national poll this week and despite the ranking the team will step onto the field in a strange position. For the first time this season the CWRU football team will take the field as true underdogs.

The Spartans will be taking on the Thomas More College Saints, the only undefeated team in the President’s Athletic Association (PAC) and tied with the Spartans atop the PAC standings. This means that this week’s game is of utmost importance to Case Western Reserve University. For the first time since 2009 the Spartans have the chance of making the NCAA DIII playoffs, off the automatic bid which the PAC winner earns and whichever team wins this weekend firmly places themselves in the position to make the playoffs.

The matchup has another layer of importance as the head coach for the Saints is Regis Scafe, a CWRU alumnus. Scafe, a 1971 graduate, returned to CWRU to coach from 1994-1999 and then coached for 14 years at John Carroll University before taking the Thomas More position this offseason. This homecoming for Scafe simply adds another level of intrigue.

While it is stressed on a regular basis, this week more than ever the Spartans must play at their highest level on both sides of the ball.

Second-year student Rob Cuda is the Spartans’ starting quarterback and has expertly led the team’s offensive production this season. He leads the team both on the ground and in the air, throwing for 2,043 yards and 25 touchdowns while rushing for 606 yards and five touchdowns. His biggest targets are Bryan Erb who is tied atop the PAC for touchdown receptions with 11 and have 601 receiving yards.

The ground attack is centered around Anthony Canganelli who has five touchdown trips. He is accompanied by fourth-year student Adam Hochman who has rushed for 250 yards of his own.

Two Spartans have posted 41 tackles apiece to lead the team, second-year student Cody Calhoun and third year student Nick Kwon. Calhoun and Kwon led the Spartan defense to their shutout play, and Kwon in particular has three interceptions for the Spartans.

The Saint’s threat is varied and potent. At quarterback Thomas More has not one but two weapons in both Brenan Kuntz and Jensen Gebhardt. Kuntz has been the go-to guy as of recent and is likely to get the start on Saturday. He has a completion rate of 67.3 percent, thrown for 15 touchdowns and 1,361 yards. Gebhardt has posted similar numbers with 15 touchdown passes of his own on 1,384 yards. However both can be mistake prone and have thrown nine interceptions between the two of them, compared to only one on the season for Cuda. This could be an area of weakness for the Spartan defense to exploit.

On the ground the Spartans will have to control Thomas More running back CT Tarrant who has run for 935 yards and 11 touchdowns. The aerial defense will be focused on Goose Cohorn who is second at the DIII level with 1,079 yards and is tied with the Spartans Erb for 11 touchdown receptions atop the PAC.

The Thomas More defense will be the toughest the Spartans have faced this year as they boast three 40 tackle players. They also boast two players with four interceptions apiece, showing that they will make opposing offenses pay for their mistakes.

Unfortunately the Spartans will have to rely on their intangibles for this game. The number disparity shows a strong Saint’s advantage heading into the contest. According to our prediction machine the Spartans are slated to lose by 10 points 38-28.

This means that while the game could come down to one or two possessions, the Spartans have no room for error. This game may depend on motivation, crowd support, home field advantage and momentum. Raw talent may not be enough. The Observer predicts a 35-28 final score and the Spartans’ second loss but by all means hope that this is the week that we are wrong.

The action kicks off at DiSanto Field on Nov. 7 at 1 p.m.