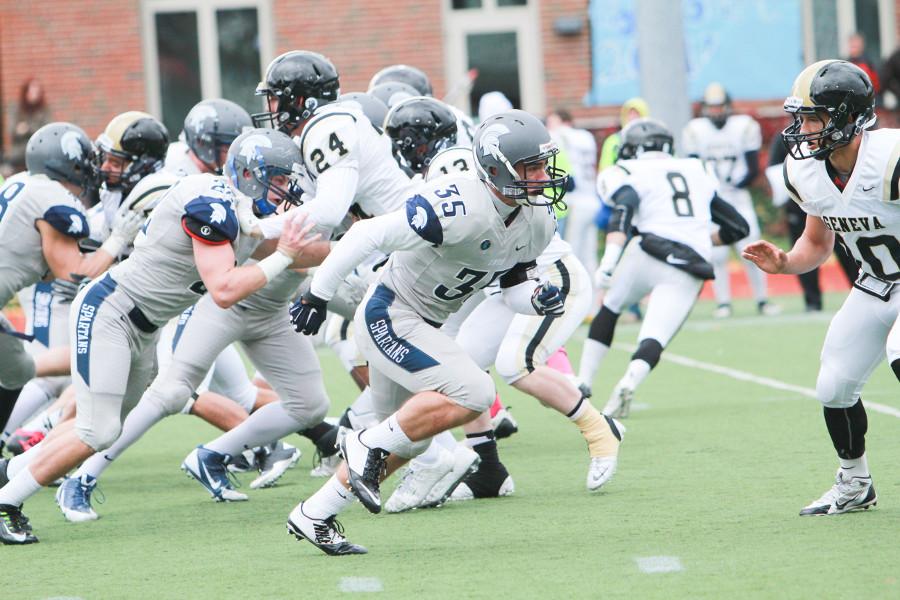 The Spartans will look to win their fourth straight as they return to DiSanto Field for Homecoming on Saturday.

The Spartans don’t seem to know the meaning of the word moderation.

The Case Western Reserve University football squad has pounced on their competition since their one point loss to University Athletic Association rival the University of Chicago to start the season, to outscore their opponents 149-40. The Spartans’ high powered offense exploded in the second quarter last weekend against President Athletic Conference (PAC) rival Bethany College Bison.

The Spartans saw themselves down 14-7 as the first quarter expired against the Bison but then exploded for a 28-point second quarter, tying the Spartan record for most points in a single quarter. Those 28 points were the first on their way to 45 unanswered points before the Bison were able to work their way back onto the scoreboard.

The Spartans have excelled offensively with three straight 40-point games for the longest such streak since the 2009 season. Their 59 points this week was the fourth highest total even posted in a single game in the Spartans history and shows the CWRU squad’s dominance on the offensive side of the ball. The leader of this charge is starting quarterback second-year student Rob Cuda.

Cuda has led the team in both passing and rushing, as his style of play is to scramble out of the pocket in an increasingly common style of running quarterback. Cuda has a completion rate of 63 percent and has posted 1,035 yards in the air. He also has 13 touchdown passes and 383 on the ground, carrying the ball into the end zone on his own twice this season.

The defense has played lights out as well led by fourth-year safety Scott Suren who has 15 tackles, and two turnovers (a fumble recovery and an interception) this year. Suren was named PAC Defensive Athlete of the week for his performance against Bethany.

This week the Spartans will look to continue their dominance at home against the Waynesburg University Yellow Jackets. The Yellow Jackets have posted 25.8 points per game but have found themselves on the wrong side of a few games giving up 27.4 points a game.

The Yellow Jackets have been led by quarterback Jake Dougherty who has posted 980 yards and 10 touchdowns this year. Dougherty’s backfield partner has been Jerry Lawman who is ranked 20th in Division III for rushing.

While in the past we here at The Observer have been cautious of the other team and suggested that the Spartans be wary of talented opposition, the team has coasted in their past matchups with little concern for who they were playing. As such, here at The Observer, we are already all set to predict a 42-21 victory for the Spartans. With all excitement surrounding the Homecoming game, the Spartans will be able to excel and bring home the win.