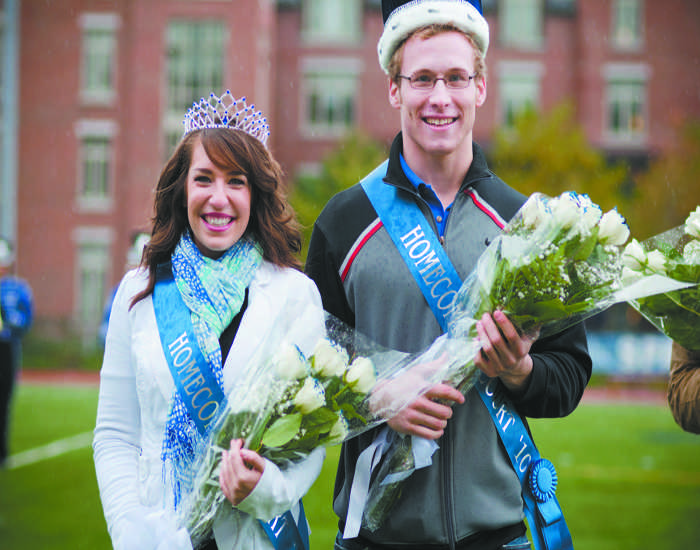 This past weekend’s Homecoming festivities brought out the Spartan spirit in the Case Western campus. Regardless of what seemed to be the rain-beyond-the-possible, which persisted throughout the morning and into the afternoon’s game, students and alumni alike came together to support the university.

The day started off with the annual Homecoming parade. Entrants gathered on Bellflower Road near KSL prior to the parade’s start. It wasn’t long before the rain soaked everyone’s clothes, costumes and banners. However, in spite of the wind and the water, many members of the campus turned out to watch their classmates. “There were people all along Bellflower and Juniper Roads,” described Marching Band member Ian Dimayuga.

The blue and white crowd dominated the stadium stands as the game kicked off. “The game had higher attendance than CWRU’s other home games,” said Dimayuga, as was to be expected. Alumni took up more of the stands than the students, but spirit radiated through the crowd. “It helped that there were several fans that lead the crowd,” remarked Spartan cheerleader Shane Jeffers, “like the four students who painted themselves in CWRU colors and stood in the front.”

As the game drew closer to halftime, the student section swelled steadily in anticipation of the announcement of Homecoming King and Queen. The previous week of relentless campaigning turned the CWRU campus into a flyer exhibition, with smiling faces and witty puns on every door, wall, window and bulletin board in sight. The hours of chalking and baking cookies paid off for this year’s Homecoming Court. Seniors Gary Bhagat of Undergraduate Student Government, Jake Kenney of Beta Theta Pi and Eben Via of Sigma Nu comprised the King’s Court, while senior Emily Witte of Sigma Psi and juniors Alexa Fiffick of Phi Mu and Charlotte Greene of Delta Gamma made up the Queen’s Court. Prior to the announcement, the Marching Band performed a stellar halftime show, featuring a break-out dance session during the jazzy “Hey Pachuco,” and a medley of Billy Joel songs. The band also played on the Homecoming theme of “Dream beyond the Possible” with a rendition of “When You Wish upon a Star,” wowing the crowd as they morphed into a giant star. Queen’s Court member Emily Witte even played with the band, donning a shako along with her Court attire.

Finally, the results were announced to the crowd, which was shrieking so loudly the outcome could barely be heard. Eben Via and Alexa Fiffick were proclaimed the Spartan King and Queen. For each, the title had a special significance. Via is the fourth consecutive Sigma Nu to earn the title of King. Other Homecoming winners were also announced. Delta Gamma and Sigma Nu’s joint parade entry won the grand prize, while the Office of Multicultural Affairs won the honor of best-decorated campus space.

Many students trickled out of the stadium following the announcement, missing what may have been the most exciting point of the weekend. With about a minute and a half to go, Allegheny College shocked the Spartans with a 90-yard touchdown run that tied the game. As the game drove into overtime, each team rallied to win and scored a touchdown. However, in a valiant maneuver, the Spartans blocked the Gators’ extra-point kick, securing a CWRU victory. “The fans were really responsive,” reminisced Jeffers. “At the end there, when the kick was blocked, they were absolutely deafening.”

The night also provided students with entertainment in the form of University Program Board’s Homecoming Dance. The dance was originally regarded with some skepticism by students for its choice of location in the Spot, particularly after last year’s dance was held at a nightclub in Cleveland. However, the dance proved to be a great event. UPB transformed the Spot into what resembled a futuristic cloud, consistent with the dance’s theme of “Spartans on Cloud Nine.” Illuminated solid globes were spread out across the floor, cycling through the color spectrum and casting their hues on the white curtains and furniture. It was a spirit-filled ending to a day that had truly been a Spartan Fantasy.