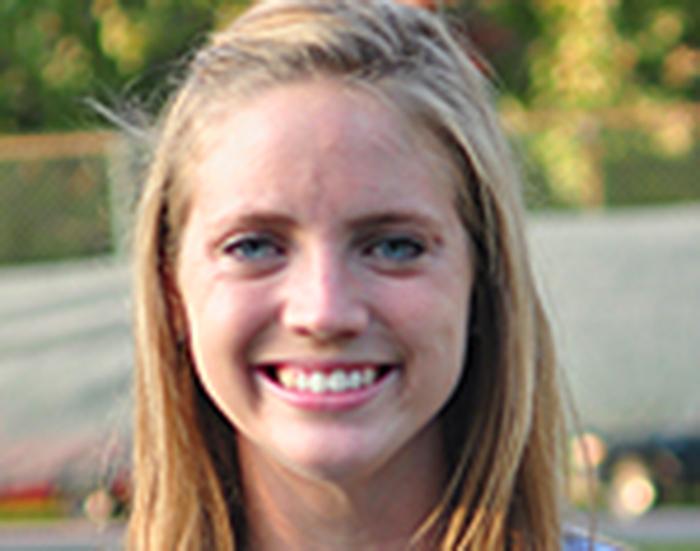 Kathleen Evers is a senior on the women’s tennis team. Evers is from Cincinnati and is majoring in psychology, with minors in health communication and medical anthropology.

Ben Yavitt: Welcome to this week’s edition of the Spartan Spotlight. You know the drill. How long have you been playing tennis?

BY: Impressive. Eight years ago I could barely swing a tennis racket without hitting myself in the face. What inspired you to start playing?

KE: My freshmen year of high school I tried out for the tennis team because my dad was going to make me run cross country and I needed to find another fall sport to get out of running.

BY: Was tennis the best choice? I bet you end up running pretty far in one of those matches, even if you don’t go more than 20 feet at a time. Do you have any extra curricular activities?

BY: I am beginning to see the pattern. Lets here about your favorite athlete. Who is it?

BY: That’s more than one person, but okay. Do you have any athletic honors?

BY: Real impressive streak. What about the academic honors?

BY: Oh yeah. For a second there I forgot we go to Case. Tell us about your best tennis memory.

BY: Ouch. That’s your favorite memory? I don’t know if I want to hear your worst tennis memory. Lets hear it anyways.

BY: For once, you can’t blame the food poisoning on Fribley. Lets hear your favorite quote.

BY: True wisdom from a coach. That quote sounds like it came right out of Yogi Berra’s book. With that, where do you see yourself in 10 years?

BY: Honestly, any job would be quite enjoyable. Good choice though. What makes tennis stand out from other sports?

KE: College tennis is an individual sport and a team sport at the same time.

BY: Wait. How does that work? You can’t explain that… Let me ask you, would you rather be able to fly, have the strength of 1000 women, or be invisible?

BY: That doesn’t really help with tennis. I would have thought you would pick super strength for those slam shots. All right, if they made a movie about your life, who would play you and why?

BY: Except for being married to Orlando Bloom, but those are just details right? What is your least favorite part about tennis?

BY: Are they as bad as the badminton divas? I can’t stand them. Okay, everyone wants to hear this one. If you were a guy for a day, what would you do?

BY: It’s a lot harder than you think, but good luck. If you could participate in any other sport, which would you pick and why?

KE: Dance. I have moves.

BY: Yeah, I guess those don’t really come out on the tennis court. Or do they… What might we find in your locker that might surprise us?

KE: The day the tennis team has lockers…

BY: A sore spot, I see. It’s okay; your rackets seem to fit into a backpack perfectly. What is the one thing that most people don’t know about tennis?

KE: How to keep score

BY: This is true. When we played in gym class, we found it was easier to not keep score at all. What goes through your mind during a match?

KE: If I’m up in the match, I try not to think too much. I just take each point at a time. If I’m down, I usually call myself fat, slow, pathetic, or a cow.

BY: Whatever works for you. What is the high point of the season?

BY: Perfectly timed for when it is snowing in Cleveland, I presume. Who is the best athlete you have ever competed with and why?

BY: Any insights on how the season is going so far?

KE: Fall season was great; we have a lot of depth and a talented freshman class. The spring should go very well, I’m excited for it.

BY: Well, rest up now and get ready to go in the spring. Good luck to you!