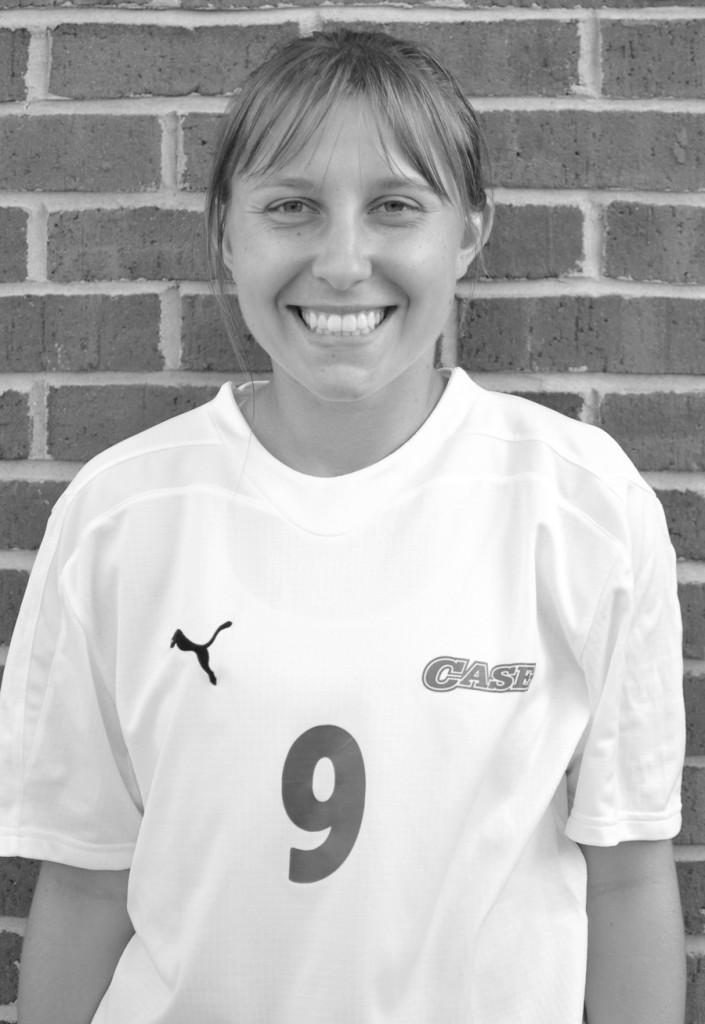 Kristina Vaci is a junior defender on the women’s soccer team. Vaci is from Mentor, Ohio and is majoring in biomedical engineering.

Peter Cooke: So how long have you been playing and how’d you get started in soccer?

Kristina Vaci: I’ve been playing for 16 years, my Mom and Dad just kinda signed me up one day and it was better than ballet class.

PC: What are some of the things you do off the field?

PC: Shenanigans are always an old favorite, nothing like a good prank war. So who’s your favorite athlete?

KV: Wayne Rooney from England, he has so many tricks!

PC: Just Roo it!! Nothing like a finding another ManU fan, though the Berb took the treble last week against Liverpool, Rooney will always be my number one. What are some of the honors you’ve won while playing at Case?

KV: Last season. We took names and kicked butt, coming in fourth in our conference. We saw their numbers!

PC: Last year was definitely a great success for the team and it looks like you guys are emulating it fairly well this year. What’s your worst soccer memory?

PC: Easy now, those are some fighting words. So, what makes soccer stand out from other sports?

KV: Soccer is 90 adrenaline filled minutes between you and a ball. Nothing better.

PC: Kristina, what would you consider your favorite quote?

KV: “The best things in life are not things.”

PC: That’s a little too deep for me. If you could invite any 3 people to dinner, living or dead, who would it be and why?

KV: Mac, Dennis, and Charlie from It’s Always Sunny in Philadelphia. I love that show and know it would be the funniest dinner with milk steak, kitten mittens, and some wine in a pepsi can. Dee can’t come because she’s not really part of the gang.

PC: As long as you have your milk steak boiled over hard, a side of raw jelly beans and some human meat you should be ready to go. You’d better being having that dinner in a D&B because there’s you can’t get a finer steak in an arcade setting. If you were to have a movie made about your life, who would you choose to play you?

PC: That may be hard to sell to the Hollywood big-wigs, but I’m sure you can pull it off. What’s your least favorite thing about soccer?

KV: The Beep Test. Whoever the Bucky and Kelly are that wrote it…they had better watch out.

PC: I’ve heard of this so called test and I can sympathize, if you need a hired gun hut me up. If you could play any other sport, what would it be and why?

KV: Extreme ghosting, it’s an underappreciated art that requires talent, poise, and the nimbleness of a cat.

PC: I may be good at this “ghosting”, I’m like a cat, I always land all on fours. What would we find in your locker right now that may surprise us?

KV: A bow, some arrows, an orc or two…nothing out of the ordinary.

PC: Alright Legolas, that’s enough bragging out of you. So Kristina, what goes through your mind during a match?

KV: Depending on the match, either how much I want to just run forward with the ball or the next song for our soccer teams a capella group, defensapella. Boom Boom Pow and I’ll make Love to You are currently in the making.

PC: A capella is a severely underutilized genre. You should cover K’Naan’s “Wavin Flag.” Finish this sentence: “Soccer is like a guy…”

KV: Because finishing is key.

PC: Ouch, no holds barred eh? Who’s the best athlete you’ve competed with and why?

KV: Maeve Goede. She snailed me so bad.

PC: That’s why you have to salt the snail. Kristina, any insight on to how the season is going so far?

KV: Going to the playoffs. No doubt in my mind.

PC: Sounds like a woman on a mission. Rest of the UAA, watch out!