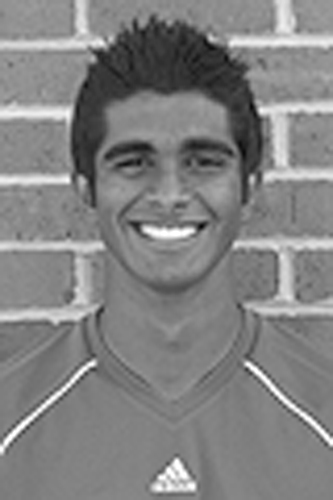 Niro Wimalasena is a junior captain on the men’s soccer team. A centerback for the the team, Wimalasena hails from Mason, Ohio outside of Cincinnatti. He is a chemical engineering major.

Peter Cooke: So how long have you been defending on the pitch?

PC: That’s a long time, apparently practice does make perfect. You’ve reeled in a bunch of awards over your first two years, what are all your honors on the field?

PC: That’s a few too many acronyms to keep track of. As a Chem. E. you must have a few awards in the classroom as well.

NW: Gamma Sigma Alpha (Greek Academic Honor Society), and I’m part of the Who’s Who Among Students in American Universities and Colleges.

PC: What are some of the things you do off the field at Case?

NW: I’m the Vice President of Ritual of Delta Tau Delta Fraternity as well as the Director of Public Relations of the Case Association of Student Athletes.

PC: Sounds like you’ve got a bunch of experience so far, what’s the life of Niro look like in 2020.

NW: Hopefully working for a Fortune 500 company like Procter and Gamble with a wife and two kids.

PC: Sounds like you’ve got everything planned out. So what makes soccer stand out from other sports.

PC: Freshmen goalies? I’m sure there has to be a story there. If you could invite any 3 people to dinner, living or dead, who would it be and why?

PC: Sounds like some of the other guys you’ve played with are an interesting bunch. If they made a movie about your life, who would you want to play you?

PC: Kumar? Really. I don’t think he’s got the goods to pull it off. What other sport would you play if you had the chance?

PC: Sticking to your roots, I like it. As a Irishman we just eat potatoes. What would we find in your locker right now that might surprise us?

PC: I had to google that, luckily it’s not as raunchy as it sounds. What’s the one thing that most people don’t know about soccer?

PC: I’ve tried and sad to say, I don’t think the Case Police see eye to eye on that. Finish this sentence: Soccer is like a girl because…

NW: you can put in the work for 90 minutes and still not score.

PC: I guess that’s why they have extra time. What’s the high point of the soccer season. NW: Chocolate milk after games

PC: Forget Gatorade, milk is the drank of champions. Who is the best athlete you’ve ever competed with and why?

PC: I might agree with you. He does have very raw, gangly, awkward speed. Any insight on how the season is going so far?

NW: Season is off to a pretty good start. We just need to keep taking it game by game and I believe we’ll encounter success.

PC: It’s working for you so far. Keep up the good work.