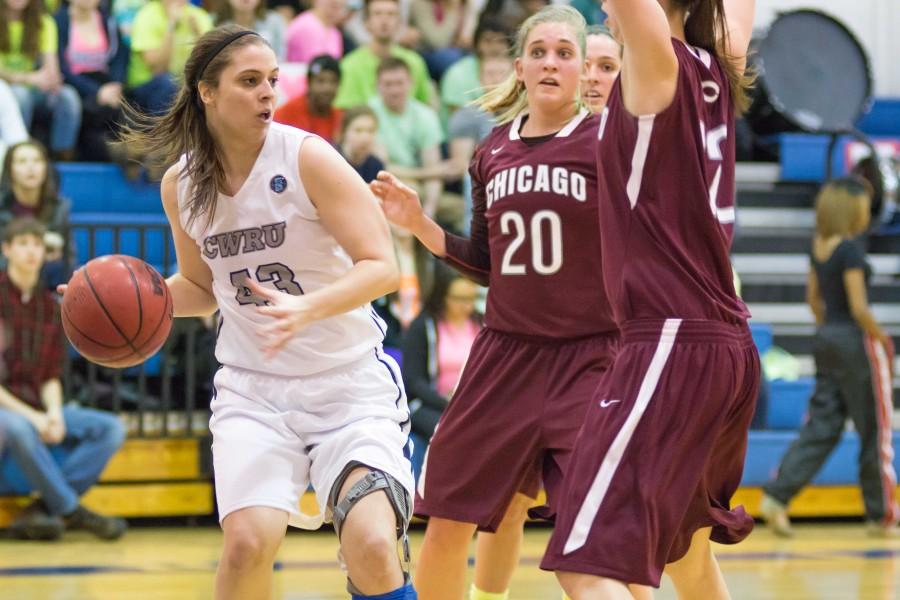 Rachel Beaty brings the ball up court against the visiting Chicago Maroons.

The Spartans continued their slide as the women’s basketball team dropped its sixth straight.

The Case Western Reserve University squad was unable to upstart their offense this weekend, as they lost to the University of Chicago and Washington University in St. Louis, both for the second time in as many weeks. The pair of losses drop the Spartans to five under .500 and to 1-7 in University Athletic Association play.

The Spartans kicked off the weekend in front of a packed Horsburgh Gymnasium for Neon Night, complete with pizza and smoothies. The women’s squad fell by a score of 63-44 to the visiting University of Chicago Maroons.

The Chicago defense held the Spartans to a season low in points on Friday night as the high scorer for the CWRU squad was sophomore guard Jessica McCoy who put up nine points.

The Spartans, while unable to mobilize their offense did spread the court, as both freshmen Kara Hageman and senior Brooke Orcutt managed to add eight points each. The Maroons on the other hand had three players in double digits.

The Spartans fell behind after Chicago rattled off eight in a row to jump to a 16-7 lead. The Spartans had two long stretches of scoreless action in the first half, totaling over seven minutes of play without a bucket. Despite the rough start, the Spartans put up the last seven points of the half to gain a little momentum and head into the locker room at a mere 11-point deficit.

The Spartans pulled as close as three possessions, down by seven, as the Orcutt hit a nice jumper. However another shooting drought followed and a 9-2 run gave the Maroons a solid led and the eventual win.

The Maroons dominated the Spartans in the paint, outscoring CWRU 38-16, and the Spartans continued their high turnover rate, which has hurt their squad, giving up the ball 24 times.

Looking to bounce back, the Spartans faced off against the Washington University Bears. The Spartans were able to score 21 points more than their previous outing but still fell to the high-powered offense of the Bears by a score of 89-65.

Hageman put up 15 points and a double-double to lead the Spartans in the loss, career high numbers for the freshman. Hageman pulled down 10 boards off the glass to complete the double-double. She was helped by Laura Mummey, who also scored in double-figures with 12.

The Bears, who sit tied atop to conference and are nationally ranked—a disputed 6th or 9th in the nation according to separate polls—played at a higher level than the Spartans, who struggled to keep up. The Bears led by 21 at the half, with the Spartans down 44-23. The largest lead of the game was 31 for the Bears, as their offensive might was too much for the Spartans to overcome.

The Spartans now head back out on the road to face off against New York University tonight, Friday Feb. 13, and then take on Brandeis University on Sunday.