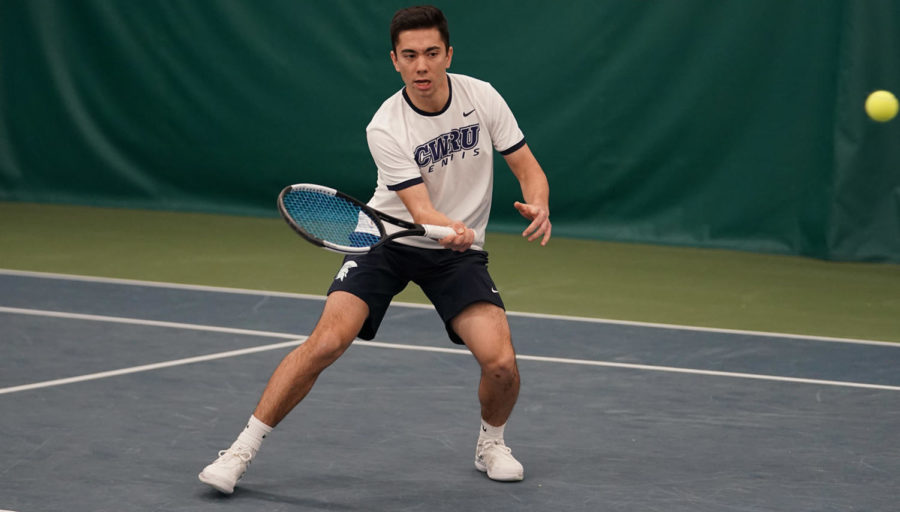 Graduate student Jonathan Powell won all but one of his matches in the last three regular season competitions.

Over the past two weeks, the Case Western Reserve University men’s and women’s tennis teams ended their respective regular seasons with winning records. The CWRU men’s team, which was No. 1 ranked DIII, finished off their season with victories against No. 31 Kalamazoo College and No. 22 Carnegie Mellon University, as well as a tough loss against the DI No. 6 University of Michigan. The CWRU women’s team, which was No. 12 ranked in DIII, fought a plethora of injuries, and dropped their regular season-finale to No. 11 CMU. The men’s team overall record improved to 19-3 and the women’s team ended with a 15-2 record for the regular season.

CWRU’s men’s tennis team started the last leg of their regular season on April 10 against Kalamazoo and Michigan at the University of Michigan. The Spartans started off the day with a strong 9-0 victory against Kalamazoo. Second-years Vishwa Aduru and Sahil Dayal led the way in doubles play with a dominant 8-2 victory over their opponents while fourth-year Chaitanya Aduru and third-year Michael Sutanto followed with an 8-2 victory in third doubles. Third-year James Hopper and graduate student Jonathan Powell ended doubles play with an 8-6 victory, making CWRU’s advantage 3-0.

The Spartans continued their momentum into singles play where first-years Ajay Mahenthiran and Ansh Shah opened with swift 6-1, 6-0 and 6-0, 6-2 victories, respectively. Vishwa Aduru, Sutanto and first-years Pranav Ikkurthy and Casey Hishinuma wrapped up singles play with their own wins to complete the 9-0 sweep.

CWRU did not fare so well in their second match of the day against Michigan, the No. 6 ranked team in DI tennis. The Spartans initially started off strong with early leads in two of the three doubles matches. Unfortunately, Michigan claimed the double point—the match was played using DI scoring—with Hopper/Powell losing 6-4 and Vishwa Aduru/Dayal losing 6-1, leaving Chaitanya Aduru and Sutanto’s match unfinished.

The men’s tennis team finished the regular season traveling to Pittsburgh, Pennsylvania where they had another dominating 9-0 victory against No. 22 CMU on Saturday April 16. Vishwa Aduru/Dayal struck first with an 8-1 win while Chaitanya Aduru/Sutnato followed with an 8-3 victory. Hopper/Powell finished up doubles play with an 8-3 win.

The No. 12 ranked CWRU women’s tennis team, meanwhile, traveled to the Oxford Athletic Club in Wexford, Pennsylvania to face No. 11 CMU this past Saturday, as well. Unfortunately, the Spartans dropped the regular season finale 7-2.

“It was obviously a little disappointing ending the regular season on a loss and with players battling sicknesses and injuries,” said Katherine Wang about the regular season finale. “However, we’ve had a great season overall and everyone’s been showing up and giving it their all every time they step out on the court.”

When asked about the upcoming University Athletic Association Championship, Wang added, “I think we’re all eager and ready to play UAAs. It’s the first UAAs for all of us which is pretty exciting. I don’t think we’ve had a conference tournament for the past three years, so everyone’s looking forward to compete this weekend. We’ve put in the effort and hard work throughout the season so we’re just looking to leave it all out on the court this weekend.”