Spartan track and field flourishes in dual meet against Oberlin 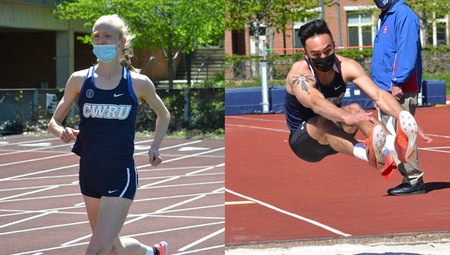 The Case Western Reserve University men’s and women’s track and field teams shone this past Saturday in their second dual meet this season against Oberlin College, this time at home.

In this unscored event, the two Spartan teams racked up 25 first-place finishes during the afternoon. For the women’s long-distance runs, first-year Grace Jackson took first place in the 800-meter run with a time of 2:26.55. In the 1,500-meter run, third-year Susanna Henry won the event with a time of 4:57.49, while fourth-year Elise Epstein brought home a second-place finish of 5:30.43.

Finishing off the long distances, second-year Cecilia Zielke took first place in the 10,000-meter run with a time of 37:10.52 and fourth-year Kiera Olson took second place with a time of 38:12.85. First-year Sierra Williams also brought home a first-place win in the 3,000-meter steeplechase with a time of 11:57.76. The 4×400-meter relay team consisting of second-years Mia Kilroy and Melissa Phung, third-year Grace Bentley and first-year Anna Zinsser won the event, completing the distance in 4:19.75.

The women’s team’s success continued in the short distances as the team swept the 200- and 400-meter dashes. Fourth-year Julie Hines won the former with a time of 26:52 and first-years Emily Hopkins and Zinsser took second and third place, respectively. Zinsser also took second place in the 400-meter dash, completing the distance in 1:02.50, a mere 0.58 seconds behind fellow first-year Elise Moore who had a time of 1:01.92.

In the 400-meter hurdles, second-year Mia Kilroy brought home a first-place win with a time of 1:06.72, which was 13.73 seconds faster than Oberlin’s second-place finisher. Meanwhile, Zinsser, Moore, Hopkins and Hines ran the 4×100 relay in 50.58 seconds, earning yet another strong victory for the Spartan women.

Hopkins tallied another podium finish in the field events as well, placing first in the triple jump with a 11.21-meter jump. Second-year Shelby Cooper also won the pole vault with a 2.89-meter mark.

In the throwing events, fourth-year Emma Hammelef threw the hammer 42.49 meters, earning a first-place finish in the event. She also secured second place in the shot put, launching for an impressive 10.45 meters. First-year Adrienne Wachtman won the javelin throw with a 36.36-meter mark and also took second-place in the discus throw.

The men’s team similarly had a remarkable performance this past Saturday. The Spartan men dominated the long-distance runs, winning most of the events. Second-years Robert St. Clair and Liam O’Reilly took first and second place, respectively, in the 3,000-meter steeplechase with times of 10:09.25 and 10:19.18. Fourth-year Michael Klein won the 10,000-meter run with a time of 32:38.57.

The men’s long-distance prowess was on full display as they swept the 800-, 1,500- and 5,000-meter runs. Third-year Logan Singer won the 800-meter run with a time of 1:55.80 and second-years Parker Straight and Will Dehmler took second and third place, respectively. In the 1,500-meter run, third-year Christopher Heermann took first place with a time of 4:17.55, while graduate student Jonathan Haling and third-year Rahul Mikkilineni finished in second and third place, respectively. Finally, in the 5,000-meter run, the Spartan men took the top seven places, with second-year Jack Begley ultimately emerging as the victor after completing the distance with a speedy time of 14:49.53.

The short-distance events saw second-year Pierce Boucher win the 400-meter hurdles with a time of 1:00.21. In the 400-meter dash, first-year Andrew Baierl took first place, completing the distance in 52.08 seconds. Third-year Juan Perez and Haling also notably finished second and third-place, respectively, in both the 100- and 200-meter dashes.

The greatest performances from the men’s team may have unfolded in the field events. Third-year Ben Brisman won both the discus throw with a mark of 33.77 meters and the hammer throw with 43.37 meters.

In one of the most stellar individual displays at this meet, second-year Ben Pinkowski won three events and finished no lower than second in most of his other events. For the high jump, Pinkowski reached 1.90 meters, and first-year Yusuf Shaaban placed second with 1.77 meters. Pinkowski jumped 6.21 meters in the long jump and Shaaban took second place again with 6.02 meters. In the javelin throw, Pinkowski took first place with a throw of 43.85 meters. He also placed second in the discus throw and the triple jump.

Looking back on this short season, the CWRU men’s and women’s track and field teams have proven their dominance in every meet so far. With their first dual meet against Oberlin on April 17, the teams kicked off the season with a bang by winning many of the day’s unscored events. They then took their success to the following weekend’s first scored event of the season, the Wittenberg Quad Meet against Albion College, Wittenberg University and Kenyon College. There, the CWRU teams clinched first place overall with the men’s team scoring 89 points and the women’s team recording 114.5 points.

With all their success this season, the teams should be relishing their next opportunity to compete, which will be at the Mount Union Last Chance Meet in Alliance, Ohio on Wednesday, May 19.