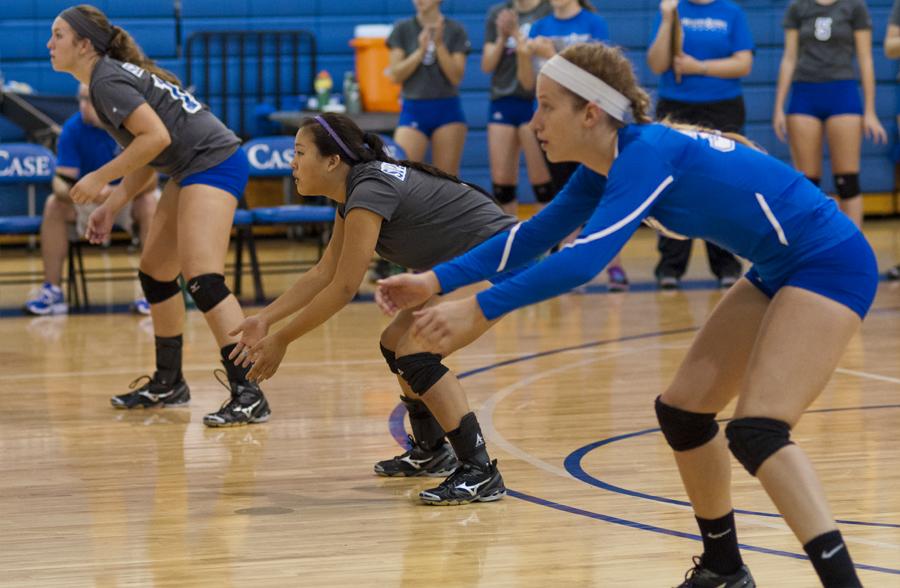 The Spartan volleyball team is 4-5 entering into the third week of its season this weekend. After a week at home competing in the 15th annual Marcia French Memorial Tournament and facing off against Mount Union College on Wednesday night, the ladies are looking to improve to a winning record in their upcoming matches.

The Marcia French Memorial Tournament got off to a great start for the Spartans on Friday afternoon when they bested the John Carroll University Blue Streaks in four sets with scores of 25-20, 15-25, 25-16 and 25-23. With an aggressive game, the team tore through the Blue Streak defense for this decisive win. With an energetic home crowd, the ladies their second match against the Buffalo State Bengals strong, taking the first set 25-14 before dropping two straight with scores of 18-25 and 13-25. In a critical fourth set, the ladies stepped up with a 25-18 win before losing the final set and the match with a score of 12-15. The team got results from many of its veteran and rookie players with sophomore Carolyn Bogart leading the attack with 35 kills on the day, receiving help from freshman Lauren Gurd with 81 assists and defensive players sophomore Katie Best and freshman Julie Colianni with a total of 80 digs during the two matches.

Two more challenging opponents were lined up for CWRU on Saturday when they faced off with the Geneva Golden Tornadoes and the Capital Crusaders. Challenging every point, the Spartans played well at the net against Geneva College, but found themselves down two sets to zero with scores of 23-25 and 24-26. Despite a hard-fought win in the third set with a score of 25-20, the ladies were unable to stop the Geneva offense and lost the final set 23-25. With only one match left, the ladies had one chance to keep their .500 record. The Capital College team had been playing well throughout the tournament, which didn’t bode well for the inexperienced Spartan squad. However, despite the high level of play on both sides, the Spartans beat the Crusaders in decisive fashion, winning three straight sets with scores of 25-22, 25-12 and 25-19. Freshman Isabelle Wagner shone in day two, serving up 27 kills and only five errors, earning a spot on the All-Tournament team. Wagner was assisted by several outstanding players in the front of the court including Bogart, Gurd, Junior Natalie Southard, Sophomore Haley Kauffman, and freshmen Kenya Moyers and Kristen Mitchell.

When asked about the surprising turn-around in the Capital match, coach Karen Farrell gave credit to the leadership on the team giving the other players confidence and motivation to play at their best level. “I want to think we hit a new peak,” Farrell said, “The match was the best we had played up to that point.” The squad performed at an entirely new level for the last match of the tournament and was looking to keep the momentum going against nationally-ranked Mount Union on Wednesday night.

Unfortunately, the Spartans were unable to match up against No. 9 Mount Union University. The Purple Raiders won in straight sets as the Spartans were bested at the net by the dominant offense of their opponent. The team recognized the skill of their counterpart in this match and did well to stay motivated, going on several scoring runs late in the sets. However, they weren’t able to get anything going before losing in straight sets with scores of 19-25, 14-25 and 13-25.

After most of the starting team graduated last year, the Spartans are still struggling to find their rhythm. Many of the positions are still in flux with first-year players being asked to perform at a high level to win their spot on the starting squad. Farrell expects that as the ladies gain confidence and experience, the level of play will rise to meet the high level of talent on the team. The challenges will continue the Purple Raider Classic this weekend in Alliance, Ohio. The squad will face off against Transylvania University, Hanover College and Kalamazoo College in the two-day event.