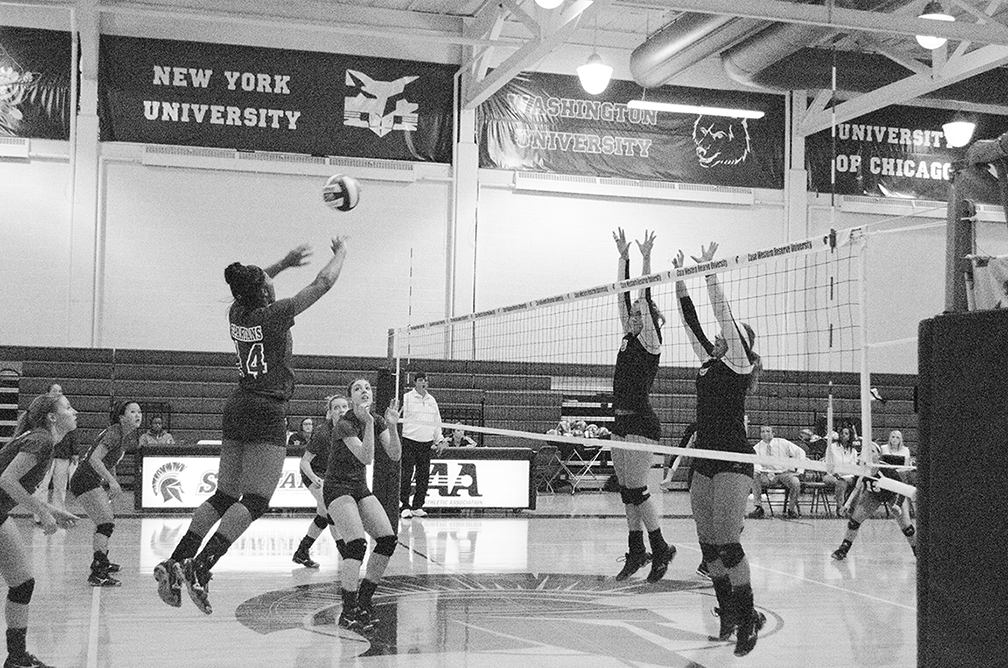 Freshman Kenya Moyers goes up for a block as the team looks on versus Heidelberg University.

The Case Western volleyball team refuses to give up and have once again bounced back to .500 after a disappointing tournament at Carnegie Mellon this past weekend. The Spartans have been plagued by injuries to their key veteran players and have had difficulty showing consistent play over the course of the season so far.

With sophomore Robyn Marks and outside hitter Carolyn Bogart missing from the court over the weekend, the team was unable to put together competitive play against top teams at the Carnegie Mellon University DoubleTree tournament. The Spartans faced difficult competition in matches with John Carroll University, Farmingdale State, Geneva College and nationally ranked Otterbein University, and dropped three of these four matches to fall to a record of 8-9.

The team split the matches on the first day of the tournament with a frustrating loss to John Carroll in straight sets, despite beating this opponent at home earlier in September. The Spartans were unable to get their front force going with only 26 kills and seven blocks during the match which was lost with scores of 17-25, 18-25 and 14-25.

Coach Karen Farrell was hoping for another favorable result against the tough rival, but knew that pulling out a win would be difficult. “It would have been nice to come away with a victory, but we’re just not as competitive without Robyn and Carolyn on the floor.”

During the second match of the day, the Spartans showed signs of hope with a dominant victory over Farmingdale State. The team spread the ball around with large contributions by both veteran players and new starters. Junior Natalie Southard tallied seven kills and freshman Isabelle Wagner contributed on defense with 10 digs. The team won in three sets with scores of 25-15, 25-10 and 25-15.

The second day brought more trouble, however, as the Spartans went in for a second match to Geneva College after losing to them earlier in the season. Fighting hard for each point, the Spartans won the first set 25-18. The team showed a lot of determination in the game with four separate players showing aggression at the net with over five kills apiece.

The defensive play was outstanding with four players logging double-digit numbers in digs on the match and 20 blocks. But this wasn’t enough as Geneva went on the attack with their service game and dominated the second set 14-25. The Spartans were edged out in third set with a score of 28-26 and went on to lose the fourth and final set 25-19.

The team had their most challenging opponent in No. 12 Otterbein University. Already exhausted from the tough match against Geneva, the Spartans couldn’t get their game together and lost in straight sets 15-25, 13-25 and 18-25.

The tournament was a challenge for the team, but many players were able to make an impact; sophomore Haley Kauffman made it to the all-tournament team with a total of 20 kills and nine blocks in the four matches. Other key contributors were Wagner with 44 digs and 25 kills, Southard with 24 kills, Katie Best with 49 digs and Lauren Gurd with 45 assists over the course of the weekend.

The team looked to bounce back at home in the first game of Marks’ return and delivered outstanding play during a competitive match versus area rival Baldwin Wallace University. The Yellow Jackets took charge early and won the first set 25-19. The Spartans had trouble with communication and with the aggressive play by the Baldwin Wallace team. However, the team fought back in the second set with a precise and determined attack that led to a 18-25 victory.

The Spartans fought for every point in the marathon third set which stretched on for seven set points before the Yellow Jackets edged out the CWRU team with a 32-30 win. With the game on the line, the team doubled down and delivered a balanced attack in the fourth set to force a fifth set tiebreaker where they dominated the Yellow Jackets 15-4.

The team relied on many individual players during this 2:15 match which tested the endurance and strength of the young team. Veterans and rookies alike rose to the pressure and delivered stellar performances. Kauffman posted up 14 kills and four blocks, adding to the offensive attack by freshmen Marian Barton and Wagner who pitched in with 13 and 12 kills, respectively. Marks returned strong, contributing 39 assists and 12 digs and defensive star Katie Best played aggressively with 29 digs.

“The team does have some resiliency, but the issue is can we execute,” said Farrell, “the same line-up doesn’t perform the same way for two sets in a row, let alone two matches.”

The team still is looking for consistency and reliability among the inexperienced team.

The squad will have a week off to heal and recover from a whirlwind schedule before hosting the University Athletics Association Round Robin tournament on Oct. 5 and 6. “We’ll be facing some very tough competition,” Farrell said, “so we definitely need to be playing our best volleyball.”