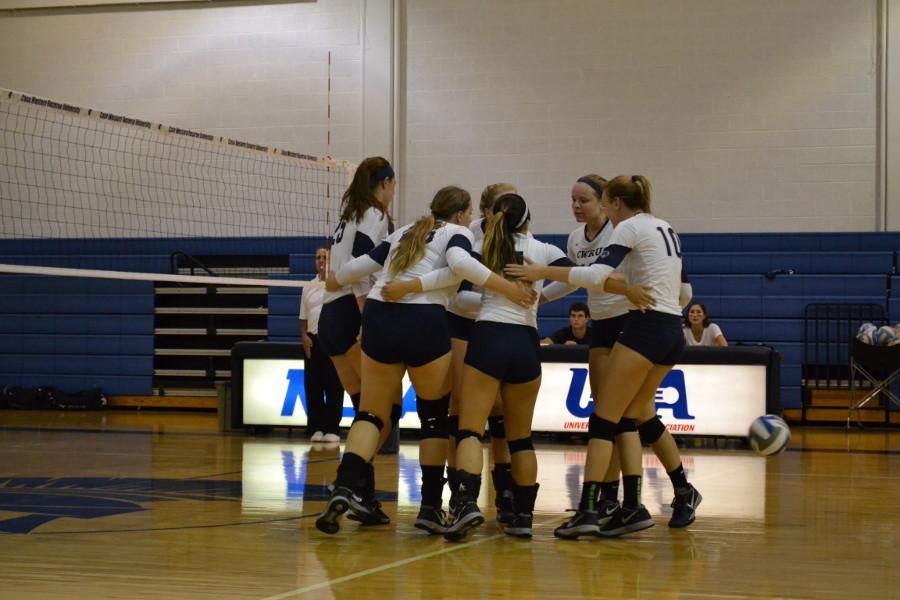 Starting the season on the longest opening winning streak under their head coach. Defeating three teams who, at the time, were nationally ranked in the top 20. Winning an unprecedented 16 matches in straight sets. And, of course, receiving a national ranking for the first time in program history.

The accomplishments of the 2015 Case Western Reserve University volleyball team are vast, perhaps the greatest in the program’s history. The team would not be playing so well without the contributions of the senior class: libero Katie Best, outside hitter Carolyn Bogart, middle hitter Haley Kauffman, setter Robyn Marks and right side hitter Dani Witri.

The seniors’ greatest strength is their experience, as all five have played consistently since their sophomore year, and Bogart, Witri and Marks greatly contributed their freshmen year as well. The team was rebuilding in two of those years as in both 2013 and 2014 the Spartans finished with a losing record.

Therefore, the seniors have experience with struggles that other top teams do not. “We weren’t coming into this season expecting to be undefeated,” said Bogart. “The upperclassmen[‘s] experience has really helped us rebound.”

At the beginning of the season, the team was clicking on all cylinders, showcasing another of the seniors’ strengths, facilitating excellent team chemistry. The focus on playing together stems from the season’s theme “each a piece, together complete.”

“We’ve always been a team of really consistent, really solid players,” said Best, as opposed to a team that relies on one or two superstars. “When we all come together as our solid selves, we do great things.” Added Witri, “When we’re playing together we have the ability to beat anyone in the country.”

More important than winning, making sure everyone on the team feels important is the main goal. “[The theme] is what we always need to tie back to,” said Best.

The seniors embrace the plucky underdog label bestowed upon them by national pundits because they win as a team and not through otherworldly individuals. No one expects the small engineering school from Cleveland to be dominant in volleyball, and the team believes an opponent’s underestimation of them will be their downfall.

“We definitely function well as the underdog,” said Best. “Everyone just goes out there with a nothing-to-lose mentality” and great things start happening.

Great things indeed, as the team rolled off 10 straight wins, culminating in 3-0 victory over rival University of Mount Union. By defeating a perennial national powerhouse, the team validated their belief that this was going to be a special season. The win was especially sweet as the seniors had never defeated the Purple Raiders before.

Of course, in every underdog story there are always setbacks the team needs to overcome in order to finally reach the highest level, and the story of CWRU volleyball is no different. After the joys of finally achieving a national ranking, the team lost two of its next four matches.

Drawing from the teachings of head coach Karen Farrell instilled in them over four years, the seniors focused the team on controlling their emotions and staying grounded by riding out the emotional roller coaster. “By keeping emotional consistency stable, everyone, playing-wise, is more consistent,” said Marks.

The seniors also helped the team keep the losses in perspective. “We have a lot of games that matter in the future, so you can’t dwell on the past or else you won’t accomplish the goals you wanted to accomplish,” said Kauffman.

In volleyball circles, the name “Case Western Reserve University” used to draw blank stares, but now those stares have turned into looks of admiration of a top-flight program, and the seniors understand that fact. “I want to be remembered as part of the turning point year,” said Marks.

Best agrees, adding, “Our legacy could be getting us on the map.”

The seniors will be honored before the team’s final home matches of the season on Saturday, Oct. 31 at Horsburgh Gymnasium, when they take on the College of Wooster at 1 p.m. followed by Bethany College at 3:30 p.m.