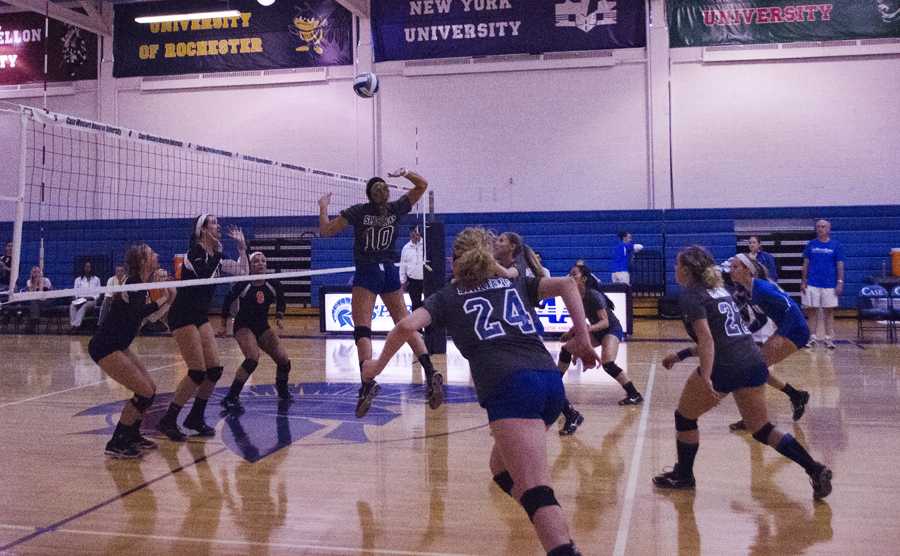 The Spartan Volleyball team met with mixed results during the opening day of the Carnegie Mellon University Doubletree Tournament. The ladies opened up the competition against John Carroll University, who they had beaten in a previous match. The Lobos got revenge on the Spartans, beating the team in straight sets with scores of 17-25, 18-25 and 14-25. Several top players on the team are out with injuries, leaving an already inexperienced team with an even greater challenge moving forward. Together the Spartans only tallied 26 kills and 24 digs during the short match.

The team clearly had motivation to up their game in the second match of the day against Farmingdale State. The team dug in against the Rams and served up a straight set victory to end the night with set scores of 25-15, 25-10 and 25-15. Junior Natalie Southard led the offense with seven kills while working with some new personnel in the line-up including freshman Tessa Cooperrider who stepped up to deliver 15 assists in what is just her second match this season. Freshman Isabelle Wagner contributed on defense with ten digs, her second highest total yet this year.

The team will look to keep the momentum going when they face-off in their own grudge match against Geneva College tomorrow during the second day of the tournament.

The CMU Doubletree Tournament is a two day event. Stay tuned for updates.