Spartan women hoop it up to start conference season 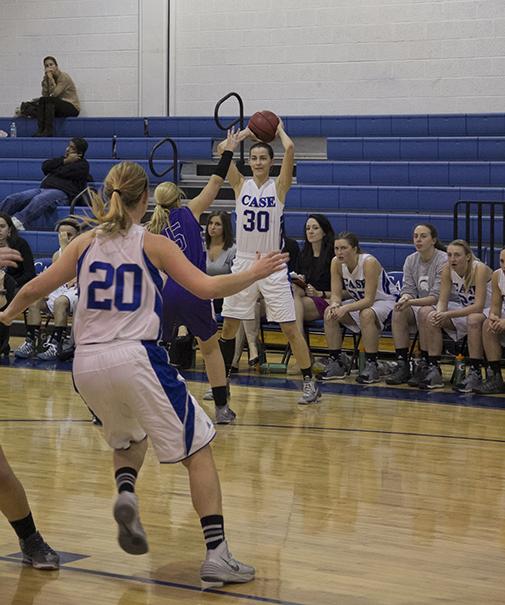 Senior Julie Mooney works to get the ball in play versus Kenyon University during their November match up.

The women’s basketball team made good use of their pre-conference season, bringing their season record to 6-5 and preparing to face off against tough University Athletic Association rivals during the rest of their season.

During the 11 early games, the Spartans had some growing pains, often showing inconsistency in the performance of the team with individual players putting up career-high numbers while others failed to make an impact. This lack of balance showed in the record up until this point, just barely over .500. Head coach Jennifer Reimer sees the progress made in the team so far as well as the ground that still needs to be covered. “Our team worked incredibly hard in the pre-season; we’ve grown by leaps and bounds from the beginning of the year. That being said, we still have room to grow.”

It looks as if the Spartans are really getting serious with a definitive win over Carnegie Mellon University last Saturday at home to bring their record to 7-5. The women had five players obtain double-digit point totals and showed a marked improvement in three-point shot conversion with a season high of 11 three-point shots scored.

On the defensive side, the Spartans captured 52 rebounds compared to the 43 obtained by the Tartans, resulting in a higher number of shots attempted. Overall, the Spartans made a strong showing in the 77-54 victory over last year’s fifth place team. Reimer is very pleased with the showing, and said, “I felt we executed our game plan, we were aggressive and worked hard. It was a total team win, everyone contributed with great energy and enthusiasm…Saturday’s performance is what I’ve expected each day from this team. We expect our players to work hard and have fun doing it. “

Last year, the Spartans ended their season in fourth place behind Emory University, the University of Rochester and Washington University. The women will be tested against these tough opponents early as they head on the road for their first road weekend of the season.

Last year’s second place team, the University of Rochester, is currently at 6-6 for their season with a harsh 43-74 loss to Emory last week leaving them hungry for their first conference win. The Spartans will then face off against last year’s UAA champion, Emory University. Emory is currently undefeated and looking for a repeat win in the conference.

Reimer and the team are up for the challenge. “Rochester and Emory are both great teams we have a lot of respect for. We will need to play great basketball to have a chance to win and I like our chances. We have great balance in our scoring that, combined with great energy, will give us a chance against anyone.”